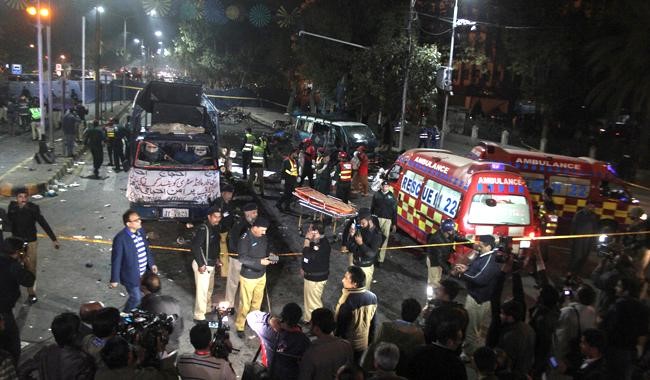 A militant faction associated with the Pakistani Taliban has put Pakistani authorities, already under pressure from the United States and an Asian money laundering watchdog, at a crossroads in their hitherto half-hearted efforts to crack down on violent groups, some of which maintain close ties to Pakistani intelligence and the military.

Jamaat-ul-Ahrar earlier this week fired its first shots in a new offensive that aims at Pakistan government, military and civilian targets with a suicide attack on the Punjabi parliament. Fifteen people were killed in the attack. The group also attacked three military outposts in the Pakistani tribal agency of Mohmand.

The offensive dubbed Operation Ghazi came as Pakistan sought to fend off potential steps against Pakistan, including inclusion on a possible revision of President Donald J. Trump’s embattled list of countries whose nationals are temporarily banned from travel to the United States, and punitive steps by the Bangkok-based Asia/Pacific Group on Money Laundering (APG). APG has been looking into Pakistani financial transaction of internationally banned groups that continue to operate with Pakistani acquiescence.

Jamaat-ul-Ahrar demonstrated its ability to force Pakistan to act against militants, no matter how half-heartedly, with its December 2014 attack on a public military school in which 141 people, including 132 school children, were killed.

The attack sparked public outrage and forced the government to announce a national action plan to crack down on militants and political violence. The plan has largely proven to be a paper tiger.

With its announcement on February 10 of Operation Ghazi and this month’s attacks, Jamaat-ul-Ahrar could force Pakistan’s government and security establishment to again review its counterterrorism strategy, employment of militant proxies in Kashmir and Afghanistan, and implementation of the action plan. The operation was named after Maulana Abdul Rashid Ghazi, a leader of Islamabad’s Lal Masjid, or Red Mosque, who was killed in clashes in 2007 with the military.

While any review is likely to amount in the short term to finetuning rather than a fundamental revision of Pakistani policies, it would probably nudge Pakistan one step closer to realizing that its strategy is backfiring and increasingly proving too costly. Pakistan has long denied supporting militant groups and has repeatedly charged that Jamaat-ul-Ahrar was a creation of Indian intelligence.

Pakistan last month put one of the world’s most wanted men, Hafez Muhammad Saeed, a leader of the banned group Lashkar-e-Tayyaba (LeT) and its alleged front, Jamaat-ud-Dawa (JuD), under house arrest. Although internationally listed as a globally designated terrorist, Mr. Saeed was restricted in his freedom of movement rather than incarcerated while his movement has started operations under a new name, Tehrik-e-Azadi Jammu o Kashmir.

Earlier, Pakistan’s State Bank, the country’s monetary authority announced the freezing of accounts of 2,000 militants that militants and analysts said did not hold the bulk of the militants’ assets.

Projecting himself as a key figure in radical Islamist opposition to the state, Maulana Mohammad Abdul Aziz, the brother of Mr. Ghazi and current head of the Red Mosque, a notorious militant nerve centre, spelled out the philosophy of the militants in a recent interview. Sporting a white wild growth beard as he sat cross-legged on a mattress on the floor of a booklined room in a rundown compound that houses the mosque’s seminary, Mr. Abdul Aziz rejected the Pakistani government’s authority.

“These corrupt rulers are not fit to rule. They don’t have moral authority. They live in wealth while the people live in abject poverty. If the state is not within the boundaries of the Qur’an and the Sunnah, we have no right to recognize its authority. Pakistan is not a Muslim country. We still have the law of the colonial power. We disagree with those who believe in democracy,” Mr. Abdul Aziz said with a mischievous smile and a twinkle in his eye.

The International Crisis Group warned in a just released report that “ethno-political and sectarian interests and competition, intensified by internal migration, jihadist influx and unchecked movement of weapons, drugs and black money, have created an explosive mix” in Karachi, Pakistan’s largest city. The report said the city was a pressure cooker as a result of a failure of government policy, lack of action against militant and criminal groups, and “a heavy-handed, politicised crackdown by paramilitary Rangers.”

The report noted that “anti-India outfits like the Lashkar-e-Tayyaba/Jamaat-ud-Dawa (LeT/JD) and Jaish-e-Mohammed continue to operate madrasas and charity fronts with scant reaction from the Rangers or police.”

The ICG called on federal and local government to “replace selective counter-terrorism with an approach that targets jihadist groups using violence within or from Pakistani territory; regulate the madrasa sector; and act comprehensively against those with jihadist links.”

Pakistan has a vast number of uncontrolled madrassas or religious seminaries that are run by militant groups, many with close ties to Saudi Arabia’s ultra-conservative religious establishment, that teach an intolerant, supremacist, often sectarian interpretation of Islam. Complicating any government effort to supervise madrassas, is the fact that the government has no reliable data on how many seminaries exist.

A military campaign in 2009 against the Pakistani Taliban in the country’s tribal areas prompted the group to set up shop in Karachi. Its estimated 8,000 operatives in the city heightened tension and increased levels of violence.

“Karachi thus changed from a city in which jihadist combatants mainly rested and recuperated from fighting elsewhere to one that also generated vital funding. TTP (Pakistani Taliban)-run extortion rackets, for instance, targeted marble factory owners in strongholds such as Manghopir, while kidnapping for ransom and robberies generated additional revenue. The police were regularly attacked, bans were enforced on ‘immoral activities’ and ‘peace committees’ (mobile courts and jirgas – councils of elders) were established to win over constituents and consolidate local authority,” the ICG report said.