Several Indians commented on the person’s Facebook posts saying his participation in the storming of the US Capitol was an “embarrassment for the Indian-American community”. The Indian flag be waived at the US Capitol during the violence on January 6. (Image: Twitter/@VincentPXavier)

The Indian flag spotted during the storming of the US Capitol building by supporters of US President Donald Trump on January 6, with the intention of overturning the presidential election result, had sent the Indian social media space into a state of frenzy.

Social media users spent the day looking for the person who carried the Indian tricolour to the pro-Trump gathering which culminated in violence and led to the death of at least four people. The incident happened on the day the joint session of US Congress had convened to certify Electoral College votes won by President-elect Joe Biden.

The video footage of the Indian flag being seen alongside ‘Trump 2020’ campaign flags was widely circulated on social media and had also evoked strong reactions.

“Why is there an Indian flag there??? This is one fight we definitely don’t need to participate in…” Bharatiya Janata Party (BJP) Member of Parliament (MP) Varun Gandhi asked on Twitter.

Responding to Gandhi, Thiruvananthapuram MP Shashi Tharoor said: “Unfortunately, @varungandhi80, there are some Indians with the same mentality as that Trumpist mob, who enjoy using the flag as a weapon rather than a badge of pride, & denounce all who disagree with them as anti-nationals & traitors. That flag there is a warning to all of us.”

There were many others, including Shiv Sena’s Rajya Sabha MP Priyanka Chaturvedi, who expressed anguish over the presence of the Indian flag during the act of violence. “Whoever is waving this Indian flag should feel ashamed. Don’t use our tricolour to participate in such violent & criminal acts in another country,” Chaturvedi said in a tweet.

However, in the early hours of January 8, social media users started sharing screenshots of an Indian-American’s Facebook and Twitter profiles, claiming that the person was the one waving the Indian flag at the Capitol Hill.

“How many million people you need fake media to report this historic event? We got a couple, is that good enough? President Donald J. Trump is our President!” one of his Facebook video captions read.

“American patriots – Vietnamese, Indian, Korean & Iranian origins, & from so many other nations & races, who believe massive voter fraud has happened joined rally yesterday in solidarity with Trump. Peaceful protestors who were exercising our rights! (sic),” Xavier said in a tweet, tagging Tharoor and Gandhi.

“Whenever I have been to a Trump rally, I have seen people of Vietnamese, Koreans, even Pakistani origin, carrying their flags. This is also to show that such rallies are not a racist movement. So, I would not be able to hold an Indian flag and walk around if it was a racist movement,” Xavier told Manorama News later.

The 54-year-old said there were about 10 Indians in his group and five of them were from Kerala.

Xavier told the regional news channel that the aim of the pro-Trump protest was to “‘stop the steal” and to ensure that the US has a “legal President, one who has been elected in the right manner.”

“We cannot condone election fraud, anywhere… From the outside, American democracy might appear to be a strong, but here to vote, you do not require a voter ID card, there is no signature verification, you don’t have to be present in person,” Xavier claimed.

While Xavier admitted to being present at ground zero, he claimed that he did not scale the wall and enter the Capitol building. “Yesterday, one million people gathered there (Capitol Hill). Out of these, about 10-15 daring people, scaled the walls like ‘Spider Man’ and created violence. They appeared to be trained, professional thugs… They were either from our side or from the other side who tried to infiltrate our side. Eventually, the violence created by about 50 people destroyed the purpose of our rally,” Xavier claimed.

Xavier also alleged, without evidence, that individuals who scaled the walls to enter the Capitol were “BLM (Black Lives Matter) thugs who support the Democratic Party who infiltrated” their side. “There isn’t clarity about their identity. However, if you see the way they climbed the walls.” 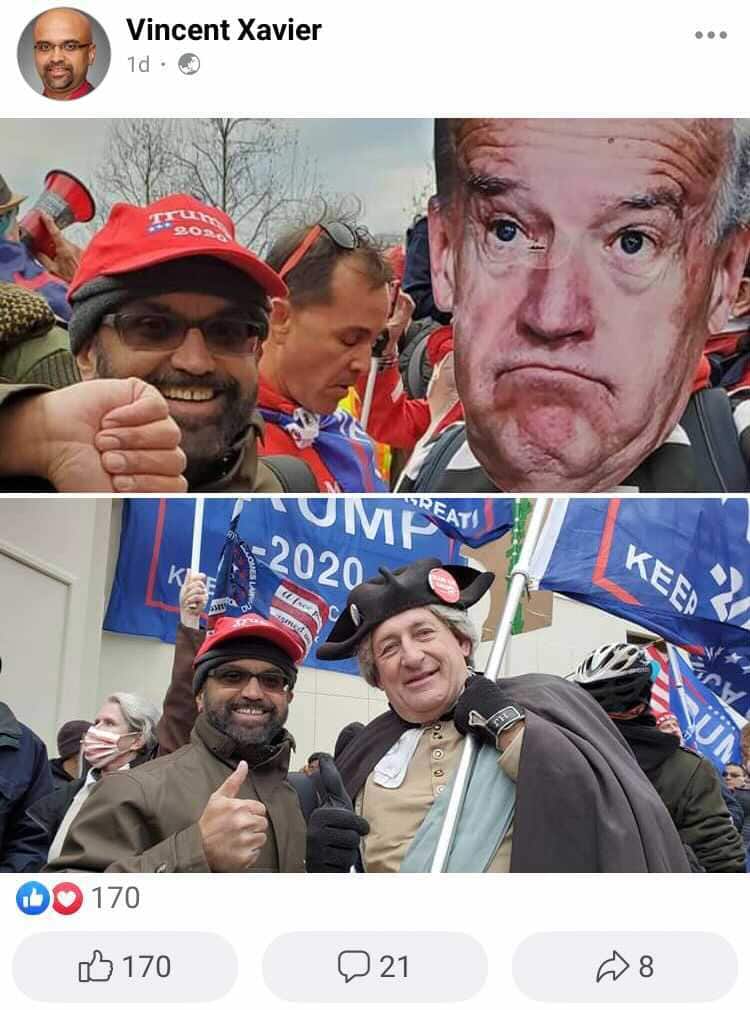 Several Indians commented on his Facebook posts saying that his participation was an “embarrassment for the Indian-American community” and “shameful behaviour”.

Moneycontrol reached out to Xavier for additional comments. This story will be updated upon receiving his response. As many as 52 individuals were arrested in connection to the violence and the Federal Bureau of Investigation (FBI), which is now probing the case, was looking for leads on more people involved in the act of violence and vandalism.

Leaders from around the world condemned the storming of the US Capitol, expressing shock at the chaos unfolding in a country they once relied upon for global leadership.

In a tweet, Prime Minister Narendra Modi said he was distressed to see news about “rioting and violence” in Washington DC. “Orderly and peaceful transfer of power must continue,” PM Modi said.

“Distressed to see news about rioting and violence in Washington DC. Orderly and peaceful transfer of power must continue. The democratic process cannot be allowed to be subverted through unlawful protests,” PM Modi said.