Justice sought for Musahar leader crushed to death in India 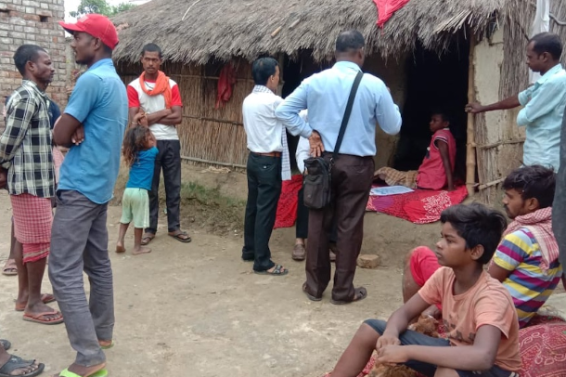 Jesuit Father Anand Kerketta (with black bag) at the house of the socially poor Musahar leader who was killed by upper-caste people over a dispute on June 10. (Photo supplied)

Catholic priests and rights activists are campaigning for the arrest of upper-caste men who crushed to death a low-caste leader under their vehicle in eastern India’s Bihar state.

“It is unfortunate that, even after a month, the police have not arrested three of the five men who deliberately ran their vehicle over their victim several times,” said Jesuit Father Jose Vadassery.

The priest, who works among the socially poor Musahar community, told UCA News on July 10 that they suspect the state police support the “powerful upper-caste men and denying justice to the poor.”

The violent incident happened late on June 6 after five upper-caste men drove into the area where the Musahar community lives in Samiya village in Madhubani district.

They picked an argument with 48-year old Lohan Saday, a community leader, over a dispute about a road to the Musahar area. As people including women and children gathered, they drove away in their Jeep, the priest said.

But they suddenly returned at high speed after switching off the lights. The vehicle ran over four people. “They ran the vehicle back and forth as the terrified people cried for help,” the priest said.

Saday was targeted and crushed. He and the other three seriously injured were taken to a local government hospital soon after the attackers left.

As Saday’s health worsened, he was taken to the nearest state-run medical college. But villagers claim that, under the influence of his attackers, the hospital denied him treatment.

The villagers decided to take him to a private hospital for treatment, but he died on the way on the same night.

Villagers say high-caste people targeted Saday because he objected to an upper-caste man’s attempt to block Musahar people’s way to the village with a building.

The upper-caste men had invited Saday for a talk about settling the dispute amicably. But they did not turn up for talks and instead abused and threatened him, they say.

“He is a victim of India’s age-old caste system,” which although outlawed is practiced in several ways, Father Vadassery said.

People of the Musahar community, seen as rat-eating people, are outside the four-tier caste system, which does not even allow outcaste people to go near upper-caste men and their locality.

“Saday died of because he was denied medical care. He died of excessive loss of blood on his way back from the government medical college,” the priest said.

Jesuit Father Anand Kerketta, who is helping Saday’s widow and other Musahar community members in their fight for justice, said police had arrested only two of the accused.

“The villagers protested in front of the local police station a week back demanding their arrest, but to no avail,” the priest said on July 10.

The People’s Union for Civil Liberties said the upper-caste men had tried to assert their rights over the land. In the caste system, the outcastes have no right to land, and the concept continues to be prevalent in Bihar.

In a seven-page report, the rights group urged the government to immediately arrest the accused and fast-track the trial so that poor low-caste people would not be deprived of justice.

It also appealed to the government to provide compensation to the widow and others injured.

Members of the Dalit Human Rights Group visited the village and demanded immediate action against the accused. They also demanded financial help to the families of those killed and the injured.