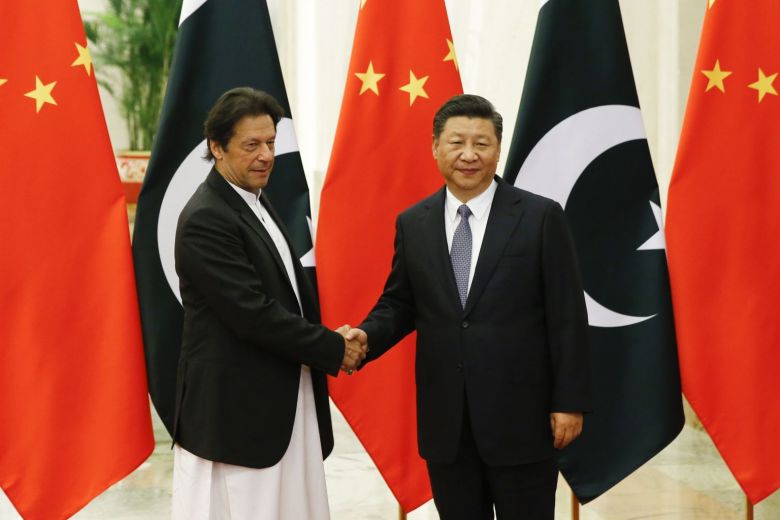 The day when Lebanon blasts occurred i.e. August 4, 2020, the same day a news was floated that Kingdom of Saudi Arabia (KSA) is clandestinely pursuing a nuclear-agenda with the help of China 1, only three days later on August 7, 2020, another  headline donned the world media that the KSA Crown Prince MbS  on October 15, 2018, had sent assassins to kill his Saudi intelligence official Saad Al Jabri who had fallen out of his favour 2 , and  on August 6, 2020 3 , Pakistan foreign minister Shah Mehmood Qureshi asked the 57 member Organisation of Islamic Countries (OIC) to convene a meeting of council of foreign ministers (CFM) on the issue of Kashmir, or else Pakistan would be forced to organise a session outside OIC,  an announcement which was to make ripples around the world.  For Pakistan it was more than clear that KSA under MbS was dragging its feet to organise CFM on the Kashmir issue since Feb 8, 2020 when its last meeting was organised in Jeddah 4 .  It may be reiterated that after India had annulled the Article 370 in JK&L on August 5, 2019, Pakistan could not evoke any support from KSA, and was instead, more vocally supported by Turkey, Malaysia and Iran apart from China which has supported Pakistan in UN all through the last year, and most lately on August 7, 2020 5  which India rejected as an attempt to interfere in India’s internal affairs.

On the same day i.e. August 6, 2020 Pakistan had to repay 1 billion USD back to KSA out of 3 billon USD loan which it had secured one and a half year back, four-months ahead of its repayment period, which of course, could happen only when China came forward to make Pakistan pay it 6 . KSA next assault came two days later, on August 8, 2020 7 , by stopping oil supply to Pakistan on the provision on loan, a move expected to make Pakistan fall flat as Pakistan has been reeling under economic duress from a pretty long time. It was in December 2019 when PM Imran Khan of Pakistan cancelled his visit to Malaysia summit on Kashmir, attended by Iran, Qatar, Turkey and Malaysia, on the behest of MbS, and Turkey President Erdogan had made it public 8  . There are also speculations that KSA might deport millions of Pakistan workers and instead induct Bangladeshis on their place. It had already deported 2,85,980 back to Pakistan for various reasons 9 .

The pressure is telling as KSA is ready to abandon its most potent and traditional friend Pakistan, as who can rightly forget as to how Pakistan saved KSA regime in 1979 after the siege of Mecca and made the regime to continue, as Iran, had then freshly witnessed the revolution, and a wave of anti-monarchy was making a start in Gulf-states. Forty years have gone past, and only did the much touted Arab Spring, brought more and more deaths and destruction on Arab streets.  Apart from what the KSA& Kuwait sponsored war had brought on Iran, which was followed by the first and second gulf-wars, in pursuit of Arab oil- which the US and West always have eyed for.

Hence, there is now to be a permanent heat around MbS, as US District court of Columbia has issued a summon against him on August 10, 2020 10 and it is an open fact that MbS had got away with the allegation of having got killed Jamal Khashogi on October 2, 2018, owing to his personal friendship with US President son-in-law Kushner 11 . But, US premier intelligence agency CIA indicted MbS in Khashogi murder 12 which US president termed as ‘premature’ 13 but the way MbS has started to ‘discussed’ in US polity, particularly when Trump is heading for November 2020 elections, is a clear signal that US establishment is not going to be ‘easy’ on MbS, despite Trump personal friendship and if Trump wins it would be a hot chase for MbS and if it goes for Joseph Biden, then MbS may be in pretty hot waters.

This renewed trouble for MbS is certainly for the deal of China-Iran for 400 billion USD on July 13, 2020 14 , and which US want to be annulled at every cost, this deal had  happened after India was ousted, which was quite likely as India-Israel-US-KSA-Japan-Australia are in a bloc while the next bloc in the making is Pakistan-China-Iran-Turkey-Russia-Malaysia. China has invested over many years in its CPEC project with Pakistan which now China wants to connect with Gilgit-Baltistan via Ladakh lying inside India,  and quite understandably, India is into a growing conflict with China in its Himalayan region.  There has been a multi-pronged strategy of US to get the deal scrapped and the KSA-Pakistan acrimony is a part of it, China has also signalled that it would connect CPEC with Chabahar ( Iran) from the Gwador port in Pakistan, as the straits of Malacca, through which the bulk of China exports pass, is all likely to be chocked by US and India 15 . India has been deep into its naval-exercises with US-Japan-Australia from quite a long time in South China sea-the next theatre of the ensuing war between China and US.  In apprehension that India would block the China life-line in straits of Malacca through help from its military base in Sabang in Indonesia 16 , China has devised a new plan, which is, that it has decided to upgrade railways in Pakistan by an investment of 7.2 billion USD by linking its Kashgar region to Gwador in Pakistan 17 , and from where China would make its goods reach Europe, US and the Mediterranean countries.

What however came as a big contrast is that while KSA is getting ready to starve Pakistan, in a two-days time, a report came that a KSA oil company Aramco is ready to invest 15 billion USD in Reliance India 18  which is nothing but a tight slap on Pakistan. But, as things would have had it, KSA wants to run the table for the sake of US who after its disastrous war in Afghanistan is all set to withdraw, thus, thereby meaning, that Pakistan is just no longer fit to be used and need to be flushed out like a condom! But, with China, the rival to US & Israel in this new emerging world scenario, coming close to Pakistan, therefore, to make a high-toll for Pakistan is what US wants to make through KSA. India, of course, is getting its huge benefits in-between this great game.

In the same backdrop it needs to be understood how Muslim nations have honoured PM Narendra Modi with their highest civilian awards, the  start of which was made when KSA honoured PM Modi  with King Abdul Aziz Award in April 2016, Afghanistan in June 2016 gave him Amir Amanullah Khan Award, Grand Collar of State of Palestine came in February 2018, and UAE and Bahrain gave him The Zeyad Medal and Kind Hammad Order of Renaissance 19 , these awards came within almost a month when  PM Modi had stripped Jk&L of Article 370 on August 5, 2019.  Leaving Pakistan red-faced.  It is a day-light fact that all the Muslim nations of Gulf are guided by US ( which is directed by Israel) whose dictates confer the highest priority , and as signs started to occur for US in Afghanistan, it was time to debase Pakistan and make India stride over. Hence, all the Gulf states make a beeline to award Modi, in lieu of what is called as ‘in exchange of their investments in India’.

No wonder, the latest turn of political events, all over the world, had got triggered when Donald Trump offered twice to mediate between India- Pakistan, on Kashmir, a bait gulped by Imran Khan on  July 23, 2019 20 , prompting Modi to  abrogate Jk& L of its special status, a fortnight later, and almost six-months later the Indian army chief MM Naravane said that India was ready to attack the Kashmir part in Pakistan 21 and on May 8, 2020 India started airing the ‘weather-report’ on Gilgit-Baltistan 22 , which is a part of CPEC, and which created an alarm in China which led to India loosing its 20 soldiers fighting with China on June 15, 2020  23 in Galwan valley in Ladakh, India.

India-US-Israel are heading for a war with China-Pakistan and which may invite other counties and it is at this juncture KSA, as a tool to US, has started to make the going-get-tough for Pakistan. The rattled Pakistan is now looking for avenues of an offer of oil supply on deferred loan from Azerbaijan 24 , an agreement which was on the cards in 2019, but due to COVID-19 could not be done. Pakistan, ironically does not have diplomatic relations with only two nations, namely: Israel and Armenia, which is engaged in a conflict with Azerbaijan.  Pakistan army chief Qamar Javed Bajwa  25 is all set to visit KSA as a last ditch-effort to salvage Pakistan-KSA relations ( after he met KSA ambassador in Islamabad) while it is expected that very soon Raheel Shareef  , the Pakistan Ex army chief who heads the 41-nation Islamic Military Alliance led by KSA (since 2017 26 ), widely construed to be an anti-Iran front,  will be given marching-orders.  It may be known here that KSA had been upset with Pakistan as the latter did not send its troops to fight alongside KSA 27  in Yemen, a country ravaged in the last five-years, and the latest to lit the fire was Pakistan PM Imran Khan interview aired on Al Jazeera  28 on August 3, 2020 in which he talked about the futility of the Yemen war..  Pakistan it is expected will convene another group, in comparison to OIC and which is likely to be attended by the new government of Afghan Taliban, who are all set to take over from Ashraf Ghani, as Ghani has conceded to release 400 Taliban prisoners 29 , as a part of the peace-deal signed between US and Taliban on Feb 28, 2020 30 . India takes Afghan Taliban as a foe.

Meanwhile, as the debris of the Beirut blasts of August 4, 2020 31 is getting cleared, fingers were pointed towards Israel, as Richard Silverstein wrote on his blog the same day that Israel Bombed Beirut 32, , the fears are coming true as a top military website of US Veteranstoday.com has carried infrared images which confirm Israel had hit Beirut with a nuclear missile 33 and now a similar strike seem to wait for Pakistan as an article on August 12, 2020 published in Haaretz 34, apparently says that Pakistan need to make friends with Israel as Pakistan rejection of Israel actually threatens the lives of its own citizens.

As more and more conflicting drama unfolds around Middle-East, India, Pakistan and China, it is learnt that China president Xi Jinping is to make a visit to Pakistan 35 the dates are yet to be finalised.  The visit amid the Chinese border stand-off with India, with US in South China sea, is going to very keenly observed in India, Pakistan, Israel, Iran and of course US.

China’s message to US: Don’t pick and choose friends over calm and storm, It is we who invented Chinese Checkers.