Is the World A Prisoner of Dead Conscious or Naked Opportunism? 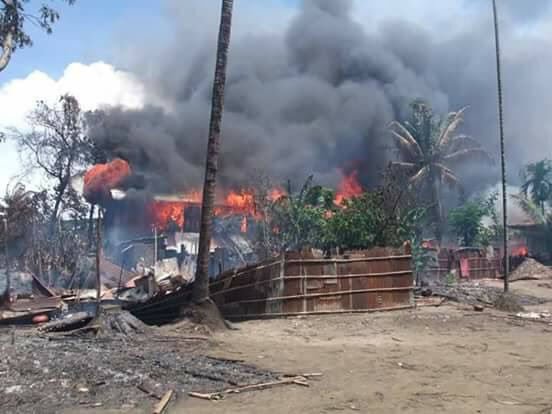 In its November 14, 2016, issue the Bangkok Post reports, “Myanmar’s Rakhine state was hit by fresh waves of violence over the weekend with more than 30 ‘insurgents’ killed during two days of fighting, the military said, as proof emerged of atrocities against villagers.” Reporting on the same incident Myanmar Observer reports that “At least sixty people, including children and women, are feared dead as Tatmadaw [Myanmar Army] fired on entire village tracts with rockets, with the death toll likely to rise. The Same report continues, “During the night raid, many Rohingyas tried to escape by jumping into the water, but Tatmadaw made sure they were hit by gunfire. The actual death toll might be higher as many of the corpses could not be pulled out of the water….Video clips from the site showed crying Rohingya mothers standing over the bodies of little children killed by the army.”

In another recent reporting London-based the Guardian reported that at the entrance to Thaungtan village in Myanmar’s Irrawaddy Delta a brand-new sign asserts, “No Muslims allowed to stay overnight. No Muslims allowed rent houses. No marriage with Muslims”. Al-Jazeera also reported cases of similar systematic eviction, rape, loot and arson of Rohingyas (the Muslims of Myanmar’s Rakhine State) by the military. Bangkok Post in another report highlights that soldiers in Shey Kya village in Rakhine State “raided their (Rohingya) homes, looted property and raped them at gunpoint.” The UN envoy on human rights in Myanmar has confirmed “repeated allegations of arbitrary arrests as well as extrajudicial killings occurring within the context of the security operations conducted by the authorities in search of the alleged attackers.”

These incidences indicate a clear pattern of ethnic cleansing. But Myanmar Government neither denies nor confirms these acts of violence against Muslims. Instead, it claims that some of the army actions are responses to ‘400 strong rebel actions’ of Rohingyas. But this claim of ‘armed resistance with foreign support’ is yet to be verified by any credible source nor has the Myanmar government named the “foreign parties.”

Saddest part is this that these cases of blatant violations of human rights against the Muslims in Myanmar, the Nobel Laureate Ms. Aung San Suu Kyi once West’s poster-picture of freedom and democracy and once herself a victim of state persecution who now heads the Myanmar government has remained unruffled and stayed away from saying much and doing little. This is disturbing especially not just that as a Peace Nobel Laureate she is expected to stand for human rights in every situation and in every location but that as the head the current Myanmar government she has the moral responsibility and administrative capacity to do something about it. Instead, she has chosen to remain deafeningly silent or at times, appallingly, evasive of the Muslim plight in her country. What is also quite tragic is that in recent times when a handful of conscientious Myanmar citizens condemned and protested in Yangon against these well-organized acts of persecution of Myanmar Muslims, Aung San Suu Kyi’s police baton-charged the protesters for ‘disturbing public order’ – a cliché often used to mask institutional suppression of freedom of protest.

The main reason why Aung San Suu Kyi is so indifferent to this protracted tragedy in Myanmar is that she is but a captive of both dead conscious and naked opportunism and that latter is feeding the former for she fears that any show of favour to Myanmar Muslims would risk her own position in the Myanmar society and this has been verified by many that she is a direct accomplice in these heinous acts of ethnic cleansing.

The World in general and West in particular are also not doing anything differently for they are prisoners of naked opportunism that has paled principles that in the emerging scenario of imperialist geopolitics they have cosied up to the Myanmar government in their China containment strategy and thus the last thing they would do is condemn the Myanmar government (more precisely, its army) that would put in jeopardy its anti-China containment chain that it believes it has successfully laid by befriending an army that is known for its shrewdness and also its blatant human rights abuses. Ethics in this context is a rude idea.

Closer to the theatre of tragedy, Bangladesh, Myanmar’s oppressed Muslims’ closest Muslim neighbour is also noticeably depressingly mute to the plights of its compatriots across the border, and this is due to its government’s policy framework that is utterly self-seeking and at times, completely unprincipled, and this is sad.

At an individual level and from his haloed position Bangladesh’s Nobel Peace Laureate, Professor Muhammad Yunus who also happens to be ethnically, religiously and even spoken dialect-wise closest to the Rohingyas could quickly bring the issue to the attention of the international community or at least to his Nobel Peace Colleague, Aung San Suu Kyi to address it, but instead has chosen to look the other way for he is but a prisoner of fear.

The world body of Muslims, the Organization of Islamic Countries (OIC) simply has neither the gall nor the moral standing to do much about the issue either for its members are too busy killing and demonizing each other – their own Muslims.

UN, the only body that can and has been raising its concerns from time to time, is but a prisoner, of its structural limitations that enable it to report but not regulate.

In a situation where institutions and individuals that matter have failed the Myanmar’s Muslims only the conscientious people of the world who are not in millions but in billions have the power to give voice to the oppressed. They, therefore, must unite and raise their voices internationally and within their own countries through their senators, congressmen, parliamentarians whoever and get their governments to raise the issue of Myanmar’s Muslim persecution with Myanmar government in the strongest of terms for if they don’t and instead choose also to remain either silent or “neutral” they, by the words of Desmond Tutu would “have opted for the side of the oppressor!”