Myanmar: Is it time for the West to Engage The United Wa State Army? Many regional observers suggest that China directs a well-trained, motivated, disciplined proxy army of 30,000 soldiers controlling territory with major cities; agriculture, mining, and industry. At one time this group was considered to be the number one producer of heroin in the world. They now appear to be a global leader in the manufacture Amphetamine Type Stimulants (ATS) – which even during the COVID-19 pandemic is ravaging countries across South and Southeast Asia.

The conventional wisdom that the United Wa State Army (UWSA) is a Chinese tool is inaccurate. Rather than being an evolutionary dead-end – the vestigial tail of their communist origins – it has demonstrated that it is an organization that has a future and may serve as an example of a model for other Ethnic Armed Groups (EAG)s. Given their resilience, and apparent openness to reducing their role in the drug-trade Western policy-makers should consider engaging the UWSA. 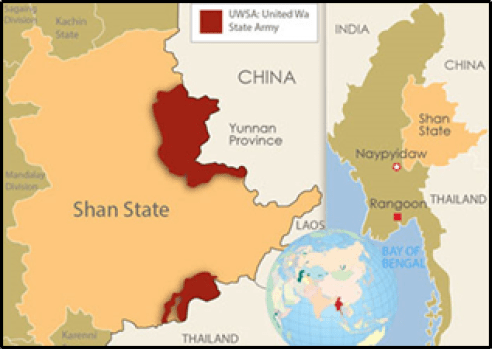 Around 600,000 Wa live in the Shan State in eastern Burma’s mountainous and forested region and are ethnically distinct from the majority Bamar population. The Wa have never been ruled by a central government; the British gave them space as they were rumored to be fierce cannibals with different customs than the low-land Burmese. The area that the UWSA administers is the size of Belgium.

In 1949, elements of the Chinese nationalist Kuomintang army (KMT) crossed into Burma and conquered most of Shan State; it grew opium to generate funds for their resistance against the People’s Republic of China (PRC). In the 1960s the PRC began supporting both the Wa and the Communist Party of Burma (CPB) to counter the KMT remnants. By the early 1970s the CPB recruited heavily from the Wa to fight the Burmese government.

In 1989 the Wa overthrew the aging Chinese and Bamar leadership of the CPB. The Wa formed the UWSA and signed a cease-fire with the Burmese military junta, which provided them de facto autonomy. In the early 1990s the UWSA aided the regime in its fight against a warlord considered to be the “’King’ of the Golden Triangle,” controlling 70% of the region’s heroin. When he was defeated in 1996, the UWSA’s was rewarded with control of his enclave along the Burma-Thai border – a lucrative location for drug transshipment and labs. The UWSA sent 100,000 civilians from its northern territory to populate “southern Wa State.” Simultaneously, the UWSA banned opium production allowing it to centralize control of the drug trade, and produce even more profitable drugs – ATS. In 2004 when their main ally in the Burmese government lost power, the Wa renewed ties with China. The UWSA and United Wa State Party run a state that remains modeled on the CBP’s Maoist structure led by a single leader. The UWSA is the largest non-state armed group in East Asia with an estimated 25-30,000 troops and 10,000 reservists.

The Myanmar government seeks to get the various EAGs to sign the National Ceasefire Agreement, but the UWSA has rejected doing so. The UWSA chairs and serves as a “linchpin” in a powerful bloc of seven EAGs (accounting for 80% of the membership in EAGs), which negotiates with the government as a group. To cement its influence the UWSA provides weapons, training, and logistical support to other EAGs. However, the Wa have avoided the Arakan Rohingya Salvation Army fighting the regime, likely because China characterizes them as “savage Bengali Muslim terrorists.”

Since 2015, the Wa have been leery of dealing with government, who attacked their closest allies and sought to capture their self-administered zone. Additionally, Napitaw demands that the UWSA vacate South Wa without compensation, which is a nonstarter for the Wa, who seek an autonomous official Wa State in a federal Myanmar. The UWSA provides competent administration in its northern territory, while the south serves largely as a transit zone for legal and illegal products. Northern Wa accesses China’s markets through its border with Yunnan Province. Its licit economy features rubber plantations, sugarcane, logging, and mining: including one of the world’s largest for tin, rare earth minerals, and jade. Criminals run a variety of profitable rackets in this autonomous zone including drugs trafficking.

Myanmar is the second-largest producer of heroin after Afghanistan. In 2005, the US Drug Enforcement Agency indicted eight leaders of the UWSA as designated “Drug Kingpins” alleging that the UWSA “is one of the largest heroin producing and trafficking organizations in the world,” operating “as a powerful criminal syndicate” with global distribution responsible for producing more than 180 metric tons of opium in 2004 alone; from 1985-2005 the UWSA trafficked more than one billion dollars-worth of heroin into the US.

“Gram-for-gram crystal methamphetamine is more valuable than heroin;” one kilogram sold in Shan State may sell for USD $3,000; that same kilo has a street price of $600,000 in Australia. High-grade “ice” is a product requiring industrial-quality production with experts, well-equipped labs, and access to precursors. Not only is the UWSA believed to be the largest producer of meth, but its’ control of a major section of the Burmese/Thai border has led to widespread corruption of the Thai border forces.

The UWSA is considered the dominant player in yaba, which is perhaps more insidious than meth. This so-called “madness drug” is a cocktail of meth and caffeine, which users burn on tinfoil to inhale. Yaba production is haphazard; small labs can set up easily, and many independents cook yaba in Wa territory and pay taxes to the UWSA. Yaba is tailormade for the working aspiring middle-classes in booming South and Southeast Asia. Unlike heroin, yaba is a stimulant and therefore, yaba users feel more productive before they become addicts.

Bangladesh has been acutely susceptible to this scourge. With a booming economy and with the world’s eighth largest population, it is a massive market. As a Muslim country alcohol is not easily available; thus dealers do not compete against beer and liquor for recreational users. Pills of middling-quality that cost 4 cents to make sell for $3 in Dhaka; high-quality pills can sell for $6.25. Traffickers take advantage of the flood of Rohingya refugees living in camps along the Bangladesh/Myanmar border. Bangladesh limits them to this region, and without work many smuggle pills cross-border as a means to make money. In 2018 the Bangladeshi government cracked-down on traffickers, arresting over 20,000 and killing more than 300 extrajudicially. Officials seized more than 53 million yaba pills in 2018. In addition to Bangladesh and Thailand, ATS have impacted four of the “Seven Sister” States of India’s northeast. The instability benefits insurgents who engage in smuggling and black-market weapons trade.

The Wa claim to have quit drugs following the DEA indictments and after their opium ban. There also release occasional statements announcing arrests and drug seizures. Cynics suggest that the UWSA is reducing competition, but some analysts believe that the Wa are seeking to “’repair their reputation.’” Leaders announced a 10-year plan to eliminate meth from all Wa areas by 2024. In 1990, the Wa felt out UN officials about ending poppy cultivation in return for assistance in recognizing their autonomy and developing alternative crops. The Wa may now be open again to this type of bargain.

Since 1968, China has been the UWSA’s largest patron. While the UWSA has an indigenous weapons manufacturing capability, its high-end equipment continues to originate from China. In April 2019, the UWSA celebrated its 30 years of independence with a military parade and invited foreign journalists to visit its capital. Experts noted many modern Chinese weapon-systems including anti-aircraft guns, and third-generation Man-Portable Air Defense Systems. There are persistent reports that the PRC has provided helicopters to the Wa. Others doubt this, though an integrated air-defense network appears to provide the UWSA with a formidable area-denial capability.

In 2000, China decided that it had enough and directed the UWSA to move drugs away from its border and reportedly told them to shift from heroin to ATS. Nevertheless, Chinese companies sell huge quantities of precursors to manufacture ATS to the Wa with official acquiescence. In September 2018, China asked the UWSA to crack-down on Christians in Shan State to pressure missionaries who might spread Christianity in Yunnan. Consequently, The Wa arrested pastors, teachers, and missionaries and closed many churches.

The Wa know that China will never support their full independence for many reasons, the most important perhaps being the PRC’s plan to use Myanmar’s ports in its Belt and Road Initiative. China also seeks to protect its commercial ventures, including oil and gas pipelines, and wants to staying on the good side of the government as well as the armed groups to protect its investments. Sources close to UWSA leadership claim that they would “welcome ties with non-Chinese actors.” Some experts suggest that the World Food Programme (which has worked in Wa areas since 2004), could serve as a possible neutral party. In the speech he delivered at the 30th anniversary celebration the UWSA chairman spoke of “opening up to the outside world” and growing a market economy.

While the UWSA is similar to Lebanese Hezbollah or the Columbian FARC with a large armed wings and involvement in criminal enterprise it is not pursuing an insurgency. The closest comparison may be Transnistria, which has Russia as a patron supporting an autonomous though largely unrecognized client-state. (Similarly, the US cooperates with the Kurdish proto-state in Syria).

The West may stand to gain in three areas by engaging with the UWSA: first, the Wa have expressed a willingness to exit the drug trade; a reduction in the supply of ATS would have a salutary impact on the region. Second, if the Wa do further develop mines for rare earth metals this may provide an additional source for Western manufacturers squeezed by China’s near monopoly on these critical elements. Finally, a realist approach suggest then that absent Western involvement in negotiations between the UWSA and the Burmese regime, China will continue to remain the only player in this region, which is one reason that China has sought to exclude other countries from participating in the peace-talks. Engagement with the Wa presents potential upsides with little downside risk, and for the above reasons it may be time for the West to bring the UWSA in from the cold.

Author: Christopher D. Booth has traveled along the Bengali/Burmese border from the Chittagong Hill Tracts to Teknaf, and visited Rohingya refugee camps. He served on active duty as a commissioned US Army Armor & Cavalry officer. He is a Distinguished Graduate of Command & Staff College – Marine Corps University; a graduate of Vanderbilt University Law School; and the College of William & Mary.