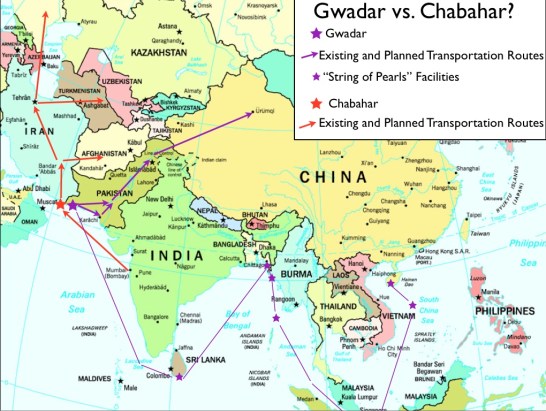 Iran’s recent proposal for Pakistan to join Chabahar Port may reflect its lack of trust on its counterpart “India.” India may stop the development of this project under the US pressure. Besides, the Indo-US strategic robust strategic partnership can put pressure on Iran because US-Iran relations are not cordial. In this context, Iran cannot rely only on India regarding long-run cooperation and it needs more strategic partners to avoid any monopoly of both India and the US on the Chabahar Port.

There are two factors which may reflect Iran’s aspirations behind its offer to Pakistan to join its Chabahar Port. First: Iran did this to sidestep any Indian domination with the help of America on the Chabahar Port to reach Central Asian energy reserves. Second: Iran may want to counterbalance Saudi Arabia’s inclination towards Pakistan. Iran wants to expand its market as it owns the world’s second-largest gas reserves.

The China-Pakistan strategic partnership is enhancing to counterbalance Indo-US growing influence in the South Asian region. Moreover, the development of Gwadar Port and the construction of China Pakistan Economic Corridor (CPEC) under China’s Belt and Road Initiative are the serious concerns for India and the US.

Up till now, India is silent over Iran’s offer to Pakistan. If Pakistan accepts this offer to enhance its bilateral ties with Iran, It is quite possible that India might exclude itself from the Chabahar project because India always alleges Pakistan for terrorism claiming that terror and trade cannot go together.

As far as Pakistan is concerned, it has handed over its Gwadar Port on a lease to China for its development. The port remained undeveloped since last several years because of Pakistan’s fragile economic condition. China is pursuing its strategic objectives through heavy investment mainly to enhance its trade with the Middle East, Africa, and Europe through the Gwadar Port. Therefore, Pakistan cannot afford any investment on any other project such as Chabahar Port. Simultaneously, there is no urgency for Pakistan to join Chabahar Port to reach to Central Asia (CA). It can access CA through linking Peshawar to Kabul which would connect Pakistan with Central Asian energy-rich states under its CPEC. However, Iran has also offered China to join or invest in Chabahar Port project. China has already immensely invested in Iran such as a Chinese state-owned investment firm provided a $10 billion credit line for Iranian banks, Iran’s central bank last year. It is a fact that Iran is important to China’s trade ambitions as it develops its trillion-dollar “Belt and Road” strategy aimed at boosting its ties to Europe and Africa.
Furthermore, China’s Export-Import Bank committed to a further $10 billion in loans, while the China Development Bank signed preliminary deals with Iran for $15 billion in infrastructure and production projects. Bilateral trade between Iran and China was just $31 billion in 2016, but it jumped more than 30 percent in the first six months of 2017. Since the lifting of sanctions on Iran, Beijing has opened two credit lines worth $4.2 billion to build high-speed railway lines linking Tehran with Mashhad and Isfahan; the Iran Daily reported, last year.

Hereafter, it is quite practicable for China to invest in Chabahar Port to fulfill its energy demands. On the other hand, China’s cordial friend “Pakistan” has more to do to secure its CPEC project. Pakistan may appreciate Iran’s bid to join Chabahar Port and demonstrate its willingness to join this after the successful completion of the China Pakistan Economic Corridor least till the completion of CPEC second phase by 2025. Simultaneously, Pakistan cannot carry out the responsibility to take part in the development of both ports (Chabahar and Gwadar). In this regard, India may make some reservation on Pakistan’s joining.

Moreover, Pakistan is being placed on the grey list of Financial Action Task Force for sponsoring terrorism. US military aid suspension of $2 billion to Pakistan is a New Year gift to Pakistan from the US at the beginning of 2018. It reflects that Pakistan is being isolated from the regional politics by the Trump Administration and India’s growing influence in the region. Therefore, Pakistan is seeking other strategic partners other than the US such as Russia and China but not at the cost of Pak-US relations. In this context, a heavy responsibility upon Pakistan is to sustain satisfying relations with its neighbors including Iran.

Pakistan-Saudi Arabia cordial relations and the Former’s troops in Saudi Arabia may be a current point of concern for Iran. Iran perceives that these troops will be used in Saudi-led coalition forces in Yemen against Houthi rebels (backed by Iran). Pakistan’s Chief of Army Staff responded to this reservation that Pakistan has sent its troops by training mission.

In a nutshell, the security and stability of Afghanistan have huge importance. No development project can successfully be completed unless Afghanistan remains unstable. The recent Afghan President Ashraf Ghani’s invitation to hold unconditional peace talks with the Taliban in February is applauded by many countries including Pakistan and the US. China also has put weight behind this. Almost all states have appreciated Ghani’s initiative pursuing their strategic interest and to complete their development project in the region. Initially, the Taliban did show cold response against these peace talks. One could be optimistic that Afghanistan’s security situation will be improved under political solution in the near future. All the developments are linked with stable Afghanistan.