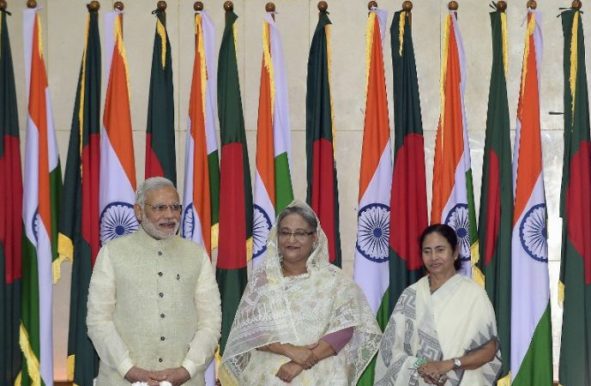 Addressing underdevelopment has been an issue of priority for Bangladesh. Despite being a smaller country in the South Asian landscape, it took the first step towards forging regional cooperation ahead and it was the former President of Bangladesh Ziaur Rahman who made the first concrete proposal for establishing a framework for regional cooperation in South Asia which culminated in the formation of South Asian Association for Regional Cooperation (SAARC) in 1985.

Witnessing the 18th Kathmandu SAARC Summit of 2015 failing to achieve the desired results of improving regional connectivity and strengthen the regional integration process being hostage to political disputes, Bangladesh expressed its desire to reactivate sub-regional groupings such as BBIN. BBIN initiative was formalized in 1997 between Bangladesh, Bhutan, India and Nepal with the objectives of forging cooperation on connectivity of power, transport and infrastructure and BCIM which seeks to establish an economic corridor between Bangladesh, China, India and Myanmar was part of Track I initiative for Bangladesh even while the largest South Asian country India kept it as a Track II initiative till 2013.

Bangladeshi endeavor to keep development as the primary agenda and keep the safe distance from the tag of India-Bangladesh or China-Bangladesh strategic partner has enabled Dhaka to balance its relations with New Delhi and Beijing. Bangladeshi Prime Minister Sheikh Hasina has recently inaugurated the construction work of the 130-kilometer-long Bangladesh-India Friendship Pipeline project through a video conference from Ganobhaban in Dhaka with India’s Prime Minister Modi joining the inauguration ceremony through the video link from New Delhi.

The pipeline will run from Siliguri to Parbatipur and would significantly reduce time and transportation costs by diminishing dependence on railways for bilateral trade. This would assuage Indian concerns over Bangladesh cozying up to China. India took improvements in Bangladeshi ties with China with a pinch of salt given its suspicions over Beijing’s strategic ambitions in the South Asia and Indo-Pacific region, for instance, in 2005 China overtook India as Bangladesh’s principal source of imports. Chinese offer of whopping US$24 billion loans to Bangladesh towards bilateral assistance for infrastructure projects during President Xi Jinping’s historic visit to Bangladesh in 2016 under Belt and Road Initiative (BRI) might have contributed to India’s lingering concerns.
Further, Bangladesh as per 2017 SIPRI report turned into the second-largest importer of Chinese arms in the world after Pakistan. Bangladeshi concerns as to India’s intentions remained that apart from occasional indulgence in rhetoric over the issue of Bangladeshi migrants, New Delhi’s balancing gesture towards Myanmar and Bangladesh preventing India from unambiguously supporting Bangladeshi plead for repatriating around 700,000 Rohingya refugees who fled Myanmar caused temporary irritants in Dhaka. New Delhi’s compulsion stemmed from the fact that it was developing Sittwe port in Myanmar’s Rakhine State and implementing the US$484m Kaladan transport project with the objective of connecting Rakhine State with India’s northeastern state of Mizoram.

Keeping aside the vexed political issues, Dhaka has sponsored “Bangladesh Bhavan” at Visva-Bharati University campus in Santiniketan near Kolkata, India and leadership of both countries have shown resolve to implement the Land Boundary Agreement successfully and started the Kolkata-Khulna AC Bandhan express although the Teesta water-sharing issue could not be resolved due to intransigence of West Bengal Chief Minister Mamata Banerjee. New Delhi realizes that Dhaka not only provides the strategic link between the mainland India and Northeastern states of the Indian Union given the fact that these states being land-locked it is through Bangladesh that they find quick outlet to the sea, but it is vital to deal with protracting security problems in some of India’s restive north-east states as well. More importantly, as the Chinese foray into South Asia and Indian Ocean region is extending its sway, improvement in Indo-Bangladesh ties would assuage India’s concerns of strategic encirclement by China.

After Bangladesh became independent with India’s assistance, its leadership concluded a friendship agreement with India which although opened up possibilities for strong bilateral ties, it was considered unequal and invited criticisms from dissenters within Bangladesh. The Indo-Bangladesh relations have traversed through several hitches but remained mostly stable. For instance, following India’s postponement of 2005 Summit for 8 months due to differences with the host Khaleda Zia government of Bangladesh, the former Indian Prime Minister Manmohan Singh proposed the idea of establishing the South Asian University (SAU) in Dhaka involving New Delhi’s principal contribution to its establishment and operating costs not only to demonstrate its commitment to SAARC but to forge the bilateral relations ahead. At times, mutual distrust has prevented beneficial mutual ties as well. For instance, the Bangladeshi government rejected a World Bank recommended the project to supply gas from Sylhet to New Delhi which was a beneficial project for both. While with Bangladesh, India has successfully forged close security ties in the forms of joint border patrols, a joint military, and naval exercises and by concluding agreements on fighting terrorism, organized crime and drug-trafficking, Beijing’s outreach to Dhaka are likely to have created brainstorming in New Delhi as to how to stem this tide. However, Dhaka’s preference for growth and development and its attempts at avoiding to be labeled either as an Indian or Chinese geopolitical ally would put Indian concerns at bay.