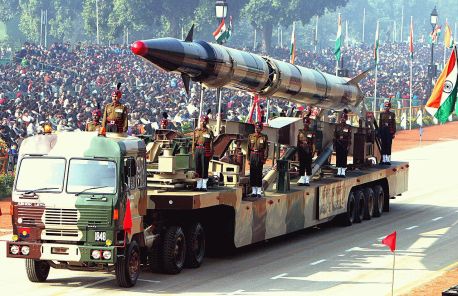 By Uzge A. Saleem

India and Pakistan are the two key players in South Asia, and the region’s stability largely depends on their bilateral relations. Tensions between the two are nothing new and have existed for decades. However with one state on its road to becoming a regional hegemon and the other trying to stop them in their tracks is not a good picture for the entire region. India claims that they face a threat from China in the north and any measures they take are to counter this menace. They have developed their nuclear weapons based this narrative. On the other hand, Pakistan gives a similar narrative claiming India’s nuclear program is a threat to Pakistan, and the development of our nuclear weapons is just a preventive measure. Both the states are primarily dealing with security dilemma.

On March 31st, 2016, India tested their K-4 nuclear ballistic missile from INS Arihant. This test marked the completion of India’s nuclear triad and acquisition of second strike capability. The reason why Pakistan is now forced to take counter protective measures is that we cannot let the conventional asymmetry become a nuclear asymmetry as well. With the issue of Pakistan’s strategic depth and India’s robust cold start doctrine, we can just not allow the Indians to dominate the Indian Ocean as well.

The fact that India has a desire to become the regional hegemon is not hidden from anyone. Their recent activities, including the US-Indo nuclear deal, K-15 and now the K-4 testing is a show of power and strategy. The alarming thing is that not only is this threat to Pakistan but it is also a threat to the strategic instability of the entire region. Pakistan’s foreign office spokesperson, Nafees Zakaria, gave a statement saying that the K-4 testing is a serious development which will impact the delicate strategic balance in the region. Pakistan will not sit idle and welcome this test with open arms. Counter measures will be taken from this side as well. The arms race between India and Pakistan will take a never ending turn. History is proof of the fact that whenever two nations have indulged in an arms race only bad things have happened and everyone has suffered. A nuclear crisis between India and Pakistan will not only threaten the safety and security of these two nations but also that of Afghanistan, Bangladesh, and Nepal as well.
The international community claims that Pakistan is developing its nuclear assets at a relatively rapid pace which might disturb the regional stability. What they need to understand is that the steps for instance taken by Pakistan are a counter action to India’s aggressive nuclear development. Now with such sea based advancements coming from India, Pakistan is bound to take further preventive measures. As Pakistan has been bringing to attention, there are speculations of Indians using civil purpose nuclear material for military uses. The international community needs to observe and question India’s developments as well.

Furthermore, in the hope of deterring Pakistan, India has taken extreme measures. They have threatened the peace of the entire region just to satisfy their desire a nuclear triad. Pakistan has so far willingly steered clear of the option of nuclearizing the Indian Ocean in attempts to ensure peace of the region and to not indulge in an arms race. Indians would like to believe that they have the upper hand on Pakistan now after this test just like they believed they had developed a master plan and named it Cold Start. However, they should be very clear about the fact that Pakistan had a plan to counter that and will also come up with a strong counter measure for this as well.

If we are to study the dimensions of deterrence post K-4 testing, there can be several ways to look at it. We can believe that India has K-4 and we have nuclear first use policy. This way Pakistan will not attack India because of their nuclear submarine and India will refrain from doing so because of the threat of an active nuclear retaliation. If this is to be believed, then it is safe to say that the South Asian region has reached a position of stable deterrence. However, this might not be entirely achievable. It is true that these two factors are essential in deterring both the nations but Pakistan will not leave itself vulnerable to India by not pursuing its own assured second strike capability, and the situation will be back to square one where both states are on an equal standing. This position can be considered equally vulnerable or equally secure, depending on the lens one sees it through.
To sum it up it would be safe to say that the level of trust between the two states is nonexistent due to historical reasons. Therefore, it is not rational for Pakistan to sit back in the hope that India will be deterred based on our nuclear first use policy and substantial nuclear arsenals. A step from Pakistan is expected and given the situation; it seems like the right thing to do. However, if India is willing to roll back on their nuclearization of the Indian Ocean, then Pakistan might also not want to go ahead with it. This can be done keeping in mind the greater benefit of the region and its stability. However, this may be unlikely since India considers the testing as a great achievement. In this case, Pakistan is left with no other choice but to take necessary steps for its national security.