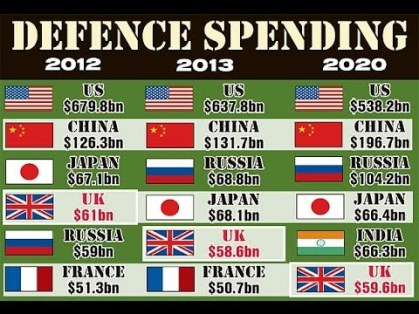 India’s economy is eight times larger than that of Pakistan. A 2015 Credit Suisse report ranked India as the world’s fifth largest military power. More, according to a report by Stockholm International Peace Research Institute (Sipri), India remained the biggest arms importer during the period 2011-2015, accounting for 14% of the World’s arms imports. All these facts coupled with India’s growing belligerence towards Pakistan necessitate a credible response and efforts to maintain the fragile strategic stability in South Asia.

While India associates its military modernization with threats that India perceives from China’s growing military and economic clout in the region and beyond, yet India’s force posture and its military doctrines are Pakistan-centric. For instance, India’s notorious Cold Start Doctrine (CSD) seeks to engage Pakistan in limited war below the nuclear threshold. Moreover, the latest Joint Armed Forces Doctrine (JAFD) is ominous as it envisions and formalizes the strategy of surgical strikes against alleged targets inside Pakistani territory. Such warmongering strategies espoused by India undermine the fragile strategic stability of South Asia and pose serious security threats to sovereignty and territorial integrity of Pakistan.

Thus, India’s growing ambitions and hegemonic designs have the potential to force its neighboring countries, particularly Pakistan to engage in a costly and dangerous arms race. But so far Pakistan has maintained unilaterally restrained policy and expects the same from other neighboring countries including India. It has been a cardinal feature of Pakistan’s foreign policy towards India that all unresolved issue including Kashmir should be resolved through negotiations and dialogue. But such a prospect seems bleak in the prevailing environment where India seeks international isolation of Pakistan and carries out subversive activities inside Pakistan through its proxies. Also, international apathy towards Indian human rights violations and frequent ceasefire violations has given India free hand in pursuing its disastrous objectives of regional hegemony at the cost of peace and stability.

Unfortunately, this leaves Pakistan with the only option of making its deterrent capabilities more credible and robust to make it costly for India to engage in a war. It is in this backdrop that Pakistan response towards India needs to be evaluated and recognized. Unlike India, Pakistan’s relatively small economy does not allow it to engage in a tit for tat response vis-a-vis India, and hence it opts for cost-effective strategies which serve the purpose of its security without incurring unaffordable damage to the economy.

The strategic competition between India and Pakistan is evolving with India’s exceeding conventional capabilities compelling Pakistan to rely on nuclear capabilities to manage the conventional asymmetry between them. Thus, Pakistan adopted ‘Credible Minimum Full Spectrum Deterrence’ capability in September 2013. This defensive posture aims at countering and neutralizing threats emanating from India.

India’s rapid arm-race has profound implications for regional and International security. It can severely harm the Asian balance of power. This situation can be improved regarding stability and balance of power when India refrains from overspending in defense and instead engage in a mutually beneficial course of action. In this regard, an arms control agreement between India and Pakistan is need of the hour. Until such an eventuality Pakistan should rely on ‘Full Spectrum Deterrence’ to avert any unwanted adventurous from India.

Moreover, since both states have crippling human security related issues like abject poverty and illiteracy, it makes, even more, a sense that the leadership in both countries think about improving the quality of life of their respective nations instead of resorting to war-hysteria and warmongering.