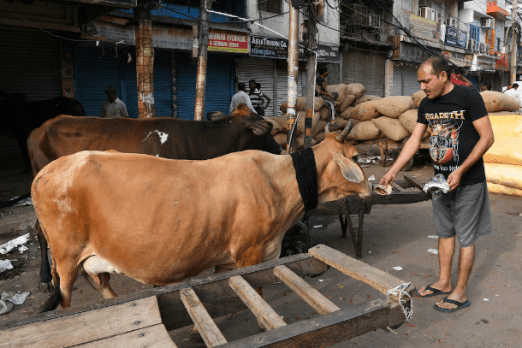 An Indian man feeds a cow with bread in New Delhi on May 15. As the cow remains a revered animal for millions of Hindus, a ban on cow slaughter and the beef trade exists in most states. (Photo by Prakash Singh/AFP)

A pall of gloom dominates the two-story house. A few half-naked children play outside its gate and watch every passerby with a questioning gaze.

The house belonged to Mohammad Qasim, a 45-year-old Muslim cattle trader who was beaten to death by a mob of Hindu fanatics on June 18 in Bajera Khurd village in Hapur district of India’s Uttar Pradesh state.

Self-appointed cow vigilantes who roam Indian villages to protect Hindus’ holy cows attacked Qasim after rumors that he was smuggling beef in his vehicle.

A month later on July 21, another mob beat to death 28-year-old Muslim man Rakbar Khan after alleging he was smuggling cows for slaughter.

Inside Qasim’s house, his younger brother Mohammad Saleem sits quietly, deep in thought amid the trauma of his brother’s brutal death. With a sigh, he says Indian Muslims are not safe anymore in the country.

As lynchings continue unabated with no effective steps to check such violence, ordinary Muslims like Saleem and their leaders say a sense of insecurity and fear has gripped their people across India.

On a normal working day, Qasim left home in his lorry for work. His vehicle was stopped by suspected cow vigilantes who assaulted him for over an hour, piercing screwdrivers into his body and attacking his head and hands with sickles.

He was accused of transporting cows for slaughter. However, police have not found any such evidence.

“Tell me what his fault was. Why was he killed so mercilessly and why didn’t those beating and abusing him even provide him with water when he was breathing his last breath?” asks Saleem.

He says Qasim’s death has left the entire area shattered and fearful. “We don’t know when the mob will come, kill us mercilessly and rape our women. The fear is only rising with each passing day,” he says.

According to a report compiled by data portal India Spend (Link), Muslims were the target of 51 percent of violence centered on cow protection issues from 2010 to 2017. Muslims comprised 84 percent of 25 Indians killed in 60 incidents.

About 97 percent of these attacks happened after Prime Minister Narendra Modi came to power in 2014 with his pro-Hindu Bharatiya Janata Party (BJP).

Since the cow remains a revered animal for millions of Hindus, a ban on cow slaughter and the beef trade exists in most Indian states. Hindu nationalists use these laws to justify their attacks on Muslims in public.

Research conducted in June by a leading think tank, the India-Centre for the Study of Developing Societies, stated that more than 47 percent of Muslims across the country said they feared being falsely accused of terrorist activities.

A United States 2017 report released in April points out that attacks against Muslims and Dalits have grown sharply in India under BJP rule. Titled the “Constitutional and Legal Challenges Faced by Religious Minorities in India” and sponsored by the U.S. Commission on International Religious Freedom, the report says religious minority communities and Dalits face discrimination and persecution in India where hate crimes, social boycotts and forced conversion have escalated dramatically since 2014.

Vakil Ahmad recalls how his father Ghulam Ahmad was attacked and killed by a group from the Hindu Yuva Vahini (HYV) youth militia on May 2 in Uttar Pradesh’s Aligarh district.

“He was guarding a mango orchard when he was attacked. They beat him in every possible way and he died after that,” says Vakil.

Discrimination and social rejection against Muslims in Uttar Pradesh and other BJP-ruled states are increasing. Even after Ghulam’s murder, those willing to support the family faced the wrath of Hindu groups. The family had to move out of the village.

“We don’t know why but we faced discrimination in the entire area and shopkeepers denied us essential commodities. We had to migrate and live far from our home,” says Vakil.

Mohammad Rayees, who lives in the Kutha area of Jammu and Kashmir state, says fear among Muslims has never been so high as it is today.

“At any time, a group of Hindus can attack anyone by labeling us as cow killers, beef eaters or terrorists. The reality is that we have now stopped eating even lamb meat as we don’t know when our house would get raided and attacked, and we would get lynched for nothing,” says Rayees.

Media reports show that BJP leaders and the government continue to support those lynching Muslims in cow-related incidents.

It’s a worrying trend, says journalist-author Rana Ayyub, who notes that a week after Qasim was beaten to death, Jayant Sinha, a prominent member of the federal cabinet, honored eight convicts accused of lynching and killing a Muslim man.

“This is not an isolated incident. In 2015, soon after the conservative BJP came to power, a legislator from the party honored the body of someone accused of a similar assault with the national flag,” says Ayyub.

Mustasin Ahmad, a lawyer in New Delhi, says Muslims are becoming more afraid after seeing the inaction of the government against their attackers.

In the past four years, only one case has led to a conviction for lynching. “Other cases are gathering dust as these are termed mob attacks in which it is hard to convict anyone,” Ahmad says.

He says administrative apathy to punish the criminals is seen as the state’s tacit approval to unleash violence against religious minorities such as Christians and Muslims.