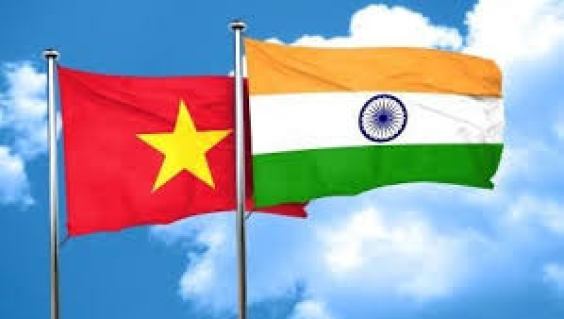 As is quite visible that most of the states in the Indo-Pacific region viz Vietnam, Australia, Japan, South Korea, and others are working closely with India on social, economic, and security fronts. Among prominent ASEAN and RCEP states, India-Vietnam cooperation has recently witnessed a landmark upswing. This is with a view to lay new thrust on the comprehensive regional partnership including social, economic, and security cooperation against the backdrop of the persisting disturbed and insecure scenario manifesting China’s ongoing military misadventures in the Indo-Pacific region particularly around the South China Sea and also against Japan in the Far East, besides Taiwan, Hong Kong, and Tibet, etc.. This is why both sides also discussed about the emerging threats due to China’s mounting imperialist aggressions and assertions in their own neighbourhoods respectively and also over themselves too.

As the prominent emerging powers in the Indo-Pacific region, both India and Vietnam, “reviewed the recent developments in India-Vietnam Comprehensive Strategic Partnership” and also discussed the future course of their diversified engagements in the recently concluded 17th meeting of the India-Vietnam Joint Commission on 25th August 2020. The meeting, held through video-conferencing, was ‘co-chaired by the External Affairs Minister of India, S Jaishankar and the Deputy Prime Minister and Foreign Minister of Vietnam, Mr. Pham Binh Minh. They discussed on different issues of mutual interest in the meeting, as diverse as socio-economic to defence cooperation including civil nuclear energy, space, marine sciences, and emerging technologies.’ Further, both the partners reviewed the current status of the India-Vietnam Comprehensive Strategic Partnership and reiterated their resolve to step up their defence and economic cooperation in the right earnest. While underscoring the defence requirements of Vietnam, India had “earlier extended ‘to Vietnam a credit of $100 million for purchasing 12 high-speed patrol boats which are being developed by the Larsen & Toubro (L&T), a reputed private sector company in the country. Further, India has also extended another $500 million as a credit to Vietnam for procuring its defence requirements from New Delhi.” Also, Vietnam has shown its preference for India’s surface-to-air systems Akash and the advanced light helicopters, Dhruv for strengthening its security.

Both the countries stressed the need for further strengthening their strategic partnership as regards “India’s Indo-Pacific Oceans Initiative (IPOI) and the ASEAN’s Outlook on Indo-Pacific. This is why both New Delhi and Hanoi agreed to carry forward their bilateral cooperation in line with India’s Indo-Pacific Oceans Initiative (IPOI) and the ASEAN’s outlook on Indo-Pacific to achieve shared concerns of security, prosperity, and growth for all” in the region against the backdrop of the eastward shifting global geopolitics in the world. In fact, “the IPOI (Indo-Pacific Oceans Initiative) is an initiative launched by Prime Minister Narendra Modi at the East Asia Summit in Thailand in November 2019. The initiative is focused on “seven pillars comprising of maritime security; maritime ecology; maritime resources; capacity building and resource sharing; disaster risk reduction and management; science, technology, and academic cooperation; and trade connectivity and maritime transport.” India has invited Vietnam to share its partnership with New Delhi upon one of the seven pillars of the IPOI. While the Indian side underlined Prime Minister Narendra Modi’s vision of Atmanirbhar Bharat for enhancing resilience through self-reliance and human-centric globalisation as the basis for India’s economic revival, the Vietnamese on their part consented to uphold the vision in the larger interest of the region and beyond by taking advantage of India’s expanding new economic capacities and demands. Apart from the above, India reaffirmed to extend “its development and capacity assistance for Vietnam through quick impact projects (QIP), Indian Technical and Economic Cooperation (ITEC) and e-ITEC initiatives, Ph.D. fellowships and proposals in the area of water resource management in Vietnam’s Mekong Delta region, Sustainable Development Goals (SDGs), and digital connectivity. As many as 12 QIPs for implementation in Vietnam have been approved by the Government of India, including seven QIPs in water resource management in Vietnam’s Mekong Delta Region and five QIPs related to developing the educational infrastructure therein.” With this view in hand an MoU for “Cooperation between Sushma Swaraj Institute of Foreign Service (SSIFS), New Delhi and Diplomatic Academy of Vietnam, Hanoi” and “MoU between National Maritime Foundation, New Delhi and Scientific Research Institute of Sea and Islands, Hanoi” was also signed in the Joint Commission Meeting. Indeed, Vietnam wishes that India must expand its presence in oil and gas exploration in the South China Sea because those areas lie within Vietnam’s economic zone and India has acceded to these Vietnamese expectations to carry on oil and gas exploration in Vietnamese waters. A recent “virtual meeting of the Vietnam Trade Office in India and the Associated Chambers of Commerce and Industry of India (ASSOCHAM) identified several additional areas for cooperation between India and Vietnam.”

The meeting was highly relevant given the global spread of the Corona pandemic causing worldwide economic recession and accompanying socio-political unrest in many countries like China, America, Brazil, etc., wherein both sides shared their views on regional and international issues of common interests and also that of their mutual benefits and concerns. Hence India has also worked to create an “economic pillar or development dimension of the Quad with a view to consolidating the Corona pandemic related cooperation and further extending it to cover the crucial areas viz trade, technology and digitisation as well as connectivity and financing for new development projects. The newest development relates to crafting a trilateral Supply Chain Resilience Initiative, comprising India, Japan, and Australia.”

Again India sincerely complimented at “Vietnam’s positive and constructive leadership of ASEAN (the Association of Southeast Asian Nations) this year, especially at a time when the region is battling the severe consequences COVID-19 epidemic and that will be launched formally in the near future. Both sides also agreed to step up cooperation and coordination at important regional forums under the ASEAN framework apart from expressing its full support to Vietnam’s chairmanship of ASEAN this year. Fortunately, both India and Vietnam do hold similar views on many of the international and regional issues. And they consented to coordinate closely at multilateral forums, including at the UN Security Council, where both the states will serve concurrently as non-permanent members in 2021.

In this so-obtained scenario, both India and Vietnam agreed to lay fresh impetus to their evolving comprehensive relations and also decided to explore closer cooperation in all emerging areas of common interests and concerns, as mentioned above. Fortunately, to further enhance their joint cooperation both India and Vietnam continue to maintain their close strategic partnerships by participating in frequent meetings between senior officers of both sides. Further, the two counties evinced satisfaction over the results of the joint meeting with their fresh resolve to speed up the momentum of their so-consolidating relationship. As evident the India-Vietnam shared vision in the Indo-Pacific, is reflected in their consolidating bilateral cooperation, may prove to be historic in many respects; particularly with respect to the economic progress and prosperity and also the strengthening of their individual as well as joint defence preparedness against the rising insecure and volatile scenario in the region against the backdrop of   China’s mounting transgressions in the region. This may happen as nothing is beyond human endeavour.