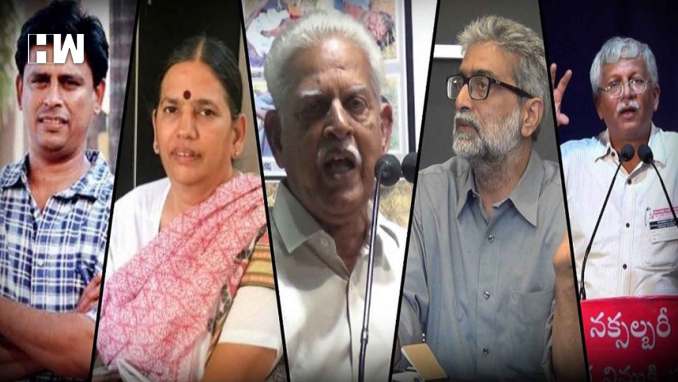 N Sathiya Moorthy goes back in time to dig up three cases that may not have any citation in legal text-books or lawyers’ ready-reckoners quoted before courts but which may still have a bearing on the current case against the arrested activists.

Independent of the final outcome of the ongoing Supreme Court case pertaining to the five activists arrested by the Pune police, in the interim, at the very least, there is a need to understand three precedents that may get referenced during the proceedings.

This is only the early stages of the procedural issues involved in the arrest of the five academics and cultural activists, for their purported role in the ‘Elgar Parishad’ rally in the Maharashtra city, which turned violent on January 1.

Should the apex court still find substance in the Pune police’s submissions that they had prima facie evidence against the arrested, then they may clear full-fledged investigations, maybe after ensuring that the Fundamental Rights of those five citizens in terms of ‘right to liberty and equality’ are not violated during the course of the investigations and their remand / incarceration.

If such investigations became justifiable in the eyes of the law, the court may then apply the ‘reasonable restrictions’ clause under Article 14 of the Constitution (‘Equality before law and equal protection of the law’), for the investigators to proceed with their job with certain freedom as different from outright immunity.

The first of the three cases mentioned may not have any citation in any of the legal text-books or lawyers’ ready-reckoners authentically quoted before courts across the country. But it was also the most widely-covered of the three cases in the global media at the time.

A day after the Janata Party government at the Centre had former prime minister Indira Gandhi arrested (on October 3, 1977), a judicial magistrate in Delhi threw out the case after seeking and viewing the relevant entries in the ‘case diary’ of the Central Bureau of Investigation.

According to newspaper reports of the time, additional chief metropolitan magistrate R Dayal found no meaningful entry in the ‘case diary’, leading to the conclusion that no prima facie case had been made out at least as yet warranting Indira Gandhi’s arrest when it was effected.

While opinion in the Janata Party leadership/government was said to be divided at the time on arresting Indira Gandhi and ‘making a martyr’ out of her, the magistrate’s order meant that then Home Minister Charan Singh, his acolyte and Health Minister, Raj Narain, the ‘giant killer’ from the 1975 Allahabad high court verdict that unseated Mrs Gandhi as an MP, and Industry Minister George Fernandes had to eat humble pie.

The Janata government did not take forward the investigations, and no attempt was ever made afterwards to revive the case and re-arrest Indira Gandhi.

The second precedent, too, pertains to the ‘family’ — and so would the ‘third one’, flowing out of the latter in a way. The reference is to the Supreme Court verdict in the ‘Rajiv Gandhi assassination case’ and the ‘Vaiko detention case’, after the Marumalarchi Dravida Munnetra Kazhagm leader from Tamil Nadu openly argued the case of the Tamil Tigers in a public rally, years after the outfit had been banned in India.

In the ‘Rajiv Gandhi assassination case’ a three-judge bench of the Supreme Court, headed by Justice K T Thomas, held in 1999 that it was a ‘personal crime’, and not a ‘crime against the nation’ to warrant the application of the now-defunct TADA (Terrorism and Disruptive Activities) Act.  The bench also dismissed a ‘review petition’ filed by the CBI-SIT, the investigating agency in the case.

Having linked the assassination to the history of the Indo-Sri Lanka Accord, 1987, the CBI-SIT had failed to establish when exactly did the Tamil Tigers leadership hatch the conspiracy to do assassinate Rajiv Gandhi. The bench then reduced the number of death convict to four from the 26 as per the trial court verdict.

The case against MDMK leader Vaiko flowed from a case filed by the then government of Jayalalithaa, for a speech supporting the banned Tamil Tigers.

Vaiko had delivered the speech at a public rally, held in Thirumangalam in Madurai suburbs, months earlier, and his arrest at the Chennai airport, on arrival from a US trip, made national headlines.

Upholding the now-defunct Prevention of Terrorism Act, a division bench headed by Justice S Rajendra Babu held in December 2003 that a ‘mere act of support to a terrorist organisation’, the Tamil Tigers in this case, “does not amount to an ‘act of terror’ under the Act”. This in turn led to Vaiko being released from prison, and the state government dropping the case against him subsequently.

In the present arrested activists case, the Supreme Court, the Delhi and Bombay high courts, and also a subordinate court in Pune, are all involved, simultaneously.

The SC took suo motu notice of the case after the Delhi high court overturned the ‘transit warrant’ issued to the police to take one of the suspects, arrested in the national capital, to Pune for further investigations the same day.

The high court had held that the investigating agencies did not seem to have made out a case for the arrest, in the first place, and in a rare move, ordered his transfer to overnight ‘house arrest’.

With the other arrested persons either moving the respective high courts, or were expected to do so, Chief Justice Dipak Misra in the Supreme Court ordered the police release all those who had already been arrested, and hold them under ‘house arrest’ until the next hearing, posted for September 6.

In doing so, CJI Misra observed that “Dissent is the safety valve of democracy. If it is not allowed, the pressure cooker will burst”. However, all courts involved have held that they did not want to pre-judge the police in the matter, and have asked them to continue with their investigations, unabated.

This has led to a situation in which those arrested earlier in the case continue to be in prison. Their case is likely to be agitated before the superior courts.

The Bombay high court, on Monday, while reiterating that they cannot stop the investigators from doing their job, however pulled up the Maharashtra police for holding a news conference to claim that they had “conclusive proof” to link the activists arrested in June and last week to Maoists, when the matter was sub judice.