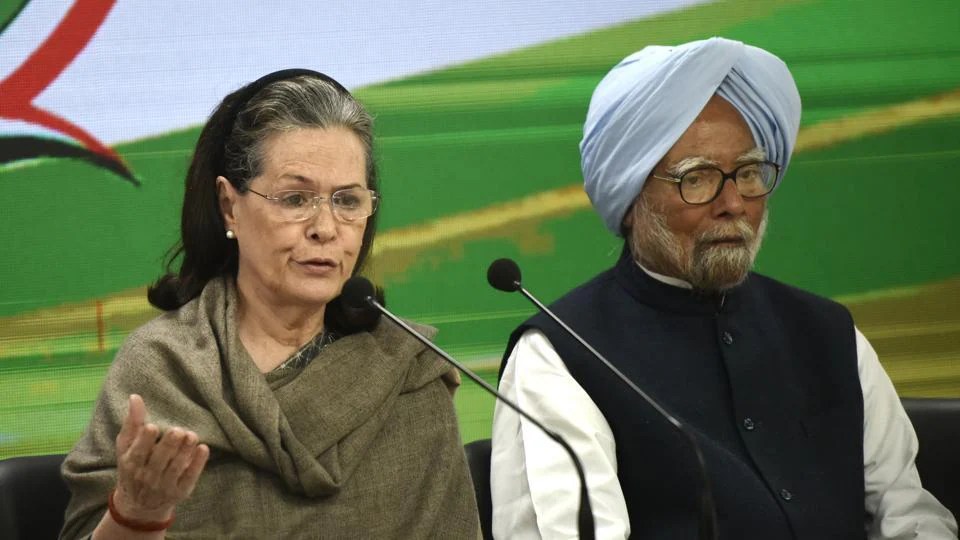 By the looks of it, the Congress cannot hope to return to power even in election 2024. What it can do is to start from the bottom, hold organisational elections, which are honest, and co-opt those elected to form teams of office-bearers at all levels, right up to the working committee. By the very nature of the elections that they are going to lose, the party should use the interim to shore up youth power, or whatever remains, says N Sathiya Moorthy.

The death of Ahmed Patel may have silenced internal critics within the Congress party for the present, the allotted news space taken over by the larger farmers’ protest at the gates to the capital.

But that is no comfort for the Congress party, in the short, medium and long terms. The problem is that the old guard in the party is blocking the way for younger elements, if any left, and thus for the party itself.

The good thing about the much-publicised internal criticism in the party may be too late, for doing too many chances ‘too soon’, but something is better than nothing for the ageing party. The party’s disconnect does not owe to the ‘dynastic’ leadership — which may possibly be the one connecting point just now for whoever stands by it even when all else has been lost.

Put it in a non-serious perspective, if you want, the Congress’s reversals owe to the voter. It is he who has moved away from the time and space when the party was more relevant. That was when voters too thought that they owed the nation’s freedom to the Congress party and Gandhiji, and the post-Independence progress to the ‘Nehruvian model’.

For those who do not know about it in the present generation, or have chosen to forget it, the Nehruvian model combined democratic socialism and State-centred capitalism, involving massive investments in industrialisation and irrigation.

It may require an impassionate assessment to see if the fiscal crisis of the time was caused exclusively by the Nehruvian model and/or the Nehru-Gandhi leadership, and if external factors were also not to blame.

Those that blame Sonia Gandhi’s leadership for the Congress party’s downturn over the past decade or so have only to clear their minds to recall how it was her leadership that won the 2004 Lok Sabha elections, ‘single-handedly’.

Conversely, did she commit a mistake by handing over the government leadership to a technocrat in Manmohan Singh, who lacked the ‘killer instinct’ of a politician that Sonia had to interfere from outside and had to be seen as ‘interfering’ for the BJP Opposition of the day and since to propagate. She could have after all made Manmohan Singh run the government as deputy prime minister L K Advani was doing for Prime Minister Vajpayee when he headed any number of groups of ministers (GoMs).

The job was given to Pranab Mukherjee under the Manmohan Singh dispensation, but he was not seen as completely trust-worthy, or he lacked the confidence that he was as trust-worthy as he was indispensable.

The other problem with the Congress was the unwillingness of Rahul Gandhi to take up ministerial responsibilities, in the only job in the country where only can learn only first-hand. Rahul Gandhi evaded responsibility, and retained all the rights. So, when he thought he was ready to take up responsibilities of the kind which alone some cohorts thought that a Nehru-Gandhi should fill, there is no such job to be had.

Sonia Gandhi’s 2004 victory owed to the failure of the ruling BJP’s ‘India Shines’ campaign. In this, governments lose power and the Opposition wins, and it is only the government that decides when it loses. As Indira Gandhi’s experience and that of Rajiv Gandhi and Vajpayee have shown, a disconnect with the voter alone makes governments and leaderships lose elections and power.

The irony of the Indian situation is such that no leadership, when it loses power, has learnt that there is a dis-connect with the voter and there is still time to repair the damage. When they learn it, they are already out of power. The greater irony of the Congress is that not one of its front-line leaders, now branded by the media as ‘rebels’, seem even to have understood this.

Ghulam Nabi Azad was right in saying that the Congress party lacked the organisation required for winning elections, sounding as if there were those unseen and unidentified others who alone are to blame. P Chidambaram has echoed similar views, but other ‘rebels’ have been more vocal about it. But not one of them has either come up with a suggestion for correctives,  nor has any of them talked about correctives.

The problem is that charity for the Congress has to begin at home. When the likes of Azad, Chidambaram, Anand Sharma, Veerappa Moily, et al, are blocking the way for the youth, where can the party grow? When was the last time any of them won an election on his or her own steam? How many of them can actually win a panchayat ward election, leave alone a Lok Sabha or a state assembly election as an independent, without the party tag earlier and a credible strong and reliable ally, since?

The Congress Working Committee has two Nehru-Gandhis in Rahul and Priyanka.  Sonia as the interim president add up to three in the party’s apex body. But take the rest. Either they are tired oldies, who have failed to inspire the cadres or voters in their own native constituencies, or youthful leaders who are placed their for personal loyalty and media exposure, again given by the party. Theirs too is not a berth won on their own credit, or in an election.

By the looks of it, the Congress cannot hope to return to power even in election 2024. What it can do is to start from the bottom, hold organisational elections, which are honest, and co-opt those elected to form teams of office-bearers at all levels, right up to the working committee. By the very nature of the elections that they are going to lose, the party should use the interim to shore up youth power, or whatever remains.

Independent of whatever may be assumed or said otherwise, the fact is that youth join political parties as primary members, also to climb up the organisational ladder. When they discover that the roads are always blocked, they move away to another political party, where their very ‘defection’ makes news (whatever may happen to them and their aspirations later). The more honourable among them simply retire.

The Congress got its moment twice in the past three decades. First when Sonia Gandhi took over as Congress president in the mid-nineties. Yes, the party was not in power until 2004, but she ensured some heft by letting state satraps, even if of her choice, to lead without impediment, and with the unwritten promise that if the party won the assembly elections, he or she would be the first choice for chief minister.

When the party won the LS polls in 2004, which none of their adversaries, nor the national media, not even most Congress leaders expected, that was a shot in the arm. Not only did Sonia Gandhi let down the voters and the party by not becoming the prime minister, she also let her reformist-approach to drift away. Suffice to point out that UPA I and II did not produce one great  new minister at the Centre. Nor did the party throw up any youthful organisational leader at any level across the country, during the period.

In this, the Congress is in the good company of the Narendra Modi government — which has not produced a single new ministerial candidate who can be made the BJP’s poster-boy of the future.

But on the organisational front and also the choice of MPs, the BJP has excelled. There are fewer sadhus and sanyasins now in the BJP’s parliamentary party than in the post-Ayodhya nineties. Those that are there now, their ochre or saffron wear does not cover their political ambitions enough. Yet, it stands, and stands still, there.