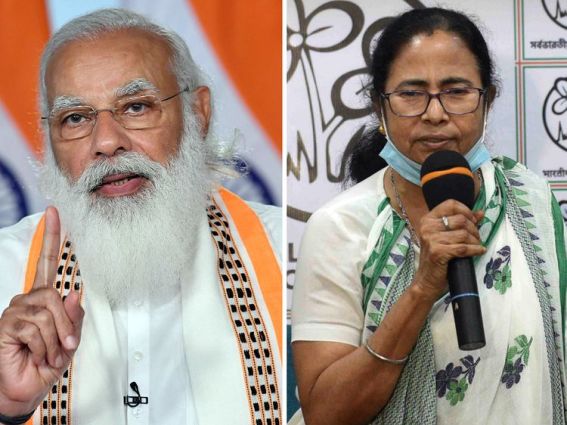 Prime Minister Narendra Modi has gone overboard in turning the political tide in his party, Bharatiya Janata Party (BJP)’s favor in ongoing assembly elections in West Bengal. During his campaign, he has tried using the Bengali language and has for months moved around, donning the image of the state’s Nobel Laureate, Rabindranath Tagore (1861-1941). Exuding confidence about his party’s success, he recently commented that BJP would win more than 200 seats.

Begun on March 27, elections for 294 seats are being held in eight phases in West Bengal. The last will be held on April 29, and the counting of votes is scheduled for May 2. The present Chief Minister Mamata Banerjee, Trinamool Congress Party leader (TCP), may return to power for the third term if her party wins more than 148 seats. During the preceding polls in 2016, TCP won 211 seats against three won by BJP. Before that, TCP won 184 seats and BJP – none.

Despite not having a stronghold in West Bengal, BJP is apparently over-confident that Modi-wave and the saffron brigade’s attempt to polarize the state’s political atmosphere along communal lines will help the party perform well.

Undeniably, BJP leaders and its saffron-brigade associates have been trying hard for several years to gain prominence in West Bengal. Electoral luck hasn’t favored BJP till now. During the 2019 parliamentary elections, while BJP succeeded in gaining a massive lead against its rivals, including regional parties, the case was different in West Bengal. Out of 42 seats from here, against 22 won by TMC, BJP got 18. Interestingly, while BJP won 16 more seats in 2019 than it had in 2014, TMC – 12 lesser, a higher percentage of popular votes favored Banerjee’s party. It is pertinent to point here that though BJP swept the 2019 elections, winning more than 300 seats in the 543-member Lower House (Lok Sabha) of the Indian Parliament won less than 40% votes.

A lot is dependent in West Bengal on whether voters view the present contest as primarily between TMC and BJP or whether other parties in the race, particularly Congress and the Left bloc, are also given some importance. Though Congress is contesting in alliance with the Left, it seems to have reached an understanding with TMC that it will not cut into its vote-bank.  Besides, Banerjee has called on BJP’s rivals to unite and focus on defeating this party. She has written to 15 opposition leaders to unite against BJP in the interest of defending Indian democracy.

Irrespective of whatever claims be of BJP leaders, in all probability, they are not oblivious of the fact that it is as yet too early to gain a lead against TMC in West Bengal. The hold of the saffron brigade is not as strong in states outside the Hindi belt as it is in states like Uttar Pradesh and Bihar, which fall within the Hindi belt.

Besides, Banerjee, the key politician in this political battle, is far more shrewd than BJP leaders envisage. Though she has taken the services of political strategist Prashant Kishor, she is not totally dependent on his team. This is reflected by her not backtracking her campaign drive even though she has been compelled to use a wheelchair following an injury. The importance accorded by her to Bengali-politicking takes the lead against attempts made by Modi to try and appear like a “Bengali.” Voters are sharp enough to differentiate between who is a Bengali and who is not. West Bengal is in Eastern India, and Modi hails from Gujarat- a state in Western India. Banerjee has repeatedly asserted that only a Bengali will win in West Bengal. Banerjee’s regional identity apparently overshadows communal polarization along religious and caste lines being attempted by the saffron brigade and its associates.

Notwithstanding the performance of BJP in Lok Sabha elections, during assembly elections, voters tend to give greater importance to their regional leaders and parties. Banerjee takes the lead against local leaders of BJP, Congress, and the Left bloc. The success of BJP candidates is more likely to be dependent on the failure of contestants from Congress, the Left Bloc, and smaller parties and independent candidates against them. Against its record, even 50 seats would spell a breakthrough for BJP; and a political trauma for its rivals in this state.

Of course, prospects of results being manipulated by faulty Electronic Voting Machines (EVMs) cannot be ignored. Nonetheless, Indian democracy is being put to a strong test in West Bengal by the percentage of voters who decide to venture out and vote, unfazed by Covid-phase and political tension!