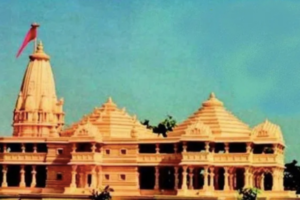 An architect’s rendering of the proposed Ram temple in Ayodhya town in Uttar Pradesh. Prime Minister Narendra Modi is scheduled to join a foundation stone-laying ceremony on Aug. 5. (Photo: opindia.com)

Indian Prime Minister Narendra Modi plans to visit a controversial temple site in a move that could boost his party’s idea of making India a Hindu-only nation.

Modi, known for his hardline politics, is expected to participate in the foundation stone-laying ceremony of the temple in northern India’s Ayodhya town, considered the birthplace of Hindu lord Ram.

A centuries-old dispute over a temple-mosque structure in Ayodhya was aggravated in 1992 when Hindu zealots demolished the structure. It triggered nationwide Hindu-Muslim riots, killing at least 2,000 people.

Modi’s pro-Hindu Bharatiya Janata Party (BJP) came to the political mainstream by demanding demolition of the 16th-century mosque built by Muslim ruler Babur. They claimed Muslims built the mosque after demolishing a temple and campaigned to destroy it and build a new Hindu temple at the site.

The temple construction was part of the BJP’s election promises but was delayed because of court cases over land ownership. In November 2019, India’s Supreme Court ruled in favour of a Ram temple.

The judges upheld Hindu petitioners’ claims to the ownership of the land of less than three acres. It also ordered the land to be owned by a trust overseen by the federal government.

Modi is all set to join the foundation stone-laying ceremony at 12.15pm on Aug. 5 to start the temple construction, according to senior Hindu priest Mahant Kamal Nayan Das of the Temple Trust.

“Timings for the foundation-laying ceremony for the prime minister have been decided according to the Hindu calendar and the most auspicious time,” he said.

On Aug. 5 last year, the Modi government abolished a clause in the Indian constitution, taking away the semi-autonomous status given to Jammu and Kashmir, India’s only Muslim-majority state, neighboring Pakistan.

The action was also part of the BJP’s poll pledges just like the temple in Ayodhya — the two top agendas of the BJP since its inception in 1980.

Hindu groups, led by their fountainhead Rashtriya Swayamsevak Sangh (RSS), have been making these demands since India’s independence after a bloody partition that led to the division of India as Hindu-majority India and Muslim-majority Pakistan.

Modi’s proposed visit to the stone-laying ceremony of the Ram temple has explicit political ramifications and is opposed by the Communist Party of India (CPI) and the Maharashtra-based Nationalist Congress Party (NCP).

Sharad Pawar, NCP chief and a former defense minister, triggered a row when he said that “the government needs to pay attention to the economy” in an effort to fight the coronavirus pandemic rather than temple construction. He said the Modi government needs to decide what needs to be given attention and importance.

Communist leader D. Raja opposed Modi’s plan on the ethics of governance. “Our constitution clarifies that the prime minister and the government should be neutral towards all religions. PM Modi’s visit to Ayodhya is an ill-advised move. He cannot identify himself with a particular religion,” Raja said.

The scheduled visit will be Modi’s first visit to the temple site in the six years after he assumed charge of governance on May 26, 2014.

However, Congress and other opposition parties have so far remained silent on the temple construction itself. They know that opposing the temple after a favorable judgment from the Supreme Court would be problematic.

The principal opposition Congress party — led by Italy-born Sonia Gandhi and her son Rahul Gandhi and daughter Priyanka Gandhi — has also been silent on the proposed construction of a Ram temple and Modi’s visit to the spot.

Congress is facing a dilemma after often being described as an “anti-Hindu party.” Hindu groups accuse it of projecting a secular image by largely depending on Hindu votes and appeasing Muslims.

Congress leaders deny this, but the party has suffered a drubbing in consecutive national polls in 2014 and 2019.

“We are not anti-Hindu. The BJP and their spin masters have tried to push a line, and they seem to have taken custody of Lord Ram. Frankly speaking, Ram belongs to the entire country and Indian civilization as a moral guide,” said Ilyas Quereshi, a Congress leader in Ahmedabad.

“The Indian economy is in the doldrums. The country is in a war with China over boundary disputes. The Covid-19 figures have jumped to over one million. More than 27,497 people are dead, but this government’s priorities are different.”

BJP leaders say that opposing the temple construction on the pretext of the economy and pandemic amounts to insulting Hindus.

Another BJP leader, Subramanian Swamy, has said that the battle against the coronavirus and temple construction should not be mixed.

“It is a ridiculous argument … you cannot compare two alternatives which are not equal. We can have both; we can fight Covid-19 as well as inaugurate the Ram temple,” he said.

But those who study Indian political history know that the BJP’s politics remain intertwined with the Ayodhya temple and its pro-Hindu ideology. “Today’s elections require two things: a popular face and emotive issues.

Ideologies may not matter much. The BJP has Narendra Modi, and pursuing temple politics actually attracts millions of Hindu voters,” Tushar Bhadra, a political observer based in Modi’s constituency of Varanasi, told UCA News.

“On the other hand, the Congress party and other opposition parties are stuck in the 1970s with no plans and issues at hand.”  Politically, Modi’s temple move should be seen as a long-term strategy for national elections due in 2024.

The views expressed in this article are those of the author and do not necessarily reflect the official editorial position of UCA News.