India Israel relations is at a watershed moment for pragmatism 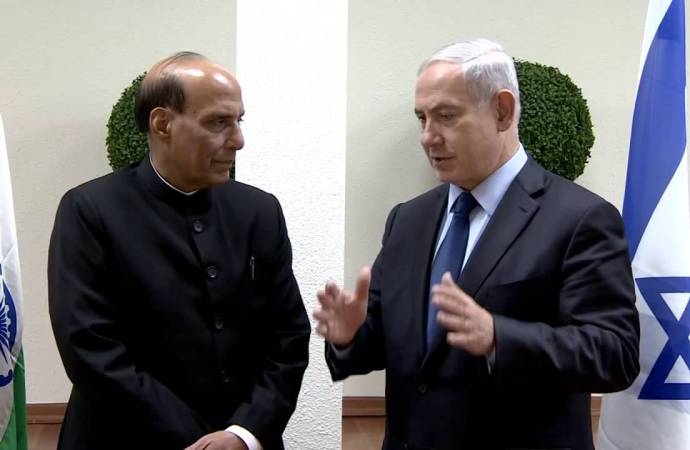 Since coming to office last year, Indian Prime Minister Narendra Modi’s charm offensive to rejuvenate Indian foreign policy, if nothing the perception of it, has taken him to overlooked lands such as Fiji, Seychelles and Mongolia. He will soon travel to Central Asia, the “-stans”. The spree has changed the premise of myriad foreign policy topics, pertaining to both economic and strategic fronts. Indo-Israel relations being one of such stand-alone entity. The Indian Foreign Minister Sushma Swaraj recently announced that Modi will be the first Indian Prime Minister to visit Israel, although she refrained from confirming the date-of-visit (speculated to be end of the year or early next year). This has sparked an array of commentary among enthusiastic policymakers and business community. However, the topic calls for further analysis due to its potential for economic gains for both countries.

Indo-Israel relations goes back to 1950 when India first recognized Israel. Israel has since laid down a “red carpet” for India to deepen the relationship. There has been several under-the-radar military exchanges since then, including in 1962, 1965, 1967 and 1971. Fast forward to 1992 when India opened diplomatic ties with Israel (parallel to India’s market-opening to the world), the two countries have steadily expanded their relations on a range of functional and technical areas ranging from intelligence to agriculture to investment and trade. The Indo-Israel trade has increased by ~100% in last 5 years, from $3.8 billion to nearly $7 billion, with a negligible imbalance. In recent years, Israel has also expanded its trade and defense exchanges with other Asian powers including China, Japan and even Muslim-majority Indonesia.

It is no secret that Narendra Modi has maintained personal relations with Israeli Prime Minister Benjamin Nethanyahu. Modi had visited Israel during his tenure as the Chief Minister of Gujarat. They also met in the US last year during the United Nations General Assembly session. They both have publicly congratulated each other on their respective election victories. And, their “Twitter diplomacy” (where Modi called Nethanyahu “my friend”) has given policy wonks good juggling materials. Netanyahu reciprocated the goodwill stating “the sky is the limit” for Indo-Israel relations. There has also been several high profile visits in recent times, including of India’s Internal Affairs Minister Rajnath Singh and of Israel’s Defense Minister Moshe Ya’alon. Optics aside, what are the real potentials in Indo-Israel relations? Most of it have underlying factors of technology-transfer and investment. The identified sectors have the out-growing potentials for the future.

Defense and Intelligence: India is Israel’s largest defense export destination. And Israel remains India’s one of the top, fifth, import source; which is expected to be among top three. In past decade India has brought $10 billion of defense equipment. Since Modi came to office, India has purchased $660 million of Israeli arms. The exchanges are expected to grow exponentially, as India modernizes its military.

Make In India: Israel’s Defense Minister Moshe Ya’alon has read Modi’s reform agenda and strategically pledged to invest in “Make In India” initiative in February. He did so in presence of an influential business delegation.  Although it will primarily be in the defense sector, other sectors including finance and IT will also get priority.

Agriculture: Israeli innovation in Indian agro goes long back. From drip-irrigation to horticulture to canopy management to water management. This sector will particularly benefit from Israeli expertise due to semi-arid lands in the western part of India, similar to that of Israel. Ten India-Israel centers of excellence in agriculture have been set-up so far, which is expected to grow to 30 by this year. Modi’s Gujarat had benefited from Israeli technology transfers in the sector.

Trade and Investment: New Delhi and Tel Aviv is currently negotiating a bilateral free trade agreement. As the data shows Indo-Israeli trade increased from $200 million in 1992 to about $7 billion currently. With a FTA, the trade numbers are set to double in just a few years, with exponential potential in following years.

Pharmaceuticals and medical: Collaborative research in biotechnology sector will be beneficial for both countries. India has a huge market for innovative pharma and medical products. And Israel has the R&D structure to catalyze that. India and Israel have already pledged $50 million to expand research in these areas.

Tourism: 40,000 Israelis (vast majority being youth after military service) visit India each year. And 41,000 Indians visited Israel last year, the largest number of tourists from an Asian country. These number will only grow. The potentials for this sector are huge. To begin with there could be spiritual tourism, such as popular “Yoga destinations” in India. India is surely an all-in-one destination in terms of scenic terrains. Indian tourists, spiritual or history-fascinated, can visit myriad sites in Israel including the Old City, the Dead Sea and various archaeological sites; all at cheaper rates than going to Western destinations.

The Indo-Israel warming up by no means should be in vacuum. Even with the narrowest lens, it should be a triangular project: India-Israel-America. America has long maintained special relations with Israel in terms of investment and technological exchanges. With Indo-American relations going into new fronts, investors and analysts in the US will be closely watching. They can provide essential expertise in enhancing the Indo-Israel relations. The successful Indian diaspora community in US and the Israel-watchers and investor in the US are a ready-made pool of facilitators. With the hunger for booms within all three economies, this could be the new source of trilateral powerhouse (just like US-Europe-Japan in the 20th century). All three are democracies and open-markets, to boot. Only time will tell how much this potential will be manifested.

The future of Indo-Israeli relations by no means will be a smooth-sail to unconditional ties. Despite the enthusiasm, especially among business communities, there are political relations vis-à-vis West Asia (alternatively known as Middle East) which India needs to shrewdly balance. The point for enthusiastic policy wonks and business leaders is not to turn a blind eye to these realities; but to show an alternative to the positive potentials of Indo-Israel relations. It is not, and should not be, a zero-sum game. Just like any other bilateral relations in today’s complex world. Israel-India relations seems to have gotten a breeze of fresh air. The potentials are real. It is now up to the policymakers and the business communities on both sides of the lawn to either accelerate the exchanges, or to keep them stagnant but steady like it has been up to today.