Over 60,000 homes of mostly low-income families were demolished across India by Union and state governments between January 2021 and March 2022, affecting over 3 lakh people.

Two decades ago, when six-year-old Reena returned to her basti (informal settlement) in Manglapuri, Delhi after attending school, she couldn’t find her home. Frantically, she searched around for half an hour until she found her mother. While she was away, her jhuggi (hutment) had been reduced to rubble by government authorities. Reena, who belongs to the erstwhile nomadic and historically neglected Gadia Lohar community, could not forget the trauma of suddenly losing her home, and life as she once knew.

Several years later, the situation in her basti remains unchanged. On September 20, 2022, government authorities again demolished houses in her settlement. When the children returned from school to not find their homes, they experienced a similar fear and insecurity and asked her, “Didi, yeh kya ho gaya? (What has happened here?)” Reena’s community continues to live with the constant fear of losing their homes, livelihoods, and hard-earned belongings.

Over 60,000 such homes of mostly low-income families were demolished across India by Union and state governments between January 2021 and March 2022, affecting over 3 lakh people, reveals a new report by Housing and Land Rights Network (HLRN), India. The demolitions were carried out citing many reasons, including under the guise of removing “encroachments” and for ostensible “environmental projects”. The new report, which is the fifth in the series on forced evictions in India, highlights that cumulatively, state authorities have evicted over 1 million people in the last five years. Despite such alarming numbers, demolitions in India have continued unabated at a frightening pace, as the attitude towards those living in poverty remains largely the same.

Whose ‘right’ to the city?

In 14.31% of documented cases of forced evictions in 2021, evictions were carried out to remove ‘illegal encroachments’. The widespread perception of the poor as freeloaders, land grabbers, and encroachers is deeply prevalent, even among government officials and is exhibited strongly during the demolition drives.

Every day, thousands of people move to Delhi and other metropolitan cities for work and to build a life. While it is the constitutional duty of the government to ensure that affordable housing options are accessible to everyone, inadequate urban planning, and excessive commercialisation of housing leaves a significant section of the population without a home. The most poor – who are unable to afford any existing housing options in the cities – construct small makeshift dwelling units in any unused vacant land they find. Over time, the residents build their community and take it upon themselves to incrementally improve their living conditions. Yet, with the strike of a bulldozer, the basti is demolished, and with it, the history, lives and struggles of its people. 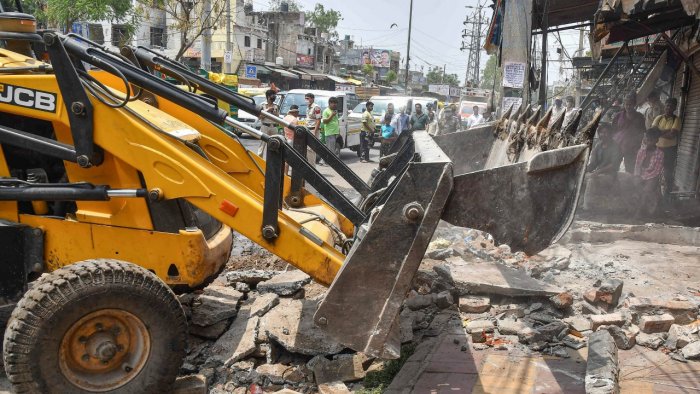 Representative image of a bulldozer during an ‘anti-encroachment’ drive. Photo: PTI

The aftermath of a demolition

In Gyaspur, Delhi, an entire settlement was demolished earlier this year in July, with the utmost haste and the use of vehement force. The demolition was carried out for a supposed afforestation drive and affected over 100 families living there. Most of the residents had migrated to the city decades ago for work or after marriage and had settled in the uninhabited floodplains of the Yamuna. Their lives converged around the livelihoods they found in the nearby areas; the women worked as domestic workers in the adjacent mohallas, and the children were admitted to the local schools. Most people had identity documents which proved they had been living in the area for over two decades. Yet, after only an oral warning by officials from Delhi Development Authority, bulldozers were brought in, multiple times over the next two months to demolish the entire settlement.

Evictions have dire consequences, including a severe impact on the physical and mental health of affected persons, and even loss of life in exceptional cases. When she first learned that her house would be demolished a day before her due date, Geeta – who was nine months pregnant – panicked and questioned where she would find refuge in her condition. Four-year-old Ramu cried the entire night the demolition took place in Gyaspur, surrounded by the remnants of his house. In his mind, the bulldozer is deeply etched as the symbol of destruction that disrupted the life of his family. Several children in the settlement also fell sick as the demolition was conducted during the intense heat of Delhi.

Internationally, forced evictions have been recognised as a clear violation of the human right to adequate housing, a principle accepted by the Indian judiciary in several prominent judgments. Evictions can be sanctioned only in exceptional circumstances, as a last resort, and with due process. In a statement issued during the pandemic, the United Nations Special Rapporteur on Adequate Housing reiterated, “Forced evictions constitute gross violations of human rights law in normal times, and during a pandemic may also constitute grave violations of humanitarian law.”

While the rest of the world has rushed to move on from the pandemic, low-income communities who rely on daily-wage work are still reeling from its economic consequences. The pandemic depleted their meagre savings, if any, and pushed them further into impoverishment. In a ‘post-COVID’ India, it is difficult for them to arrange even Rs 4,000 to 5,000 per month to rent a single room for their families. In all these cases, demolition of homes serves as the final blow to already struggling marginalised families as they are pushed into homelessness for generations.

Where do people go, when the state evicts?

In Manglapuri, after the demolitions in September 2022, the Gadia Lohar families are struggling to survive without shelter and no help from the state. “Bijli bhi kaat diya, sadak pe so rahe hain hum log. Chaar din se bacche school nahin gaye (They cut off our electricity, we are forced to sleep on the street. Our children have not gone to school since the last four days),” remarked a resident. The majority of evicted persons (59%) in 2021 did not receive any form of rehabilitation or compensation for the loss of their homes. In the absence of rehabilitation, affected families often continue to live at the same sites or nearby areas, worse off than they were before.

The Delhi Slum and JJ Rehabilitation and Resettlement Policy 2015 provides that no jhuggi in a ‘notified’ settlement will be removed without the allotment of alternate housing. However, recent interpretations of the policy by the Delhi high court have left a vast majority of settlements that have not yet been surveyed, outside its purview. Moreover, tussles between the Union and state government have stalled even the ongoing rehabilitation efforts. An order of the Delhi high court reveals that the houses earlier earmarked for allotment to low-income families affected by evictions, have now been appropriated for the Affordable Rental Housing Complex scheme for migrant workers. A woman hangs a blanket out to dry, at a slum in New Delhi, India January 2, 2020. Photo: Reuters/Danish Siddiqui

In the last few years, both the Union and state governments have promised in-situ rehabilitation of settlements in Delhi and have called for “Jahaan jhuggi wahin makaan”. However, the unabated and increasingly vehement demolition drives in the city reflect a different reality. Instead of ensuring access to adequate housing options, the state continues to deprive people of the most basic and essential protection afforded by housing. All due process requirements, such as consultation with the communities, adequate notice, and prior rehabilitation, are either set aside or circumvented, leaving people with no remedy.

Globally, many countries are calling for a complete moratorium on forced evictions for all reasons. But in India, such a measure seems like a pipedream. Even during the pandemic, when many Indian courts had ordered the government not to demolish, evictions continued relentlessly. A new drive, initiated in Delhi by the Lieutenant Governor, to remove ‘encroachments’ from footpaths has already threatened many roadside settlements and homeless persons. All across India, over 15 million people are estimated to be living under the threat of eviction.

A week after the demolition in Gyaspur, Pramila, a 77-year-old matriarch, sat in front of the rubble of her erstwhile home collating all her identity documents. “Unka toh kaam hi hai todna, woh todenge, lekin humaare paas kya bacha hai. Hum sab kuchh mehnat se banaye the aur aage bhi karte rahenge (Their job is to destroy, they will continue to do so, but we have nothing left. We had made everything with hard work and we will continue to do so),” she said. Her testimony reflects the reality of thousands like her who struggle to build a life each day but have resigned to the cycles of destruction brought by the bulldozer.