The media credibility offered to Mahant Paramhans Das, who has a history of making sensational but inevitably ineffectual threats against his own life, is curious.

An image tweeted by the UP CM’s official account, showing Adityanath helping Paramhans Das break fast over the demand of a Ram Temple.

New Delhi: On September 29, Jagadguru Paramhans Das of Tapasvi Chhawani in Ayodhya issued a widely covered statement saying that he was going to commit ‘jal samadhi’ – i.e take his own life by immersion in water –  unless the Union government declared India a ‘Hindu Nation’ by October 2. He also called for the termination of the citizenship of Muslim and Christian Indians.

Following this announcement, on October 2, Das was put under house arrest with forces deployed outside his ashram to maintain peace with the large crowd who had gathered there in support. Several of his followers had said that if Das committed jal samadhi, they would follow him.

In response to the house arrest, Paramhans put out a video stating that even if his original path to the Sarayu river, where he intended to commit jal samadhi was impeded, he would immerse his nose into a can of the water, which he displayed to the camera.

By 6 pm that day, he withdrew the threat, and issued a statement saying that unless the Union government declared a Hindu Rashtra, he would undertake a fast unto death with crores of people at the Ramlila Maidan in Delhi. But this time, he gave the government a more extended deadline – November 2023.

On September 21, he had put out a video calling for the murder of Christians and Muslims in a Facebook Live session, where he said:

Following his threats, BJP-affiliated politician and comedian Raju Srivastava also issued a statement of support urging him not to take the step, while saying that he understood and was in solidarity with his motives. “As a Hindu, my wish is that India becomes a Hindu Rashtra soon,” he said.

Among supporters present at the site on October 2 were Ragini Tiwari, who was placed at the Delhi riots, where she put out a live video saying, “Bahut hua sanatan par vaar, ab nahi sahenge vaar. Sanataniyo baahar aao. Maro ya maar daalo. Baad mein dekhi jayegi. Bahut hua. Ab jiska khoon na khaula, khoon nahi wo paani hai (Enough attacks on Hinduism. We won’t tolerate such attacks anymore. Hindus, come out. Die or kill. Rest shall be seen later. If your blood hasn’t boiled even now, it’s not blood but it is water).

The Quint also reported an eyewitness account of her firing a gun at people while shouting communal slogans. The Wire had interviewed journalist Farhan Yahiya who had shared a video of Tiwari pelting stones and instigating the mobs to charge at Muslims.

Tiwari also went viral in December 2020 for putting out a video where she threatened protesting farmers, saying that “Ragini Tiwari will once again create Jafrabad.” Jafrabad is where the February 2020 Delhi riots started, riots that the Delhi Police has blamed on those protesting against the Citizenship (Amendment) Act.

At the support group for Paramhans Das, sitting beside Ragini Tiwari was Anjali Varma, who was also present at the Delhi riots, where she had put out a live video on Facebook calling for civil war against Muslims. She was also found saying, “It now feels like the Hindu has woken up.”

“So I want people to come in large numbers in support of the CAA. We are sitting here to chase away Muslim women who are sitting in Jafrabad. We won’t leave till we have them removed,” she said.

Paramhans Das had himself held out the threat of violence against the protesters at Shaheen Bagh on February 2, 2020, saying, “These politics which are against the country, they should be stopped and the work of joining the nation and not breaking the nation should be done, or else I, Jagadguru Paramhans, make the vow that I will come with an army of 120 crore nationalists in support of the CAA and put them in their place.”

Not the first time

This is not the first time that Paramhans Das has threatened to kill himself unless his demands were met.

On October12, 2020, he went on an indefinite fast in Ayodhya with a similar demand for a Hindu Rashtra. The demands were different then in that he only wanted the citizenship of Muslims to be terminated (Christians were added to the demand this year), and he also demanded that all Muslims be deported to Pakistan and Bangladesh.

Earlier this year, in the run up to the West Bengal elections, he had announced a Rs 5 crore bounty for the beheading of Trinamool Congress leader Kalyan Banerjee. He also said that the leader should be hung to death for ‘derogatory’ comments against the Hindu faith. The TMC leader had come under fire for comparing the incident of the gang-rape and death of the Dalit teenager in Hathras to the Hindu deity Sita’s abduction in the Ramayana.

Following the TMC’s win in West Bengal and amidst reports of post-electoral violence, on May 8, Paramhans Das threatened to kill himself via self-immolation unless his demands were met. These demands included the imposition of president’s rule in West Bengal, and that the victims of the post-election violence in the state be given compensation and government jobs. He made this statement standing in a pyre, giving the government a deadline of May 25.

An earlier ‘hunger strike’ that Yogi Adityanath helped him end

Das had gone on hunger strike with the demand that a Ram temple be built at the then-disputed site at Ayodhya on October 1, 2018. He was allegedly hospitalised a week later, and on October 12, his fast was broken when Uttar Pradesh chief minister Adityanath offered him juice. Adityanath termed his demands as just and dignified, and said that they would be raised with Prime Minister Narendra Modi.

In September, he had spoken out against AIMIM president Asaddudin Owaisi when Owaisi had put out a banner where the district of Ayodhya (renamed in 2018) was referred to as Faizabad. He said, “Owaisi’s anti-Hindu move is also an insult to Chief Minister Yogi Adityanath. If posters bearing the name ‘Faizabad’ are not removed, Owaisi’s entry into Ayodhya district will be barred and the public meeting at Rudali will be disrupted.”

Attacking Muslims, Paramhans Das reiterated his demand that their citizenship should be terminated but added that if they wanted to stay in India, they should be kept as slaves. He was among the first to make public statements against Owaisi, following which the issue became a highly polarised media spectacle in which Owaisi was pitted against Adityanath. In an interview to Jansatta, Adityanath responded by saying, “Let Owaisi come to Ayodhya, he has his own thoughts and his own agenda. But he should understand this well – doomsday will never come. It is Ayodhya, it will be Ayodhya, and that will not change.” 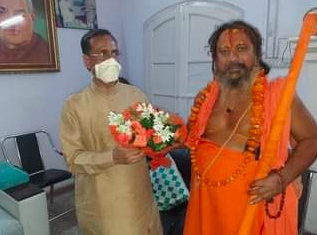 In August, he uploaded to his Facebook page a photograph of himself with the Uttar Pradesh Deputy Chief Minister Dinesh Sharma.

Earlier this year, in June, Paramhans Das also accused the Congress and Aam Aadmi Party of offering him Rs 100 crore to oppose the Ram Janmabhoomi Trust and the BJP.

The trust for the temple itself caused a brouhaha among the religious leaders within the area, with Paramhans Das causing waves when he made ‘objectionable statements’ against Ram Janmabhoomi Nyas chief Nritya Gopal Das, alleging that Das had threatened to kill him. At this time, he also advocated for the temple’s trust to be headed by RSS chief Mohan Bhagwat.

The media credibility offered to Mahant Paramhans Das, who has a history of making sensational but inevitably ineffectual threats against his own life, is curious. He’s a relatively unknown figure in Ayodhya, unlike the late Mahant Paramhans Ramchandra Das, who was a key figure in the Hindutva campaign against the Babri Masjid.

Das has not merely been covered by overtly right wing or pro-government channels, but has now made its way to news agencies like ANI (one of the first to put out his latest statement) which work to amplify his message to mainstream channels across the ideological aisle – while not actually having anything newsworthy to say.

Hate speech in and of itself should not be an item of news – which raises the question of why and how it gets normalised as bona fide ‘news’.

The largely un-contextualised and uncritical dissemination of this kind of hate-speech works to integrate what would be a fringe radical into the normalised mainstream. As with Yati Narsinghanand, these figures act as the connecting factor between the political right wing and the fundamentalist fringe radicals, giving hate speech the veneer of respectability through their proximity to the political class, and the political class the benefit of a communal rhetoric made to their electorate, stripped of the constraints of plausible deniability.

The article appeared in the Wire India