India Faces Tests From Its Neighbors

Despite a border cease-fire with Pakistan, India faces a growing set of challenges in its backyard. 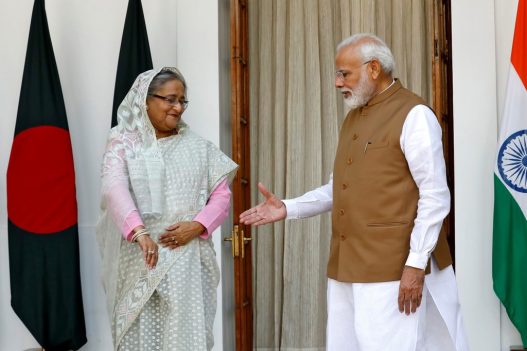 Welcome to Foreign Policy’s South Asia Brief. The highlights this week: India’s neighborhood challenges could undermine its influence, COVID-19 cases continue to rise in India and Pakistan, and Washington excludes Islamabad from a global climate summit.

If you would like to receive South Asia Brief in your inbox every Thursday, please sign up here.

For India, Pakistan has long posed the greatest challenge among its neighbors and with good reason: The two are bitter rivals and have fought multiple wars. But India now grapples with headaches across its neighborhood, from Myanmar to Nepal. Ironically, the recent border cease-fire with Pakistan means that New Delhi’s relations with Islamabad may not be its chief regional concern, at least for now.

India faces an immediate diplomatic dilemma in Myanmar, where the military junta has cracked down with deadly force against civilians protesting against the Feb. 1 coup. New Delhi has cooperated closely with Myanmar’s military in recent years on economic integration and on counterinsurgency along the border. In the long term, India’s engagement with the armed forces aims to build influence in Myanmar and crowd out China, its geopolitical rival.

If India condemns the Myanmar military’s actions, it could jeopardize these key interests. But by remaining quiet, it risks a major reputational blow. So far, New Delhi has largely chosen silence. The government declined to sign on to a March statement with other democracies against the violence, and its defense attaché in Naypyidaw attended an Armed Forces Day parade the same day. Officials in the border state of Manipur enforced an order to turn away refugees fleeing the violence in Myanmar before it was revoked a few days later.

New Delhi’s best bet is to leverage its ties with the Myanmar military and use quiet diplomacy to press it to reduce its violence—an outcome that public condemnations from the United States and others have so far failed to achieve.

In Afghanistan, events are moving in a troubling direction for India as the United States tries to reinvigorate the floundering peace process. If successful, it would result in a political settlement that gives a share of power to the Taliban—and by extension its patron, Pakistan. And if it fails, the war in Afghanistan would intensify, also strengthening the Taliban. New Delhi is currently a close partner of Kabul. The impending U.S. withdrawal will further destabilize Afghanistan, hampering India’s ability to project influence there through diplomacy and development assistance.

Elsewhere, a border crisis with Nepal last year has injected tension into a relationship once flush with goodwill. Pro-China political leadership in Sri Lanka is working to scale up its relations with Beijing: The countries’ presidents had a phone conversation this week, underscoring their desire to strengthen cooperation. And India’s relations with China are on ice following a deadly border clash last summer. (New Delhi’s decision to sign the border truce with Pakistan was likely motivated, in part, by a desire to free up more bandwidth to focus on the threat from China.)

None of this suggests that India’s relationships with its neighbors are a dumpster fire. There is no serious crisis with any major regional player except for China. Despite tensions, commercial ties with many neighbors remain sound. India is still Nepal’s top trade partner, and it is negotiating a new trade deal with Bangladesh. New Delhi’s vaccine diplomacy campaign has garnered effusive praise from recipient governments.

But the neighborhood troubles are nothing to sneeze at. They threaten to undermine the “neighborhood first” policy, one of Modi’s signature foreign-policy initiatives. The tensions have given Chinese and Pakistani rivals opportunities to increase their influence and diplomacy in India’s backyard. And by bogging it down, the nearby challenges distract New Delhi from its long-standing quest to play a greater role on the world stage.

Michael Kugelman is the writer of Foreign Policy’s weekly South Asia Brief. He is the Asia Program deputy director and senior associate for South Asia at the Wilson Center in Washington. Twitter: @michaelkugelman