In Bangladesh the politics of democracy is dysfunctional 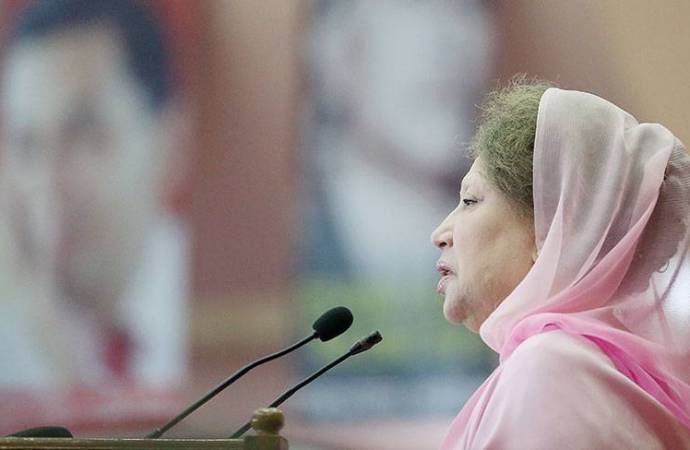 No doubt, it is a disturbing fact that the BNP is in dire crisis. Almost 28 months after the unnecessarily boycotted general elections — when it receded to its worst political performance ever — the then-grand centre-right-wing party is in a state of drift. It appears confused about its next steps, and certainly bereaved of ideas for its renaissance.

It has now come up with a new manifesto called Vision 2030 to turn the country into a “rainbow nation” — sounds like a political parody for many of the poor fish who have supported BNP for longer than its current leadership.

Owing to the despotism and kleptocracy of the current AL regime, the BNP now barely exists as a functional political organisation.

The intra-party order has disintegrated. Many of the mid and younger generation leaders, those who are trying to emerge as Messiah within the party, are either seen as opportunist offshoots of dynastic politics or considered as the ones with the ability to pay cash to sit in the upper echelon of the party. That’s what I often get to hear.

Many of the grassroots activists are feeling the heat of being humiliated and betrayed. Apparently, the current leadership has the motto “save what you can while you can because things will get a lot worse before they get any better.”

It is in disarray; a once-great party reduced to battling rabbles of conflicting internal groups skulking for whatever canny comforts they can gain from politics.

Good politics, good governance, and good government? Very nice. But maybe not in the near future.

The notion that Khaleda Zia (or her son Mr Tarique Rahman) could again form a government with a majority is now a discommoding fact for the party at large.

At least, not through an election under the regime that is in power. Even so, one can begin to marvel at the thoroughness with which its leadership has set it on a self-destruction mode.

In fact, this is a case for the AL too. The son, Tarique Rahman, who has immense influence over the party and its sympathisers, is losing momentum as he is in self-imposed exile in London, while his flag-bearers are raging in fury for being oppressed by the law enforcers. No one is there to take care of these oppressed kormis (affiliates)!

It is not that BNP has a lack of helpers, of course.

The recently selected organising members of the party (through council and then by the top-most leader), members of its international affairs committee, or hence the members of its standing committee are willing accomplices. But who could have predicted these would prove as sub-optimal selections?

These selections are pathetic enough to further derail the party. For instance, its members with responsibility to liaise with the international community are the compelling attestation of political incompetence, if not immaturity.

Seems like the international affairs committee members would often need lessons on the difference between sedition and national interest.

I can’t deny that we get to see a fresh episode of the tragicomedy with BNP as the protagonist, every day in the name of democracy. Nevertheless, who dares predict what happens next?

Nothing is too improbable to be realistic now. Matters have reached such a state, that leaders of the BNP feel that they are unable to campaign even in a by-election in which the party could have won with a majority, if it had demonstrated some degree of political maturity.

“Tacit alliance,” or “attempts to deny alliance,” or “be silent strategy” with Jamaat has only made things worse for the BNP. It is caught in a “Jamaat-extremist limbo” from which it has no easy exit anytime soon.

The only thing they hope to gain is the support of the Islamist and disfranchised voters at the moment, which may give them pro tempore comfort, but in the long run it will hit the nation (including them) hard.

Well, they may think that the ever-deteriorating law and order situation in Bangladesh is good for them, but this political hedonism won’t make them a favourite to their regional neighbours. History speaks.

While the BNP is surviving through some populist TV talk shows, which the government is sportively allowing in order to project its pledge for freedom of speech, and through loud speakers in the mosques — the ship is sinking, and no amount of unsinkable loyalty to the greater idea of democracy and religious harmony can change that. The question is whether the loyalists are consciously willing to sink with it.

The BNP’s insipid spokespersons on television or public debates may talk of introspection, security paranoia, and political auditing, but it sounds like nothing more than “whining and groaning.”

Despite its media presence, meagre though, the BNP no longer determines what the news agenda is nor has it been able to erase off its terrorism-extremism tattoo.

However, ceteris paribus, many will surely decide to abandon ship (as many have already in various cuts) and form alternative platforms. In fact, dignity and self-esteem leave them with nothing much to do.

Some of the senior leaders of the party may stick to the party, but they cannot change course until Tarique Rahman wishes to see a meaningful change.

Mr Rahman is who he has always been, and who he will always be. As the classic rules of politics would indicate, the more unpopular the government becomes the more Mr Rahman would rise as Mr Right.

But that too will not happen until he is back home and his so-called loyal clubbers and media trumpets are effectively replaced by leaders and workers suffering at the grassroots level. It is tough to think of precedents for this to happen.

What further disturbs the ordinary Bangladeshis is the political eccentricity of the BNP. It has been taken over by ducked intellectuals. Ducks undersell the party spirit, actually. A fringe party can accommodate eccentricity but the BNP is supposed to be a serious party of the kind that could plausibly form a government in the distant future.

It is by no means obvious that the BNP has no respect in the society, perhaps its acceptance has increased due to the AL’s indubitable failures in delivering credible elections and public safety. However, all boils down to the BNP’s leadership.

Given the growing anti-establishment sentiment among the aam janata (common people), it won’t be surprising to see even a banyan tree to win a free and fair election in Bangladesh.

But the question is — who would happily deliver a free and fair election? Neither the Chief Election Commissioner Mr Kazi Rakibuddin Ahmad’s office, nor the politics that AL-BNP practice would deliver it.

Hence, the critical mass of the populace will increasingly be looking forward to alternatives (but that surely won’t include Jamaat that acquired less than 5% vote in 2008 elections).

The recent visit of S Jaishankar, the Indian Foreign Secretary, along with the renewed rise of extremist fear and minority crush, will bring more terrible news for the BNP, as it has brought some to the AL too.

For the Indians and the Westerners, the ineffectiveness of the AL in taming extremism (both political and social) and the eclipse of the BNP as a compelling political entity would require readjusting to new socio-political realities in Dhaka.

It is evident that the foreigners won’t help the BNP come to power. In fact, the alleged BNP-Mossad tie has brought further hefty peril than promise for the party.

The sooner they realise, the better it would be for them to manage their own politics.

Otherwise, I will keep hearing more debate to the issue of BNP-Jamaat-mukto Bangladesh. The question this time will not be if this is going to happen, but when.

With that fear in my mind, I often ask my BNP friends (and AL friends too), loyalty is good, but what would you do when there won’t be anything left to be loyal to?  Things won’t get better anytime soon. There is no symptom that the AL regime will allow a better political space for democracy to thrive.

But that should not be an excuse to act like a heretic party which is, whether one likes it or not, the largest shadow opposition party.

For now, the BNP faces the biggest challenge in its 38-year history. Will the Zia dynasty ride out this whirlwind, as it has in the past? Or will the AL achieve its often loudly-stated objective of a “BNP-Jamaat-free Bangladesh”? The BNP needs to address these questions with sensibility and maturity.

Or else, oblivion awaits.

[This article is published with the consent of the author. It first appeared in Dhaka Tribune.]