Impact of Indian and Russian coziness over US and Indian defense relations: The case of S-400 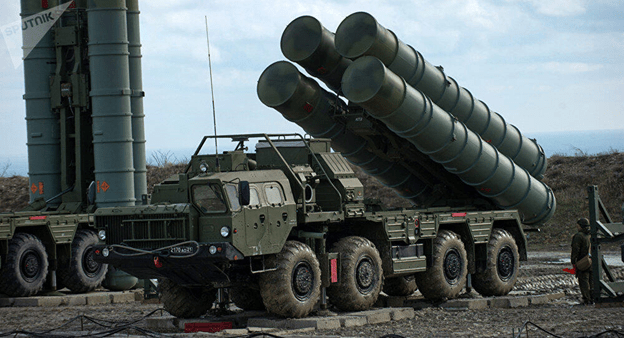 In a multipolar world, the significance of alliances to counter adversaries remains at the forefront of strategic planning. Alliances provide a comparative advantage and added strength against the adversary. Despite the commitment and value, the Indian government has given to its alliance with the United States, the procurement of Russian made S‑400 could strain the credibility of the alliance. The Indian government would not wish to vitiate the alliance with the US during these trying times especially under the current circumstances of intense standoffs and border skirmishes with China. Standing up to China without a stable alliance with the US could be taxing for New Delhi militarily as well as economically. Therefore, firm support of its strategic partner, the US, is vital; however, all of India’s efforts to secure this bond could go in vein with Russian air defense missile S‑400 operational on its territory.

Keeping in mind that over the past years the US and India have signed several defense trade pacts such as Logistics Exchange Memorandum of Agreement (LEMOA) 2016, Communications, Compatibility, and Security Agreement (COMCASA) 2018 and Industrial Security Agreement (ISA) 2019; coziness with Russia might cost India its newly formed defense relation with the US. These defense pacts have given India the benefit of securing sensitive communication and military hardware from the US and enhanced the defense trade between the two countries from non‑existent in 2008 to a sum of $20 billion by 2020. Moreover, the two countries have been engaged in military education and training, under International Military Education and Training (IMET) program, to establish a common understanding of long‑term mutual goals. Most recently in 2019, the US and India concluded several military exercises such as tri‑service exercise Tiger Triumph, US‑led Rim of the Pacific (RIMPAC) exercise, and Malabar exercise. Defense engagements with allies not only strengthen interstate relations but also help in projecting offensive posture to the adversary, and India is in dire need of continuation of such military engagements with the US to consolidate its position against China. While the US is inclined to establish these ties to secure safe grounds in Asia Pacific through Indian alliance, both the US and India have mutual national interests in the region, which is to counter China. Both the states, are therefore, expected to take calculated steps to hold on to their military alliance; however, procurement of S‑400 would certainly add complexities and reservations to their bilateral defense relations

On a multilateral level, India is a non‑NATO ally of the US and the import of Russian missile technology by India may subject it to removal from the non‑NATO ally status. This status is imperative for India as it has given India access to NATO military hardware and paved way for developing cooperative research and development projects. It was basically under the non‑NATO ally status that India was invited for strategic partnership; however, the partnership with US rival Russia could be a reason for India to lose some of the advantages of the strategic partnership with the US and eventually undermine its national security.

Given the persistent threat of increasing Chinese influence in the world, if US does not pursue for removal of India from non‑NATO ally status or downgrade the defense trade relations, it may coerce India through economic and financial pressure to disengage from the Russian defense industry. For the purpose, the US has devised specific sanctions under the Countering American’s Adversaries Through Sanctions Act (CAATSA) for states that advance partnerships with US adversaries through significant procurements. CAATSA could threaten Indian defense and trade relations with the US, as these sanctions can take any route between cutback on military engagements to visa restrictions. New Delhi believes that due to its special relations, Washington might wave off the sanctions, however, Washington has made it clear that there is no blanket waiver, or a country waiver when it comes to procurement of Russian defense technology under S‑400 and has added that there could be serious penalties for continuation of such procurements.

Therefore, India might not be an exception as there have been instances in past where US has pulled out of military trade deals as well as imposed sanctions on its close allies, such as when Turkey proceeded with its S‑400 deal in 2017, US and Turkey butted head repeatedly over the matter. When it comes to Turkey, it is a NATO member that is more privileged than India, with the mutual defense pact and collective defense under article 5 of NATO. Turkey‑US alliance is significant to counter Russian influence in the Middle East just as India‑US is to counter Chinese influence in Asia Pacific. Although the US did not impose CAATSA on Turkey for political reasons, it took a more punitive action by suspending Turkey from the F‑35 Joint Strike Fighter program and later even banning it from ordering F‑35s for the Turkish Air Force. Turkey neglected the initial signals beaconed by the US stances of its termination from F‑35s and believed that US would not dismiss this lucrative deal. The US is adamant not to have US defense technology along with Russian in any one state as it would expose US sensitive security information to Russians defense industry. For instance, in case F‑35s are exported to Turkey, Washington believes that it would disclose the special features of the aircraft such as its stealth, training patterns, and the weaknesses of F‑35s to the Russians.

Nevertheless, CAATSA was imposed on China’s Equipment Development Department (EDD) in 2018, during the trade war between the US and China, when it engaged in ‘significant transaction’ with Russian arms export of S‑400. Sanctions through arms embargo significantly threaten the targeted state’s military combat capabilities and its readiness. In the case of India, the procurement of S‑400 would provide it with sophisticated air defense technology but the financial as well as non‑financial cost is too high. China would be able to balance the effect of these sanctions as it has concrete indigenous military‑industrial complexes but India is only at its initial stage which makes it more important for India to be cautious towards the US.

However, India’s relations with either US, Russia or China cannot be disentangled easily. The relations between India and China although have been sore based on number of aspects ranging from historical border skirmishes to recent TikTok wars, but the data shows that China is India’s second-largest trade partner and along with that China has a huge investment in Indian trade and technology sector. This makes disengagement even more challenging as it would hurt the Indian economy which it cannot afford at the moment given its regional ambitions. While the US is India’s largest trading as well as a strategic partner, the significance of India-Russia relations cannot be ignored. Given the fact that national interest is supreme in international relations, India would continue to juggle its relations with the US, China, as well as Russia, even if they get turbulent, through the approach of neutrality and non-alignment. But this approach may undermine India’s trustworthiness and reliability. For this reason, the US and Russia would mirror a similar approach by only supporting India in terms of hard politics such as dumping its overpriced military hardware but disengage from soft politics such as economic, strategic, or diplomatic support against its adversaries. India’s position of neutrality and non-alignment with the desire to continue its purchase of S-400 therefore might keep the door open for further complications and suspicions.

Maheen Shafeeq is a research fellow at Centre for Aerospace and Security Studies (CASS). She is a graduate of the University of Sheffield, UK. She can be reached at cass.thinkers@gmail.com.