How America Can Win the Drug War in Afghanistan 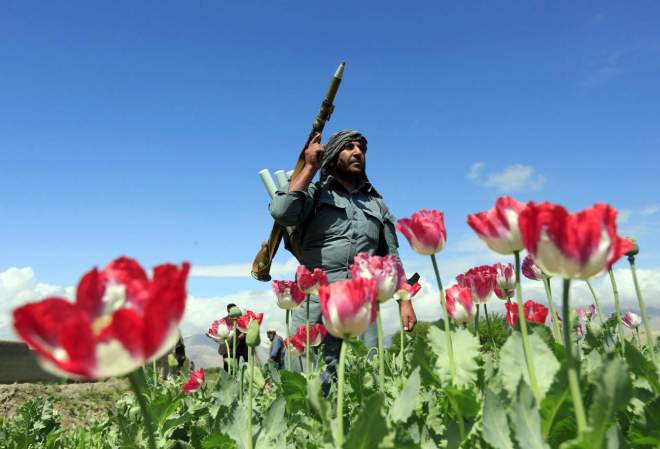 This past November, the United Nations Office on Drugs and Crime (UNODC) released its annual survey of opium poppy cultivation in Afghanistan for 2017. As ever, the survey’s findings are hardly surprising. They reflect the periodic fluctuations in the amount of opium poppy cultivated and produced in the country. Last year, cultivation increased to 328,000 hectares and production to nine thousand metric tons—a 87 percent increase over 2016.

Indeed, drug production and other challenges currently facing Afghanistan, the United States, and their common allies are cumulative. They did not spring up overnight. They have been evolving since the Taliban were driven from power in late 2001. In the case of narcotics trafficking, failure to properly assess the problem’s causes and effects is encouraging misperceptions.

The narcotics problem in Afghanistan has been cultivated by the past four decades of war, destruction and human suffering. We know from international experience that global demand for narcotics finds supply in environments where state institutions are weak, where general instability is high, and where poverty is rife.

Although Afghanistan is coping with such dire conditions today, the number of drug-free provinces in the country has increased from six in 2006 to ten in 2017, according to the UNODC. This progress has been achieved in provinces where the government is in firm control, delivering alternative assistance to farmers and prosecuting drug traffickers.

However, where the writ of the government is weak or has grown weaker, poppies have bloomed, despite the presence of U.S. and NATO forces. In fact, 95 percent of all of Afghanistan’s opium is grown in just eight provinces in the southwest, east, and northeast (Helmand, Kandahar, Farah, Nimroz, Uruzgan, Nangarhar, Balkh, and Badakhshan). In these areas, there has been a growing Taliban presence, and organized criminal groups remain strong.

Afghans understand that if they do not eliminate drugs, then drugs will harm their health and eliminate their livelihoods. Of course, fighting narcotics is not Afghanistan’s business alone, nor can the Afghan government do it by itself unless it receives help from its allies and those who join Afghanistan in the belief that narcotics is a common enemy of the whole international community—one that takes millions of young lives across the world every year, one that spreads HIV/AIDS, one that finances urban violence and crime, and one that increasingly fuels global terrorism and annually provides $200 million for the Taliban’s brutal terrorist activities in Afghanistan.

On the whole, Afghan opium fuels a global trade in heroin that generates over $60 billion in profits for corrupt officials, drug traffickers, organized criminal groups and insurgents, according to the U.S. Department of State. The U.S. government seems to understand the need for a comprehensive solution. Former President Obama once stressed a need for nonmilitary forms of assistance: “To advance security, opportunity, and justice—not just in Kabul, but from the bottom up in the provinces—we need agricultural specialists and educators; engineers and lawyers. That is how we can help the Afghan government serve its people, and develop an economy that isn’t dominated by illicit drugs.”

In the Afghan context, it is clear that the best weapon against narcotics is gradual, but steady prevention in the form of improved governance and rule of law, sustainable alternative development, and increased security. Quick fixes such as forced eradication of poppy crops merely target the effects of poppy production—not its underlying causes. We know from international experience that eradication alone is ineffective. Decreases in cultivation in one area can simply lead to increases in another, and news of impending eradication efforts can provoke growers to disperse cultivation over a larger area, much like investors diversifying portfolios to hedge risk. Counter-narcotics efforts, then, must be enacted contemporaneously across the country in a strategic manner.

Above all else, farmers must be given the opportunity and necessary resources to grow alternative crops. The problem is exacerbated by the fact that most Afghan farmers are sharecroppers, whose landlords dictate what they can grow. Consequently, the high-value opium poppy is the crop of choice.

Liberating farmers from this cycle of dependence requires that they have access to both land and alternative financing, in particular micro-credit. Further, to make alternative crops more lucrative to farmers, investments in infrastructure are needed. In addition to supplies of water, seed and fertilizer, farmers must have access to reliable farm-to-market roads or to cold-storage facilities to preserve products for later export. Today, besides the increasingly insecure ring road connecting Kabul to outlying provinces, Afghanistan lacks a farm-to-market road system, and only a small number of Afghans have access to electricity.

Once effective alternatives are available, farmers would have an incentive to try to transition away from poppy cultivation without paying a financial penalty. An initial grace period could be extended, beyond which noncompliant farmers would face crop eradication and criminal prosecution.

For example, in the western province of Herat, farmers, who have been helped switch away from growing poppy to saffron (a comparatively high-value crop), have done remarkably well. The Afghan Ministry of Agriculture, Irrigation and Livestock (MAIL) recently announced that Afghan farmers have earned $18 million in revenue from nearly eleven tons of saffron ($18,00/kg) produced last year, surpassing the estimated harvest. Even so, however, the Taliban threaten farmers not to grow licit crops, while some countries in the region, which also produce saffron, manipulate the saffron market against a fair competition, effectively discouraging Afghan farmers to grow the crop on a larger scale.

The article appeared in the National Interest on March 1, 2018