Hindutva: A Political and Economic Project of Shared Lies of Brahmanical Caste and Class Order in India 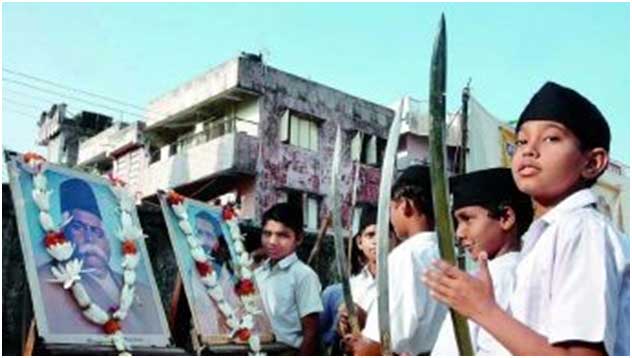 India is facing the worst crisis in its history. The Hindutva forces shaped by RSS and politically led by BJP are accelerating the crisis to undo liberal constitutional democracy in India. The political opposition is withering every day with the help of media, puppet police, investigative agencies, and the judiciary. The Hindutva blueprint is to declare India as a Hindu Rashtra (Hindu state) by viciously diminishing the citizenship rights of Muslims, minorities, and lower caste people. The success of RSS and BJP over the last three decades is based on poisoning the minds of the higher caste Hindus with the help of deceptive propaganda. Hindutva politics is reactionary identity politics of higher caste Hindus, which destroyed the unity of working classes and used lower caste in their political project, which weakened the emancipatory politics of Dalits and lower caste politics. The Hindutva forces have converted mythology as history and deception as an art, which diverts people’s focus on the objective reality of their everyday life and material conditions of mass suffering. The Hindutva project is an assault on reason, science, and society in India.

Hindutva is a distinctive political project of higher caste Hindus to ensure social, political, cultural, and economic control of the masses in India. Every fraudulent control mechanism of Hindutva is essential to normalise all forms of exploitation and naturalise inequalities in India. The apartheid ideals of the Brahmanical Hindu caste order are not compatible with constitutional democracy in India. Caste inequality is the foundation of the Hindu social order. The deepening of democracy is a threat to the Hindu caste order. Therefore, the Brahmanical forces are united behind Hindutva in the name of Hindu unity to uphold their control over Indian society. The colonial apologist Vinayak Damodar Savarkar has territorialised the bigoted idea of Hindu unity in his book Essentials of Hindutva and gave it a cultural outlook, whereas Keshav Hedgewar has shaped the political project of Hindutva by establishing the RSS. The fraudulent call for Akhand Bharat, construction of Ram temple in Ayodhya for cow protection are not only political consolidation of Hindutva forces but also establishment of cultural narrative for economic consolidation of capitalist classes and Brahmanical forces in India.

The fascist character of the Hindutva is concomitant with the requirements of the Indian and global capitalist classes. As Indians are sinking in sorrow and suffering from the loss of lives and livelihoods in a large scale due to the mismanagement of the global pandemic in India, the Indian capitalist classes are accelerating their profit on a massive scale. It is an opportunity for the capitalist classes in India to capture all national resources during the Modi led BJP government. The capitalists have always celebrated dictatorships and authoritarian governments, which help in the expansion of their profit and consolidation of capitalist classes. The corporate capital in India gets massive tax concessions but people face welfare budget cuts. The corporates make money while people suffer in miseries. This is no accident but a systematic economic strategy of the Modi government. The result is a visible disaster for India and Indians.

The love cum arranged marriage between Hindutva and neoliberal capitalism is no accident. The neoliberal capitalism has accelerated Hindutva politics as a dominant class and caste project in India. The RSS in all its political reincarnations from the Jan Sangh to BJP has always been a party of Brahmins and business communities and appealed to the dominant class and caste interests. The right-wing political movement led by Hindutva and reactionary economic policies of neoliberal capitalism has emerged together in India during the 1980s. They have strengthened each other over the last three decades and helped to consolidate and expand each other’s social, economic, cultural, and political base. Both these forces have used lies and deceptive tactics for their growth. Neoliberal capitalism and Hindutva politics are twins. These forces are accumulating profit by both dispossessing and assimilating people based on false narratives of Hindu nationalism. These forces have a common goal; the goal of disciplining labour, diminishing citizenship rights, and making people follow orders without questioning the power and authority.

The neoliberal Hindutva is a political and economic project of the capitalist classes in India. The institutional alliance between Hindutva politics and capitalist economy is a natural outcome in which capital accumulates with the support of the state and government and minimises capitalist conflicts and risks. Such an alliance and its outcomes are putting millions of Indians and their future in jeopardy.  If this alliance between Hindutva and capitalism continues to grow deeper and deeper, the greater dangers are awaiting India and Indians.

In this context, it is important to develop political alternatives by forging all forces as opposed to the troika of caste, capitalism, and Hindutva in India. It is impossible to fight Hindutva and capitalism without fighting caste-based discriminatory social order in India. All liberal, progressive, democratic, and left forces must realise the dangers of Hindutva fascism and its alliance with capitalism in India. Any compromise or surrender with these forces will breed miseries on a large scale for all Indians irrespective of their caste, class, gender, religious, and regional background. The united struggle against caste, capitalism, and Hindu right-wing forces can only save constitutional democracy in India both in the short and long run. No progressive struggles have failed in history and no struggle for alternatives will fail in India. Let’s fortify our future by defeating these reactionary forces led by Hindutva politics, neoliberal economics, and Brahmanical society in India. It is possible and imminent.