We need a good neighbor; our neighbor needs it too.

A good neighbor is the blessing from the creator. As the saying goes, you can change your life partner if it does not suit you, but cannot change your neighbor. Pakistan or India would have changed their neighbors’ long time back if there was any such choice. So it is the best and a wise policy to maintain a pleasant and comfortable relation with the neighbor.

The European countries fought against each other for centuries but as soon as they realized, it was better to have neighborly relations, the life suddenly changed. They reached the pinnacle of heavenly happiness and material prosperity. This could not have happened if they kept on fighting like before.

Taking a cue from the European experience of material, social and human development, we should be replicating the same. Instead, we keep antagonizing one another and compete in the wrong direction. We keep drumming up the words of hate and demonizing one another. The stronger neighbor says to the weaker ones; “you are either with us, or you are against us.” We do not try the middle ground. The respective media keeps cooking fake news to compete with one another instead of digging for real facts. Each country set up their propaganda machinery to feed into the popular sentiments.

A huge number of extremely poor people live in our part of the planet. We are using all of our efforts and resources against each other just to feed our inherited anger and hatred. We have beautifully encapsulated our national anger and hate in a superb art form. It depicts “we are humans; our enemies are monstrous.” Politicians shed crocodile tears for peace amongst neighbors citing the example of Europe. But they never tap into the depth of the problem. They are not interested in exhibiting the whole picture, rather a part of it that suits their trumped up national ego and propaganda. 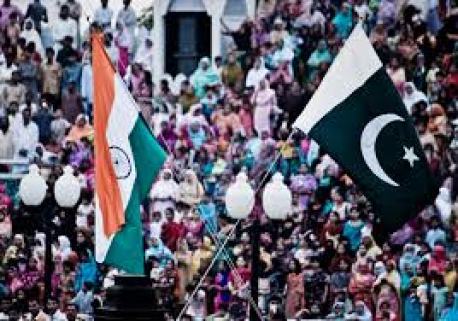 Pakistan and India are competing to buy arms in the world market while their people are under extreme poverty line. The birth of Bangladesh was expedited in 1971 owing to the bitter rivalry between India and Pakistan. For India, a weakened Pakistan was much better than Pakistan situated in 2 locations, and Bangladeshis got what they wanted. The relationship between Bangladesh and India is very complicated. For India, Bangladesh is still important to ally itself against Pakistan. Therefore, India chose to keep this small nation under her grip. India was directly involved in the success of Awami League in rigged elections. Bangladesh is now a one party state with a domesticated opposition just to make a fake show of democracy, thanks to India. It appears that a true democracy in Bangladesh is not suitable for Indian interests. Therefore, they were bent on keeping Awami League in power through all means; overt and covert. A so-called largest democracy is fiddling with the internal affairs of her strategically important neighbor.

We need to address the major obstacle on the way of building mutual trust among neighbors. People to people contact must be initiated instead of government to government. We badly need a democratic South Asia where no one country interferes in the others internal affairs. The idea is to establish a long-lasting peace, mutual trust, and cross-national free trade. We dream like Europeans but act like traditional sub-continental. We want to solve our problems with sly diplomatic methodology always trying to win by subduing our counterparts. We do not use our wisdom, trust and good faith for winning the confidence of our neighbors. South Asia has been blessed with many Machiavellian leaders but not a wise and visionary one who can lead the neighborhood in good faith and bring about prosperity and peace for the greater inhabitants.

It was a great pleasure to find few comments by some Indian readers on my last article “Bangladesh on the brink” published in South Asia journals on March 28, 2107 (http://southasiajournal.net/bangladesh-on-the-brink). One of the readers named Madhusudan Wagh has written,

“Excellent article. As an Indian, I would like to see Indian government stop interfering in Bangladesh’s internal affairs and let them attain a full-fledged democracy alongside a healthy growth in their economy. Bangladesh can be our good friend provided we don’t act as an ugly superpower and micromanage their internal politics. We have a record of being bad neighbours with other South Asia nations. I am sure Modi see this clearly but the South Block and RAW have to lay their hands off from Bangladesh.”

Above passage is self-explanatory. Mr. Wagh echoes the mind of over one billion people of South Asia whose souls are crying for the piece and desperately struggling to get freedom from poverty. They do not want to inflict pain on others but only interested in removing their own pains. The resources for enriching their lives are being wasted on armaments to inflict pains on others.

We should find the right people for a good cause for a real transformation of the greater South Asian society. We should make these voices louder against religious, racial and political madness. We should find more Madhushudhans in our midst. India itself has so many social and cultural fault lines. A wrong policy towards a smaller neighbor will only widen its own fault lines.

When I was writing this article with a good mood, in the midst, I was severely disturbed with news from my country, Bangladesh. The capturing of terrorist groups suddenly amplified throughout the country. Serious questions have been raised about this sudden increase just before our Prime Minister’s visit to India where a defense pact or memorandum of understanding is due to be signed. When the rival BNP government was in power, the top terrorist leaders were caught alive to be tried and disposed of as per the law of the land. But nowadays, there are loud broadcasts about showdowns of the killing of terrorists in a crossfire rather than arresting them alive. People’s perception of these arranged killings is clear. They are aware these are shows and many innocents and political foes are getting killed.

Recently, death of an elite force intelligence chief has been greatly mourned by the government and its compliant media but censored or silenced another important news of forced disappearance of a central student leader from the main opposition party.

This scenario is entirely frustrating. A distressed young lady from Chittagong, Bangladesh collapsed on her husband’s dead body and is weeping; saddening everyone around. Her husband, Mr. Nurul Alam Nuru was not a terrorist or a criminal, he was a student leader from Bangladesh Nationalist Party. Picked up from his residence by persons who said they belonged to the state forces and the next day, his dead body was found floating in a river in the Chittagong area. 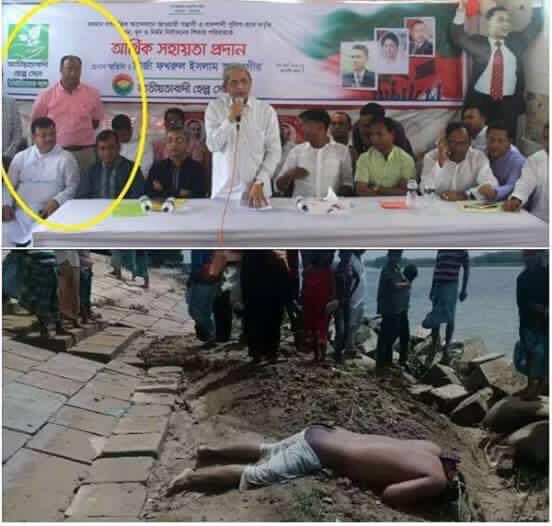 The unfortunate Nuru was organizing a program to help the distressed family members of the party leaders and activists who became the victims of recent forced disappearances and abductions. Now his family is utterly distressed. Who will help Nuru’s family?

Continuous utterances of fighting terrorism by this government are taken as a cruel joke. Journalists investigating cases of terrorist victims in the urban and rural areas often find the perpetrators of torture, killing and terrorism are the government law enforcing forces and the thugs of the ruling party. In Bangladesh, the word terrorism has been convoluted with terrorizing its own people under the guise of fighting international terrorism. Actually, they are decimating any viable political opposition.

Recently the Swedish Radio exposed a discussion by the law enforcement elite forces in their workshop meeting where they were being instructed how to accomplish a killing without leaving any traces. “If you find him – shoot and kill him, wherever he is. And then plant a weapon beside him.” The reader should visit http://bangladeshchronicle.net/2017/04/exclusive-officer-exposes-brutal-killings-by-bangladeshi-elite-police-unit-rab/ and https://sverigesradio.se/sida/artikel.aspx?programid=83&artikel=6665827 to get in-depth perception of the gravity of the situation in Bangladesh. 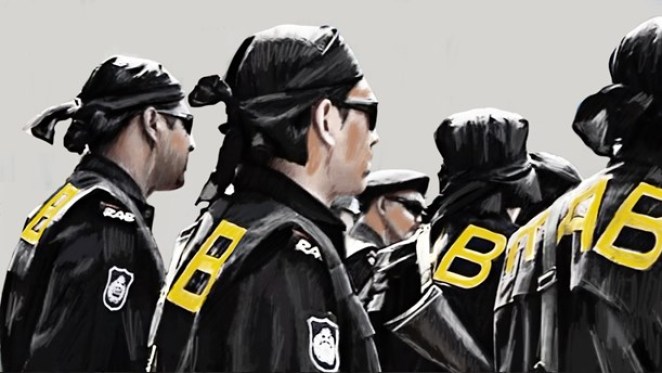 Bangladesh elite force RAB. På svenska: RAB:s avrättningar exponeras i hemlig inspelning
“If you find him – shoot and kill him, wherever he is. And then plant a weapon beside him.”

Investigative journalists often find a teenage girl in a family frightened or terrorized by a government party cadre or a thug. They would stalk the poor girl to the school or on her return from the school and terrorize her and her family for sex and political obedience. The mother in the house keeps worrying about the safe return of her husband, son or daughter. A young son like Nuru got abducted by the security forced and killed this way.

People’s minds are always occupied and terrorized with the pictures of uniformed or plain clothed state forces that pick up their relations to be never seen again. They are lucky if they find the dead body floating in a river or some remote place so that a proper burial can be given. A knock on the door at night terrifies women and children fearing the arrival of the angel of death. They are afraid their only breadwinner will be picked up and not be seen again. Bangladeshis, in general, are not worried about the religious extremists as much as the government party thugs and the elite security forces. The terrorism from state agencies and party cadre are very much real in their day to day life.

The majority of the people from our great neighbor are mostly fed with fabricated news giving a picture of Awami League government fighting terrorists. While a part of the story is right, the underline messages are missing. The government is decimating its opponents, by abduction and killing. Hasina government has given a false impression that she is fighting terrorists just like other nations trying to eradicate this scourge. As India is fully supporting Hasina, the people of Bangladesh are secretly harboring animosity towards India. This is not a good development for the friendly neighbors. .

If we want real peace in the sub-continent, we have to see beyond the forest. Just taking Hasina government’s views are not an accurate picture of what is going on inside Bangladesh.

In the 21st century, the need for peace is much more than what we had in the past. Our personal peace will arrive only when we let our downstream neighbors live in peace.