YANGON, Myanmar — It is unfolding again: Troops have unleashed fire and rape and indiscriminate slaughter on a vulnerable minority, driving hundreds of thousands of civilians to flee and creating a humanitarian emergency that crosses borders.

A crisis in Myanmar that many saw coming has brought a host of uncomfortable questions along with it: Why did the world — which promised “never again” after Rwanda and Bosnia, then Sudan and Syria — seemingly do so little to forestall an ethnic cleansing campaign by Myanmar’s military? And what can be done now to address the urgent humanitarian calamity caused when more than half of Myanmar’s ethnic Rohingya Muslims fled the country over just a few weeks?

Outside Myanmar, criticism of its military has mounted. The United Nations secretary general, António Guterres, has urged “unfettered access” for international agencies and called the Rohingya crisis “the world’s fastest-developing refugee emergency and a humanitarian and human rights nightmare.”

President Emmanuel Macron of France has called it genocide. And there is talk, although still tentative, of the European Union’s renewing targeted sanctions on people culpable in the violence that has driven the Rohingya from their homes in Rakhine, a state in western Myanmar.

But in Yangon, Myanmar’s commercial capital, where the diplomatic corps is based, there is still reluctance to call to task publicly either the military or the civilian administration led by Daw Aung San Suu Kyi. Some diplomats say they are trying to preserve whatever influence they may have left, in order to avert an even worse catastrophe.

More than half a million Rohingya Muslims have fled to Bangladesh since late August, when a Rohingya militant attack on Myanmar security posts catalyzed a brutal counteroffensive. Hundreds of thousands more remaining in Myanmar may still be trying to cross the border. Those who cannot flee are trapped and hungry in northern Rakhine, according to anecdotal evidence collected by international aid agencies, which the government has largely prevented from delivering relief supplies or even assessing need in the region. 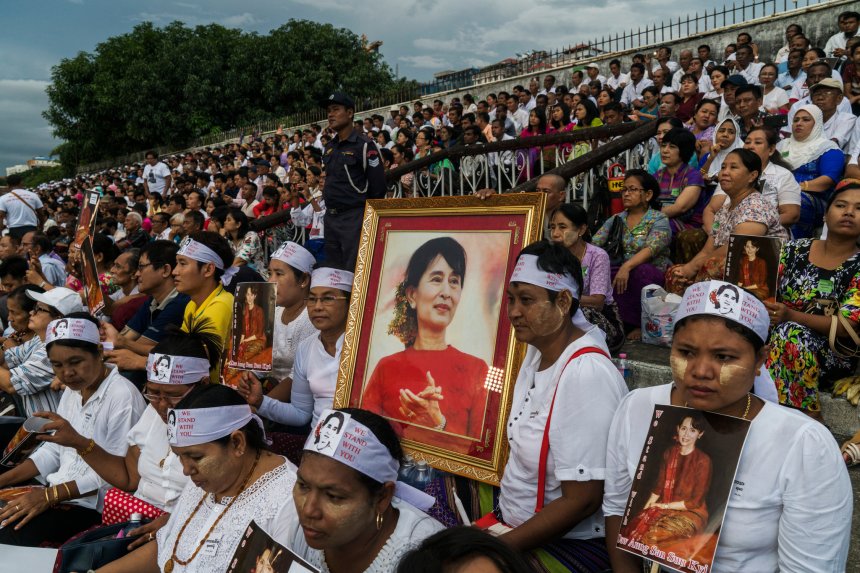 Aung San Suu Kyi supporters at an ‘Interreligious Gathering of Prayers for Peace’ organized by her party in Yangon on Tuesday. Credit Adam Dean for The New York Times

“There are few places on Earth where we are denied access to this extent,” said Jan Egeland, the secretary general of the Norwegian Refugee Council. “We have an office in northern Rakhine, we have staff there, we have supplies there, we could go tomorrow with our trucks — but we are being stopped. This is illegal, this is intolerable.”

I spoke to half a dozen ambassadors and senior aid agency staff members in Yangon about what the problem was. All asked to speak off the record.

There are many reasons for their reticence, but a major one is this: Myanmar has been presented as a success story, despite a host of economic and ethnic problems.

Elections in 2015 elevated Ms. Aung San Suu Kyi, the Nobel Peace Prize laureate whose name was once a byword for acts of conscience, and seemed to usher in a chance for democracy to take hold.

But whatever authority she has, as the nation’s state counselor, is dwarfed by that of a military that ruled for nearly half a century and continues to monopolize power.

Ms. Aung San Suu Kyi is not the one ordering Rohingya villages to be burned down or civilians to be massacred. That firepower lies with the Tatmadaw, Myanmar’s military, led by Senior Gen. Min Aung Hlaing.

In a Facebook post on Thursday recounting his meeting with the United States ambassador, Scot Marciel, the military chief called reports of a large exodus of Rohingya to Bangladesh an “exaggeration.” He reiterated that Rohingya were “not the natives” of Myanmar. 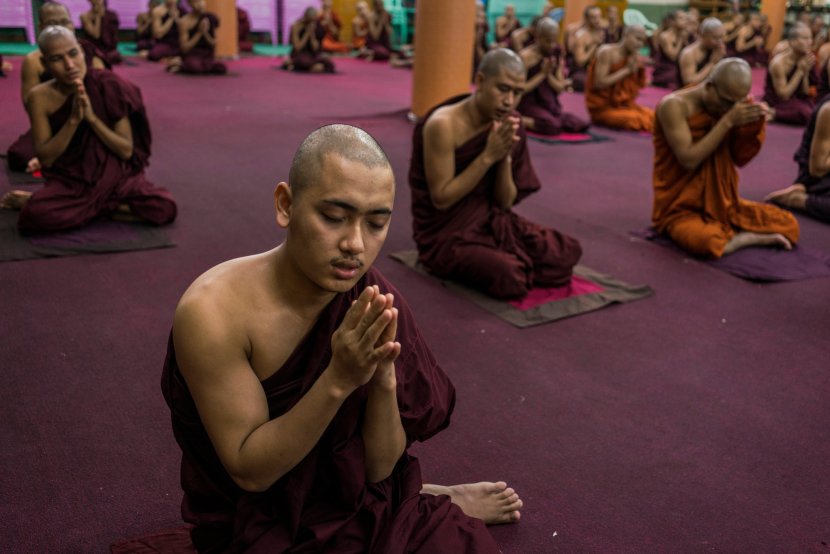 Monks praying in Bengala Monastery in Yangon, this month. Over the past year or so, Ms. Aung San Suu Kyi has played to hatred of Rohingya Muslims among Myanmar’s Buddhist majority. Credit Adam Dean for The New York Times

Diplomats say Ms. Aung San Suu Kyi used to express sympathy for the Rohingya in private, explaining that she could not speak out because of widespread hatred for them among Myanmar’s Buddhist majority. But over the past year or so, she has played to that prejudice, referring instead to the Rohingya as illegal immigrants from Bangladesh.

In a televised address on Thursday, Ms. Aung San Suu Kyi pushed back against international criticism and promised to personally oversee efforts to bring peace to Rakhine and repatriate those who have fled to Bangladesh.

In the speech, as in an address delivered to foreign envoys last month, Ms. Aung San Suu Kyi declined to tackle accusations that the military has unleashed arson, murder and rape on the Rohingya.

Despite Ms. Aung San Suu Kyi’s obfuscations, diplomats in Yangon have tended to avoid increasing public pressure. Veteran observers of Myanmar’s military, which has long faced condemnation for its brutality toward civilians and ethnic minorities, have warned that an international shaming of a disgraced Nobel laureate is just what the generals want.

“She gets all the criticism, and then the Tatmadaw gets to quietly do what it wants and what it has done for decades, which is to burn villages and terrorize ethnic areas,” said David Scott Mathieson, a longtime human-rights researcher in Myanmar.

Foreign envoys here are mindful of the complex politics. A nation does not emerge from 50 years of military dictatorship without political wounds, they say, asserting that pushing Ms. Aung San Suu Kyi, whose famous resolve can tend toward obduracy, could be counterproductive.

One senior Western envoy said that with no real coordination between military and civilian officials, weeks of flying back and forth to talk with them had come to nothing. The diplomat called it “by far the most frustrating issue I’ve ever worked on.” 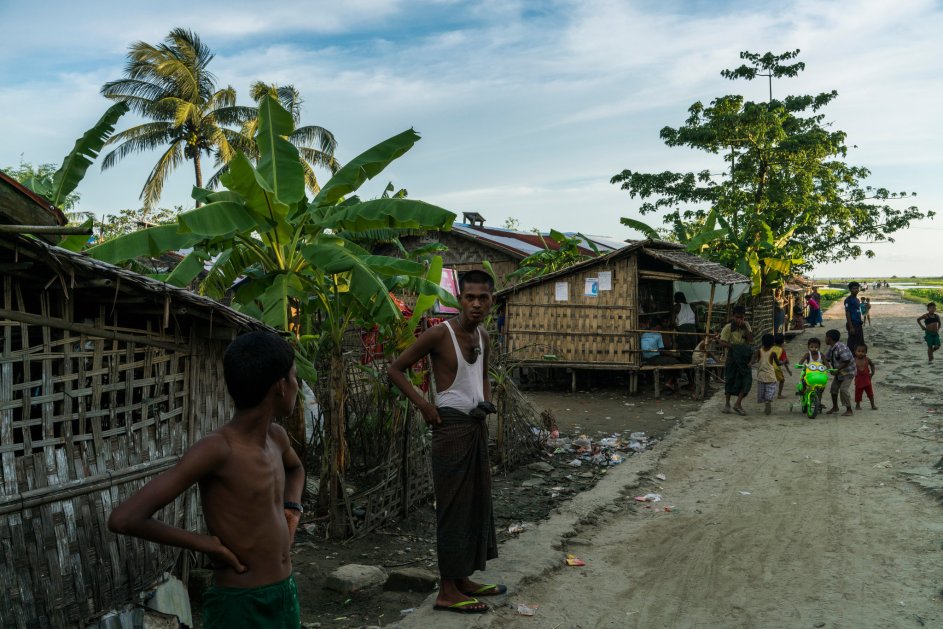 Rohingya in a camp in Sittwe, Rakhine, this month. The Myanmar government has prevented international aid agencies from delivering relief supplies or even assessing need in the area. Credit Adam Dean for The New York Times

Mr. Egeland, who once served as the United Nations’ under secretary general for humanitarian affairs, has grown impatient.

“I would like to issue a terse message to the diplomats,” he said. “I would like to disagree that it is a complicated situation. It is very simple: When humanitarians are not allowed to help civilians, people die.”

For its part, the United Nations in Myanmar commissioned an internal report, submitted in April, that warned against soft-pedaling on human rights to placate the military or the civilian authority.

“Trade-offs between advocacy and access,” the report said, “have in practice deprioritized human rights and humanitarian action, which are seen as complicating and undermining relations with government.”

The report’s author, Richard Horsey, noted how quickly the honeymoon period after the 2015 elections had subsided.

“We shouldn’t be surprised that the landing spot for Myanmar’s transition may be as one more Southeast Asian nation with authoritarian tendencies, rising nationalism and ethnic tensions,” he said. “But Myanmar should aspire to be so much better than that.”

Certainly, few countries enjoyed as much international good will as Myanmar did, at a time when the world was desperate for a positive narrative. 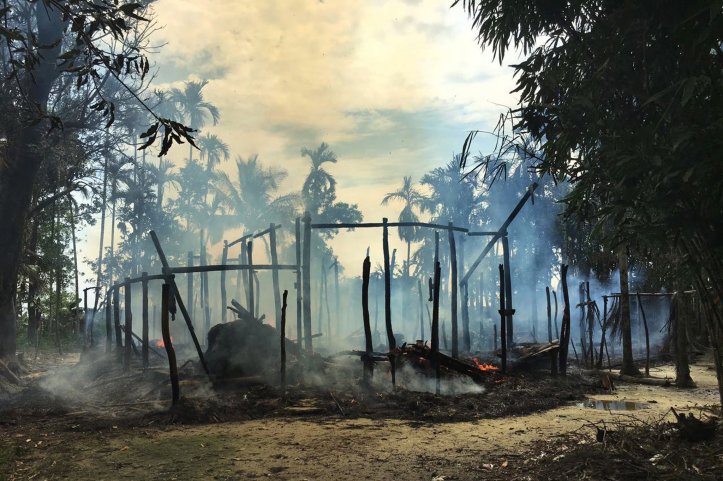 A burned house in Gawdu Zara village, in Rakhine state, last month. International aid workers with years of experience in Rakhine say that they have never seen the situation so grave. Credit Associated Press

“Western donors and the U.N. have not always been helpful,” said Charles Petrie, a former United Nations resident coordinator in Myanmar, noting “the refusal for a long time to let go of the fairy-tale view of Myanmar with Aung San Suu Kyi coming to power and the corresponding refusal to push back on some of her dogmatic positions.”

Mr. Petrie drew comparisons with South Sudan, where the world was “so taken by the narrative of a new country emerging from northern enslavement that the signs of the emerging violence were ignored.”

International aid workers with years of experience in Rakhine say they have never seen the situation so grave.

Brad Hazlett of Partners Relief and Development, a Christian charity that has provided food aid to the Rohingya, said he had been prevented from visiting internment camps this month in the state capital, Sittwe, that he had visited dozens of times before.

“I think their strategy is to starve them out,” he said.

Abul Hashim, a Rohingya from the northern Rakhine village of Anauk Pyin, described by cellphone how a team of ambassadors and United Nations officials had gone to the community on Oct. 2 as part of a stage-managed government trip. The crowds of officials who had helicoptered in promised food aid to the village.

But for nearly 10 days, Mr. Hashim said, his community has received nothing. For three months, none of the Rohingya have been allowed to step outside the village, he said. They have had no access to doctors or schools. All he, his wife, their three daughters and three sons had eaten that day was less than a pound of rice and some water.