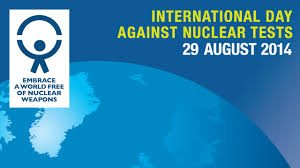 Dr. Kenneth T Bainbridge was the physicist who directed the first atomic bomb test and “Trinity” was the codename given to the world’s first nuclear explosion by Dr. J Robert Oppenheimer, known as the ‘father of atomic bomb’ for leading the World War II Manhattan Project that produced the first atomic bomb. His reaction to Trinity Test, in which he recalled a line from Bhagavad-Gita is also remarkable; “Now I am become death, the destroyers of worlds.” ‘The foul and impressive display’ of this plutonium implosion device were seen on July 16, 1945, at a site known as “Jornade del Muerto” located in the New Mexico desert at Alamogordo, some miles south of Los Alamos. The world lately observed the 71st anniversary of the dawn of nuclear age.

Since this first nuclear explosion till now, 2,120 nuclear test explosions have been recorded at dozens of test sites around the world by eight states: P5, India, Pakistan and North Korea. The US detonated 1,030 atomic bombs. Russia, the second nuclear power, tested 727 nuclear tests. The UK carried out 88 nuclear weapon tests, France 217, China 47. India tested its first nuclear device in 1974, while reportedly six other nuclear devices were fired in 1998. Responding to India’s nuclear weapon explosions, Pakistan detonated six nuclear devices at Chagai. North Korea exploded three nuclear weapons in 2006, 2009 and 2013 respectively and another one recently. To ensure the protection of people’s lives and environment, most of the atomic tests are conducted underwater or underground. However, almost 528 tests in early years were detonated in the atmosphere, resulting in the spread of radioactive material. Often the underground nuclear explosions also vent radiations into the atmosphere and leave radioactive contamination in soil.

To advocate the banning of nuclear tests and to educate the world about the legacy impacts of the nuclear detonation, UN unanimously approved a draft resolution on December 02, 2009, to declare 29 August the “International Day against Nuclear Tests”. The resolution was initiated by the Republic of Kazakhstan with a view to commemorate the closure of the Semipalatinsk Nuclear Test Facility on August 29, 1991, which was the world’s largest underground nuclear test site containing 181 separate tunnels and almost 460 nuclear explosions were conducted there, few reportedly resulted in dispersion of plutonium in the environment. The facility was closed by Kazakhstan government after the dissolution of USSR in 1991. After the establishment of International Day against Nuclear Tests, all states parties to NPT committed themselves to “achieve peace and security of the world without nuclear weapons” in May 2010. The inaugural commemoration of the International Day against Nuclear Tests was marked on August 29, 2010.

Therein lies the question as to why states detonate nuclear weapons if they jeopardize human health and the environment. And is it enough to celebrate an international day against nuclear tests or what other international mechanism has been placed in this deference? Pragmatically, states conduct nuclear tests to evaluate new warhead designs and to create more sophisticated weapons. An international instrument to ban all civilian or military purposed nuclear tests in all environments is not novel agenda of nuclear arms control. In August 1963, Partial Test Ban Treaty (PTBT), signed by the US, UK and USSR, entered into force and banned the nuclear testing of signatory states in the atmosphere, outer space, underwater but not underground. Though underground, not only the nuclear weapons testing continued the quantity also increased.

Later, PTBT became redundant with the signing of Comprehensive Test Ban Treaty (CTBT) in September 1996, which bans all nuclear explosions in all environments. Before CTBT, all treaties entered into force limit but not ban the nuclear tests. Nonetheless, CTBT will enter into force only after the 44 states listed in the treaty ratify it. Of which 41 signed the treaty, 36 ratified, while DPRK, India, and Pakistan have neither signed nor ratified. Interestingly, five nuclear-capable states Egypt, Iran, Israel, including two NPT signatory states China and the US, have signed but not ratified CTBT. The conferences to facilitate the objectives of CTBT takes place every other year, and 2016 marks the 20th anniversary of the opening for signature of the treaty. Since 1996, India, Pakistan, and DPRK have tested their nuclear weapons while many states including US and Russia claim they have not tested nuclear weapons since this timeframe.

Although, in 2009 President Obama outlined his vision of a world free of nuclear weapons but later he forged new treaties to reduce the number of and spread of nuclear arsenals. On the contrary, he promised in his 2010 Nuclear Posture Review to uphold the triad of nuclear arsenals supported by every former US president. At the end of 2010, US ratified New START agreement with Russia to limit both sides’ arsenals to 1,550, but again no advancement ensued on a treaty which puts a permanent ban on nuclear tests.

Notwithstanding that US and Russia did not explode nuclear weapons after signing CTBT, since 1997-2014, US has held twenty-eight ‘subcritical, sub-zero tests in the form of computer simulations’ at the Nevada National Security site. Conversely, Russia has also been conducting subcritical experiments involving both uranium and weapons-grade plutonium at Novaya Zemlya test site near Arctic Circle. It means that in the absence of an option for underground testing which previously provided assurance about the reliability of deployed nukes, the designers of nuclear weapons now depend on computer simulations along with laboratory level nuclear tests to ensure and enhance the safety and reliability of nuclear weapons.

Los Alamos National Laboratory was the first to conduct the subcritical experiment in 1997. The website of US Department of State on computer simulation says, “Today, weapons designers benefit from better simulation tools and computers capable of running highly detailed calculations. Successes to date indicate that a cadre of world-class scientists and engineers can employ physics-based simulations, modern experiments, validations against collections of re-analysed data from previous underground nuclear explosive tests, and peer reviews to support stockpile decisions well into the future without the need to return to nuclear explosive testing. These computer simulation advances provide the United States with the ability to monitor and maintain the nuclear weapons stockpile without nuclear explosive testing.”

Evidently, keeping an option by not ratifying CTBT and conducting subcritical tests shows that the US aims to improve its arsenals qualitatively and want to maintain its option or ability to conduct onerous underground nuclear testing if it becomes indispensable. Inevitably, Russia would also change its attitude towards CTBT although it ratified CTBT in 2000 if the safety or readiness of their nuclear would no more comply with the treaty. CTBT is a zero-yield ban but the US and UK held “hydronuclear” tests with yields up to four pounds, whereas Russia, France, and China chose yield limits of 10 tons, 300 tons, or an exemption for peaceful nuclear detonation, respectively. Such yield limits are unacceptable to many NNWS while a preference for peaceful nuclear explosion exemption has been rejected by almost every NNWS.

Thus the contour of subject is that there is still a possibility to modernise the nuclear warheads components, verify the reliability of aging nuclear stockpiles and stimulate the environmental effects even if all 44 states ratify CTBT because it does not stop from hydronuclear, subcritical test through computer simulation and allows NWS to qualitatively improve their arsenals at sub-zero. A grim reminder on International Day against Nuclear Tests is that a discriminatory CTBT would not fulfill the nuclear-test-ban ethos till it removes any escape routes including explosives or non-explosive tests.