Attack by right-wing goons the latest example of harassment of inter-faith couples in Uttar Pradesh. 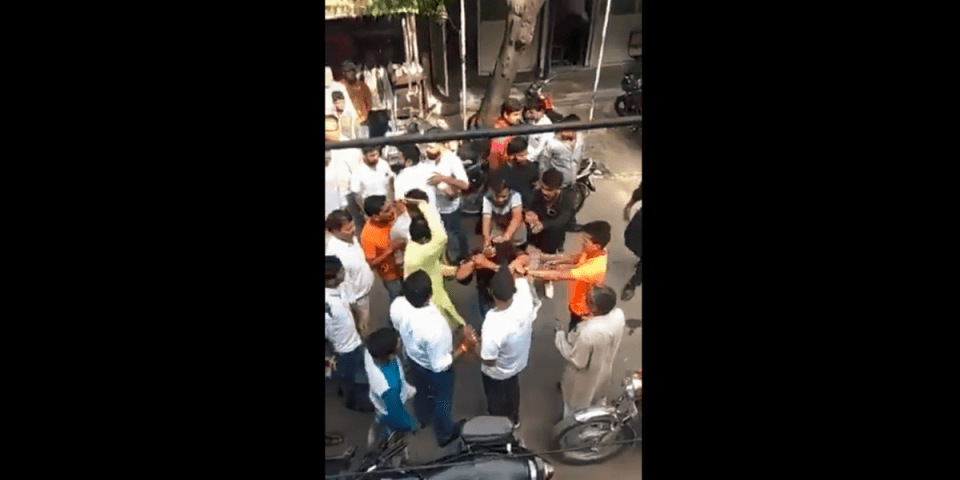 A screengrab from the video showing the assault. Credit: Twitter

The Wire Staff      24 July 2018
New Delhi: A Muslim youth was assaulted on the premises of a court in Ghaziabad, allegedly by members of a right-wing Hindu organisation, a report in the Hindu said. Sahil, the Muslim youth, was going to marry a Hindu woman.

Sahil hails from Bhopal. He met the woman Preeti Singh, a native of Uttar Pradesh, at his workplace. “After they fell in love, they decided to marry. But their parents were not agreeing to the marriage. The girl is a Rajput by caste and the man, a Muslim. So, the couple wanted to register their marriage at Ghaziabad court as a friend told them that it is a safe and easy process there,” the report quoted a police official as saying.

The couple were to get married on Monday at the Ghaziabad court. On the court premises, a group of men reportedly forced their way into the advocate’s chamber, where they attacked Sahil. The police reached the spot and brought the couple to the Sihani Gate police station.

While the couple have refused to register a complaint, a police official has registered a case against unknown persons under his own complaint. “We have registered an FIR against unknown people under IPC section 147 (rioting), 323 (causing hurt), 504 (intentional insult with intent to provoke breach of the peace) and 506 (punishment for criminal intimidation) at Sihani Gate police station,” the official reportedly said.

The video of the attack has gone viral on social media.

‘Love jihad’ is a term coined by Hindutva groups to project inter-religious romance or marriage between consenting adults as an “attack” on “Hindus”.

Since 2014, there has been an increasing number of incidents involving members of BJP and RSS and their affiliated outfits attacking inter-religious marriages on the pretext of countering ‘love jihad’.

Last December, BJP and Bajrang Dal workers clashed with the police in Ghaziabad over the marriage of a Muslim boy and a Hindu girl.

Twenty-eight-year-old Nupur Singhal, a doctor, married 30-year-old Mansoor Harhat Khan, an MBA, at a Ghaziabad court under the Special Marriage Act. A reception was held at the girl’s house at Raj Nagar in Ghaziabad. By afternoon however, a massive group of various Hindutva outfits, led by BJP Ghaziabad city president Ajay Sharma, descended on the woman’s home. They staged a sit-in protest outside the house and disrupted traffic.

Failing to pacify the protesters, police ordered them out of the area and later lathi-charged them after the protesters refused to budge.

The police even tried to organise a dialogue between the Bajrang Dal members and the family. The family, which said it was not interested in any such dialogue, insisted the marriage was their private business.

Pushpendra Kumar, the father of the bride, had told IANS at the time, “They have decided to live together, so they have registered their marriage under the Special Marriage Act in Ghaziabad. We had arranged a reception party today (Friday). I don’t see any love-jihad in their marriage.”

Last month, an inter-faith couple in Lucknow were harassed by an official at the passport office for having married out of religion. Though their documents were in order, they only received their passports after external affairs minister Sushma Swaraj intervened.