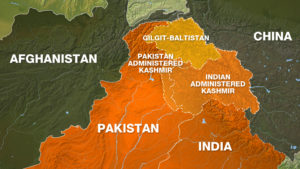 ISLAMABAD  – Residents of Gilgit-Baltistan have threatened to shut down the Pak-China border if Beijing does not release over 50 women of Chinese origin married to G-B men, who have been detained in the neighbouring Xinjiang province.

An all-party conference held recently urged the Chinese government to immediately release the detained families including children of the G-B traders. It had demanded run the affairs of the Pak-China trade as per the protocol agreement. They had demanded that those traders possessing border passes should be given access to interior China and the duration of border passes should be extended.

It had also urged the Pakistani government to establish an office in Kashgar city of Sinkiang to address the problems being faced by the Pakistani traders.

A joint declaration by representatives of the PML-N, the PPP, the PTI, the Islami Tehrik Pakistan, the MWM, the Awami Action Committee, the Chamber of Commerce Gilgit-Baltistan and the all federation chamber of commerce warned that if their demands were not met timely, the people of Sost valley in G-B would boycott any commercial activity on the Pak-China border. Copies of the declaration have been sent to G-B governor, chief minister, chief secretary, the Ministry of Foreign Affairs and the Chinese embassy in Islamabad.

“It is a serious issue and if the matter is not resolved immediately it may harm the relations between Pakistan and China,” said PPP G-B President Amjad Hussain told The Nation.

“It is the job of the Foreign Office to safeguard its people but it has failed miserably,” Amjad said. He also blamed the Pakistan embassy in Beijing for not performing its duty.

According to locals, wives of over 50 citizens of G-B have been detained in China for the last year without any charges against them.

“It is like dying every day. I feel intense pain and grief. Sometimes, I become totally blank – missing my children and wife is like you have lost some of your body part – something vital one,” said Ali, a resident of GB, whose two children and wife have been detained in Xinjiang province.

He said uncertainty was killing, his whole life is torn apart. It has been almost one year that he has not heard anything from his spouse and children.

“It is very unfortunate. I am alive but my kids are living without parents, my wife is detained in a school building turned into a prison,” he said. The locals said the Pakistani traders have been visiting China since ages and during last decades, many married Chinese women, while they were in China on business visits.

“It was sheer luck.  It was 2007.  I was in Kashgar and busy importing goods to Pakistan when I met a nice Chinese girl and married her,” said Ali.

He said that after the marriage, the Chinese government issued him a residency permit. Later, he shifted back to Gilgit, where his wife started teaching locals.

In the winter vacation, they all went to China, and his spouse went to visit her parents to her native village, while he was in Kashgar city.

“I cannot forget that horrifying call- my wife was crying intensely- between her sobs- she told me, the police are taking her to investigate something related to her Pakistan visit and will release in a day or two,” he said. “But she never came back nor I could know where she is -since then, I am running pillar to post, I have knocked every door I could,  I have registered my complaint with the Pakistan embassy in Beijing- the interior ministry – all offices of GB but nobody heard my plea,” he continued.

He said that his visa was not extended and he was sent Pakistan after some time. When he got the visa again from Islamabad, he was stopped at Pak-China border at Khunjerab.

“Despite having a valid visa, they told me to go back, I begged them to let me enter their country- my wife- two-year-old son and eight-year-old daughter were there – and I want to take them back- but they remained indifferent,” he said expressing his helplessness.

Ali is one of the dozens of G-B residents- who have married Chinese women years ago – but their wives have been detained in China. G-B and Xinjiang have a history of the relationship. Chinese Kashgar are settled in different parts of GB and are called Kashgari.

Around 160 locals daily pass the world’s highest paved border crossing the Khunjearb pass. The G-B residents are known as most peaceful and cultured – with high literacy rate.

There was a pact between the then Hunza State and the Chinese government in ancient times. “We have been told by our grandparents that the household items were brought from Kashgar until the state(s) were merged into Pakistan,” said Dr Astori, a local.

According to Human Rights Watch, the missing women have been forcibly detained in makeshift prisons called,  political education centres, since April 2017.  Those who have not committed any crimes, but deem politically unreliable are detained there. Those, who travelled abroad- or having families who live abroad – or found participating in unauthorized religious activities, such as wearing headscarves or other Muslim attire, or merely for having relatives who had been previously arrested by the government, are kept here.

According to the watchdog, the detainees are compelled to renounce their ethnic and religious identities.

The detention has resulted in anxiety and fear among residents- who depend heavily on trade across the border.

The matter was highlighted, last month when GB Legislative Assembly (GBLA) passed a unanimous resolution asking the federal government to take immediate steps for the release of over 50 Chinese wives of GB men -detained in Xinjiang province of China.

Sources in the Foreign Office said that they have not received any request from the G-B government and they could act on an official government request only.

G-B locals denied the FO stance and said that the government representatives had been participating in the meetings and at the last meeting, GBLA Deputy Speaker Jafferullah was entrusted to communicate the issue with the Foreign Office. “If the border is sealed, both the Foreign Office and GBLA would be responsible,” Amjad Hussain said.

The artcile appeared on the Nation, Pakistan on March 27, 2018