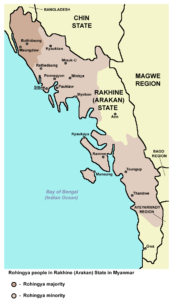 In my earlier article “Myanmar military’s addiction to political power” I tried to explain how the Myanmar’s military very reluctantly relinquished the active political power but still held on to the roots so that it can still dictate the future policy. It is keen to create some problem and keep alive that problem to justify their role in the political domain. The present Rohingya crisis is their creation, and they shall keep it alive to prolong their activities in the name of solidarity and sovereignty of the country. In this respect, they are even ready to go to a limited war with Bangladesh to justify their hold on the political life of Myanmar as to how necessary they are to preserve the unity of Myanmar. They know for sure that Bangladesh army shall not indulge into a border war to risk their lucrative UN peace-keeping roles and that Bangladesh prime minister is still hoping for a Nobel Peace Prize.

The history of Arakan (present Rakhine) is fascinating. It was once part of Bengal. Then in 15th and 16th centuries, i.e., for long 200 years, Muslims were deeply involved in their history. Famous Bengali poets Daulat Kazi and Alaol spent most of their lives in Arakan. Defeated by Aurangzeb, his brother Shah Shuja took shelter in Arakan with his great followers. He was finally defeated and killed by the King of Arakan. Some say the war happened because the King wanted to marry Shuja’s daughter but others say that Shuja was conspiring against the King with his Muslim ministers and advisers. However, in 1784 Arakan King lost the battle with Burma and it was annexed by Burma. The last Mogul Emperor Bahadur Shah Jafar spent last part of his life in exile in Burma. He was also a famous poet who wrote Ghazals in Urdu and Farsi. He is buried in Burma.

Burma as a whole and Arakan, in particular, has always been rich in agriculture, fishing, mineral resources and forestry. Burmese men, those days were addicted to drugs. Burmese women worked hard for the families. Lots of people from Bengal (mostly from Chittagong and some from Noakhali) went and settled there. That was some hundred years back. The last of these Bangalee men went as civilian support for the British army under Brigadier Bill Slim to fight the Japanese during WWII. Ayub Khan, Usmani and Aung San fought alongside Bill Slim to drive the Japanese out of Burma. In 1947, when the British were negotiating with Aung San (as a virtual Prime Minister) for the first phase of the handover of power, Aung San was mysteriously murdered.

Burma gained independence in 1947 and was still a nice peaceful and prosperous country where people of all religion and ethnicity lived together in total harmony. Bengali Muslims being more educated dominated timber trade, jewelry, and fish export. In 1962 General Ne-Win took over power and nationalized everything. The flourishing trade, commerce, and industry came to stand still. The military lacked the knowledge of modern science, economic and social science. They failed to find a cure for the economic collapse. They had to find some excuse. They found the explanation in their prosperous Muslim community. The hatred campaign started. This was something that can only be compared to what Hitler did to the Jews and Idi Amin against the Indians. The military in Burma made a new nationality Act in 1984 which was carefully worded to deprive the Muslim population of their right to citizenship. They tried to unify the majority Buddhists on this issue. They did their utmost to keep attention away from democracy by engaging them against the Muslims as if Burma will become Switzerland if they can get rid of Muslims. Nearly 5% of the population were made stateless. Most of these people lived in Burma for generations. They were deprived of all state facilities including education and health care. Inter-racial marriages were banned, and restrictions were imposed on Muslim marriages and right to have children. They could not get a license to operate any business. On the other side, the military even changed the name of the country and spent millions to build a new capital. Nothing worked.

The first challenge the military came across was in 1988. There was a mass uprising. Thousands of students and young people laid their lives for the cause of human rights and democracy. A new military regime came into power and declared martial law. That was also the year when Aung Suu-Kyi returned to Myanmar and declared to continue her movement for democracy. She never returned to the UK even when her husband died. The new military regime declared that elections would be held within two years. They never expected Suu-Kyi to win the election within two years of her return to Burma. But that is what happened. The military government annulled the results of the election on some procedural matter and put Suu-Kyi under house arrest.

Su-Kyi was given the Noble Peace Prize in 1991 for her peaceful struggle for democracy. World leaders (including US President and British PM) visited Myanmar only to meet and greet Su-Kyi. The message was well received by the military junta. They started their research work as to how they can still enjoy political power in the disguise of democracy. This time they carefully drafted a new constitution to ensure that:
Su-Kyi can neither become head of the state nor the head of the government (because her husband was a foreign national and her children had foreign nationality);

Two-thirds of the seats in the Assembly would be reserved for Armed Forces so that the Constitution cannot be amended;

Ministry of Defence and Internal Security shall remain with the military;
The military council would be discussed on all matters of national importance;

The military put the constitution to a referendum which they won because something was better than nothing. The 2010 election was rightly boycotted by Su-Kyi and her party NLD. Thein Sein supported by the military became the president. Myanmar got a military government in the shape of an elected democratic civilian government. Thein Sein’s primary duty as a president was to have several meetings with Buddhist monks to convince them that the national identity was in danger unless the Muslim population was eliminated. Now the military along with local Buddhist thugs waged a campaign of torture, rape, killings, burning, and looting. The ownership of gold and jewelry business in Yangon changed hands overnight to become Buddhist owned business. The terrorized Muslims were herded into some concentration camps. The Muslim population of Myanmar became a refugee in their own country.

Under political pressure from home and abroad, Su-Kyi bowed to glamour and glory of becoming a minister. She participated in 2012 by-election and then the 2015 general election which her party won with a thumping majority. The military leaders had a series of meeting with her. The military was worried that she might refuse to form a government and continue her movement for inclusive democracy. In fact, that was the best time to do so and defeat the military once for all. But Su-Kyi came to some compromise with the military junta and became the State Counsellor.

Under pressure from the military, Su-Kyi refused to accept a mission from OIC (Organisation of Islamic States). She even refused to welcome any UN fact finding mission. However, she appointed an independent commission headed by Mr. Kofi Anan of Ghana (former Secretary-General of the United Nations) to look into the Rohingya matters and give a report with the commission’s recommendations. Mr. Anan, a former secretary general of the United Nations and a man of principle, stood above all considerations and showed his character to expose the crimes committed by the military. The main points of the report are outlined below:

The 1984 Nationality Act was wrong to deprive people of their nationality after being a part of that nation for so many generations. This Act must be reviewed.

It was wrong to deprive the Muslim population of all their fundamental rights for business, education, and health-care.

The commission found evidence of state sponsored systematic torture, rape, and killing of the Muslim population. The commission asked the government to stop all such activities immediately and also to take appropriate action against those responsible.

The commission found no reason for total isolation/ segregation of the Muslim population. The report asks the government to facilitate social integration.
What the commission found amounts to genocide and ethnic cleansing. The military was not prepared for such a report. No sooner Mr. Anan’s press conference was over; the military got into action. It started such degree of terror and killing so that the world attention would be focussed on the humanitarian matter and away from the Anan report. Su-Kyi having compromised with the military to get to power, had no courage to accept the Anan report or to implement it. Instead, she joined the military to say that the military was clearing away the terrorists. Su-Kyi is presiding over mockery of a democracy where the real strings are still pulled by the military generals.
I am not very certain if an armed group has indeed surfaced. If so, it is the creation of Myanmar army. Where will the Rohingyas go? Myanmar army has been trying to crush them, and Bangladesh has no reason to accept them. Military brutality cannot solve the problem. A political solution is an answer. Su-Kyi has to declare that Anan report will be implemented publicly. Those taken shelter in Bangladesh has to be taken back in Myanmar. Social integration must take place with utmost sincerity.

Bangladesh already had 400,000 in various camps. The recent arrivals number another 400,000 bringing the total to about 800,000. These people were born and grew up in Myanmar, and Bangladesh is a foreign country to them. Another about 50,000 is estimated to have been killed by Myanmar army, and yet another 3,000 may have drowned while trying to escape. Rohingya villages have been burnt.
At the peak of this crisis, Prime Minister Narendra Modi of India visited Myanmar. To utter surprise of the world, Mr. Modi expressed his solidarity with Myanmar in its efforts to tackle the terrorists. More interesting was the statement of Su-Kyi. She said that she discussed with Mr. Modi about terrorism because India also had a substantial Muslim population. They both showed their hatred for Muslims. As I said before the freedom fighters of Palestine, Kashmir and Arakan are not terrorists but are soldiers of human rights and democracy.

Malala, the youngest recipient of Nobel Peace Prize, called on Su-Kyi to stand for the truth and uphold the dignity of Nobel Prize. Professor Yunus, another recipient of Nobel Peace Prize, asked Su-Kyi to publicly say to the Rohingyas, “Myanmar belongs to you as much as it belongs to me.” Dalai Lama of Tibet said that atrocities committed by Myanmar army bring shame to all Buddhists all over the world. Neighbouring Thailand which has a Buddhist majority has opened its door to provide shelter to fleeing Rohingya Muslims. Still, Japan provides the largest economic aid to Myanmar and China provides the military aid.