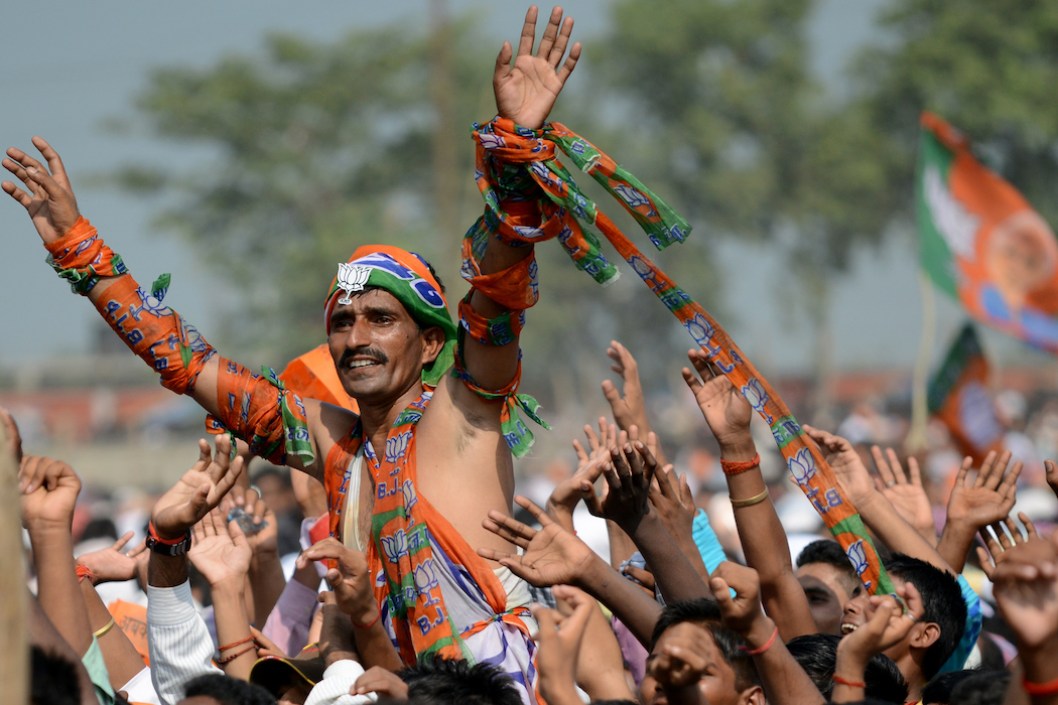 Supporters cheer as Indian Prime Minister Narendra Modi delivers a speech in October 2015 during an election rally in Aurangabad, where two people died in a recent Hindu-Muslim riot. (Photo by Money Sharma/AFP)

Fears of politically engineered communal strife loom large in India ahead of national elections following the arrest of two politicians charged over sectarian riots in a western town.

On May 15, four days after a Hindu-Muslim riot killed two people in the city of Aurangabad in Maharashtra state, police arrested one man from a hard-line Hindu group and another from a Muslim organization.

“Riots always bring death and destruction, but if anyone benefits, it is the political class,” said Sanjeev Verma, a New Delhi-based civil society activist.

Some parties opposing pro-Hindu groups also entangle religion with politics by proclaiming themselves to be protectors of religious minorities and Dalits, formerly known as untouchables, against Hindu fanatics, Verma said.

The men arrested in Aurangabad were Feroz Moinuddin Khan of the All India Majlis-e-Ittehad-ul Muslimeen and Rajendra Janjal from the Shiv Sena political party.

While Khan is accused of instigating mob violence, Janjal was arrested on charges of setting vehicles on fire during the violence, police were reported as telling local media.

Critics such as Verma cite reports that instigation of the Aurangabad rioting was planned in advance and argue that this was a typical example of an engineered tragedy. Some police personnel were also accused of involvement in the riots.

And Verma cautioned that the role of politicians in the Aurangabad upheaval should not be viewed as an isolated case. “It symbolizes what is in store for this country,” he said.

National elections are due in May next year when the federal government led by pro-Hindu Bharatiya Janata Party (BJP) completes its five-year term. Elections in three major states — Madhya Pradesh, Rajasthan and Chhattisgarh — are scheduled for the end of this year.

His state, India’s most populous with 204 million people, witnessed 247 Hindu-Muslim flare-ups in 2013 ahead of elections. In the national elections in April 2014, the BJP had a landslide win by securing 71 of the state’s 80 federal parliamentary seats.

Ansari said the rise of the BJP could be attributed to riots that followed it fomenting 1992 Muslim-Hindu violence over the disputed site of a Ram temple in Uttar Pradesh. The BJP capitalized on the riots that followed the demolition of a mosque there to win 161 parliamentary seats in the ensuing elections in 1996, emerging as the largest party in national parliament.

“This is what will happen again as the party has failed to fulfil its promises of growth and development,” Ansari said. “It will be religion again that will take center stage.”

He said it was easy to spark religious passions among people through riots and cited cases of Hindus objecting to Muslims praying on public roads.

In Aurangabad, clashes started after its municipal corporation allegedly cut the water supply to a mosque saying it was illegal. The corporation is run by the pro-Hindu party Shiv Sena.

Soon after the taps dried up, Muslim youths hurled stones at the corporation’s building and nearby Hindu shops, giving rise to the Hindu-Muslim clashes.

The trouble spread quickly across the town as unruly mobs began to set vehicles and shops on fire, killing a 65-year-old Hindu woman.

More than 50 people were injured, resulting in police opening fire to disperse the mob. A Muslim teenager was killed in the police response.

Just as in Aurangabad, other minor incidents can lead to major riots as emotionally vulnerable people are inflamed on the basis of religion, observers say.

Government data shows India witnessed 7,484 communal incidents between 2008 and 2017, an average of two a day, which claimed the lives of more than 1,100 people.

Zafarul-Islam Khan, chairman of the Delhi Minority Commission, told ucanews.com that thousands of people accused of rioting have been let off from legal proceedings because of their political connections.

Following the infamous Gujarat riots in 2002, thousands were absolved by a police investigation.

“We also see criminals and terrorists come out of jails because witnesses declined to testify or because of outside influences,” Khan said.

In any case, those convicted in riot cases were as low as 18.1 percent in 2016, according to the data of the National Crime Record Bureau, a federal agency. Since 2001, the rate had fallen from 27.1 percent.

Hindu-Muslim tensions stem from centuries of mistrust. Many Hindus see Muslims as descendants of invaders who plundered their villages and engaged in forced conversions.

Jesuit Bishop Francis Serrao of Shimoga in Karnataka state told ucanews.com that India witnessed such “unfortunate incidents every now and then.”

He said both Hindus and Muslims need to understand the importance of avoiding violent conflicts instigated by vested interests.

“Otherwise, the majority-Hindu community has no problem with the minorities of the country,” he said.

“They have been living here for centuries in peace and harmony. There are elements who don’t want peace.”