DICTATOR’S MUSINGS – THE COUNTRY WILL NOT SURVIVE WITHOUT ME 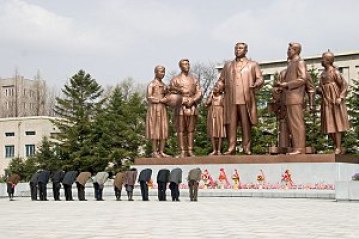 Corruption comes in different forms. Corruption for money and wealth is a pervasive one. In politics, another kind of corruption is prevalent – the lust for power. Initially, they would ask for more power so that they can execute development plans more efficiently. But it does not stop there. Then it is for staying in authority for a longer period. The love and lust for power take them to a stage that they think they are indispensable for the country. The country cannot prosper without them. Finally, they believe that the country would not survive without them. There is one word by which they can best be defined as – dictators.

Dictators belong to various categories. Some of them are absolute monarchs such as the king of Saudi Arabia. Some of them are military dictators as we had in Myanmar. But the most dangerous are the so-called democratically elected dictators. These dictators come into power through a democratically elected process but then try to perpetuate their rule. There will be elections, but the dictator will always be the winner. The first thing they will do is to control the freedom of expression by making sure that papers and journals do not publish anything that they would like to see released. They would gradually turn the police and civil service away from their independent and impartial role to that of their political line. They will have several security agencies to detect any deviation from their given guidelines. There will be extra-judicial killings in the name of cross-fire or gun-battle. In some cases, opposition leaders may be made to disappear without any trace quietly. They would even exert their influence over the judiciary and armed forces as much as they can. They would try to put most of the opposition politicians behind the bar on fabricated corruption or other charges. They will bring out political rallies but would not allow the same to opposition parties. They arrange for fake degree/ title/ awards from such international organizations and agencies that no one knows about and then make wide publicity of the same. They hate those who happen to get the real honor. Instead of making the important investment in agriculture or industry they would go for prestigious structures and monuments and name them after their names. The dictators are very fond of naming everything by their name to leave a legacy of their so-called achievements. They also try to groom their children as apparent future leaders. Finally, by publishing and publicizing false propaganda, they even try to alter history so that the younger generations may never know the truth. In this article, we shall discuss a few of them.

Robert Mugabe (Rhodesia): Ever since the independence of the country, he has been their president. He is now 95 years old. He cannot leave even if he wants to. This is because those in the administration have been so corrupt that they are afraid of any regime change. They would not allow Mugabe to retire.

Bashar Al-Assad (Syria): He came to power after the death of his father. He proved to be a ruthless dictator – far worse than his father. For last ten years, the country has been witnessing the worst civil war. About 10% of the population has already died. More than 30% of the remaining population have left the country and taken refuge in other nations. It does not matter to him. He is still sitting tight on his throne.

Hun Sen (Cambodia): The country has regular elections but there is always one winner, and that is Mr. Hun Sen. There is no freedom of expression or human rights. Political activities are not allowed. Hun Sen awards all contracts directly. Even the ship registry is operated by a foreign businessman from abroad.

Moussavi (Uganda): After the departure of Idi Amin the people of Uganda thought they buried their history. But it was not to be so. Idi Amin was a crude dictator, but Moussavi is a refined dictator in the shape of a democratically elected government. So much time he is alive Uganda is not likely to see any regime change.

Sheikh Hasina (Bangladesh): Her father Sheikh Mujib lost his life trying to establish one party rule in Bangladesh. Sheikh Hasina is much wiser and cleverer. She is trying to achieve the same tactfully. The country has multi-party democracy by name, but it is gagged and controlled. She now presides over a government that was never elected by popular votes. The party had won majority seats even before a single vote was cast.

Nursultan Nazarbayev (Kazakhstan): He has been the president since the country gained full independence in 1989. He and his three daughters are world famous for their corruption. The president built a new capital for the country. The country could afford it because of its oil and gas resources.

Kim Jong-Un (DPRK, North Korea): He is known as the Supreme Leader of DPRK. His late father remains the President of DPRK. Kim Jong is a real threat to world peace. He killed his uncle by putting him in front of the artillery gun and then firing the gun. He is also believed to be behind the mysterious killing of his brother in Malaysia. Despite all the sanctions against his country, he is testing bombs and missiles now and then. DPRK has said to have developed missiles to hit the USA with a nuclear weapon.

Emomali Rahmon (Tajikistan): Another dictator who continues as the president though constitution allows only two terms. The excuse is that his first term was under the previous constitution. He has added a lot of titles to his name, and the newscaster has to read all that every time his name to be broadcast.

Gurbanguly Berdimukhamedov (Turkmenistan): The most colorful dictator. He arranges for a music competition, car race and many other events which he always wins.

Alexander Lukashenko (Belarus): Perhaps the last dictator in European soil. He does not tolerate any dissent. He deals with all of them most ruthlessly.

Madura (Venezuela): He is determined to consolidate all powers so that he can run Venezuela the way he wants. Quite some people already lost lives protesting against the government. There is hardly anything functioning. Inflation is perhaps highest in the world. Stores are empty.

Erdogan (Turkey): Those responsible for the coup attempt are to blame themselves for giving Erdogan a chance to become a full dictator. Erdogan was waiting for such an opportunity. He has put thousands behind bars. He is concentrating all powers to himself. Military bases have been opened in Somalia and Qatar.

There are several other dictators around the world, but I have mentioned just a few who became quite famous. One thing is common – they all think of themselves as indispensable as if the country would not survive without them.