Cultural and economic determinism of affirmative action in India 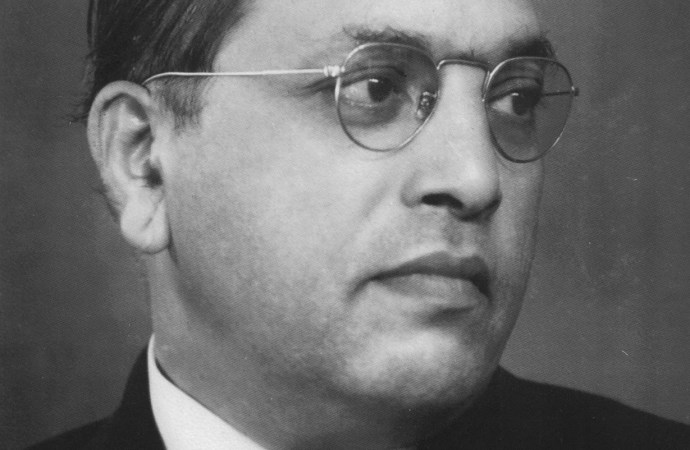 “….What is equal is to be treated equally and what is different is to be treated differently, namely proportionately to the factual difference. […] the principle of equality before the law does not mean the absolute equality, […] but it means the relative equality, namely the principle to treat equally what are equal and unequally what are unequal […] To treat unequal matters differently according to their inequality is not only permitted but required….” – Judge Tanaka, International Court of Justice.

It is common for a non-reserved category person in India to argue against the reservations of the Scheduled Castes in India. This article discusses the arguments for and against the reservation policy, or affirmative action, in the Constitution of India with regards to the Scheduled Castes (SC) population. It argues against the claim that affirmative action has been a failure in enhancing equality in India, and thus must be done away with (as popularly argued by many in India). This article also debunks myths regarding the meaning of ‘Caste’, while arguing that economic status is not the prime determinant for labeling a caste as depressed. The data on crime against scheduled castes points to the fact that the real disadvantage is structured against the castes at a cultural rather than an economic level. Even economically, the scheduled castes are at a disadvantageous position, contrary to what some may think. Evidence has been drawn primarily based on the data of education and literacy to show that affirmative action has in fact proven to be of benefit to the Scheduled Caste population in India.

There is a philosophical under-current from a policy perspective: in dealing with cultural issues, policy makers need to adopt an approach, which is flexible not uniform. Philosophical dispositions on the strategy for equality held by various leaders, such as Gandhi, Gora and Dr. Ambedkar, have been assessed. A single strategy may not be fit in dealing with policy decisions pertaining to cultural problems. In other words, different strategies for different situations to address the same caste-related problem has been argued for.

Extreme nationalists point towards the fact that reservation was supposedly a colonial legacy, hence must be done away with. The contention goes back to the argument that reservation for scheduled castes was part of the divide and rule policy of the British colonialists.

The changing view of the Indian polity towards affirmative action must be viewed with the background of the changing views of Mahatma Gandhi on issues of caste and untouchability. In 1920, Gandhi observed that “caste has saved Hinduism from disintegration.” This was the time when Gandhi was seen more of a Hindu leader who had just made a strategic alliance with the Muslim Leadership for the Non-Cooperation movement. Gradually, Gandhi got elevated to the position of a Nationalist who was aware of the economic aspirations of the masses. This culminated into the Dandi March and the Quit India Movement, of which Jawaharlal Nehru and other Congress leaders were also a part. In 1931, Gandhi observed, “I do not believe in caste in the modern sense. It is an excrescence and a handicap on progress…”

In mid-1930s Gandhi further revised his stand on caste. He stood for the Varna system, but not the caste system. It meant that a division of labor is accepted by Gandhi, but not the inhuman exploitation of labor. Nor there can be any cultural differentiation of people on the basis of their caste. Gandhi was well aware that making do with the religious narrative and related metaphors would mean essentially losing the psychological connect with the masses. He knew that the masses could be moved by religious metaphors. After all, an economic determinism in explaining the nature of society was still predominantly an elite view in India. Thus, in 1936, Gandhi commented “caste has nothing to do with religion. It is a custom whose origin I do not know [….] and varna [has] nothing to do with castes.”

Henceforth, Gandhi was of the belief that provision of separate electorates for the scheduled (formerly “untouchable”) castes, would separate the Hindu community. It would disturb the fabric of the Indian society. Gandhi still strongly believed in the cause of Hindu unity. By 1932 he and others in the Indian National Congress (INC) started viewing caste as different from religion. While Dr. Ambedkar viewed the depressed castes falling outside the gamut of Hinduism, Gandhi essentially viewed them as an inseparable part of the larger Indian society. There was a realization that the depressed castes had suffered injustices through the ages and it was necessary for a truly democratic nation to correct the wrongs of the past. Hence, reservations for castes were essential for development and unity of the nation, as opposed to reservations for religion. After-all Indian history had rulers and dynasties hailing from a multitude of religions.

Pointedly, while the middle class did not have enough Muslim representation at that period of history, the upper economic echelons of the society and the intelligentsia was well represented by members of various religions. The same however was not true in the case of castes. Nevertheless, there has been a constant debate on the issue of reservation, its applicability, and its tenure. Nonetheless, it was with the formal nod of the Indian political representatives of the INC that the reservation for castes got formulated.

The extreme nationalists forget the fact that the Constitutional Committee formed the Constitution of India on the principle of “take what-you-like, leave what-you-don’t”. Affirmative action for the depressed classes was surely a colonial legacy carried forward by the Government of India, but, not without a rationale. For some reason the extreme nationalists tend to lack faith in the ethos of the very people who framed the Constitution of India. Or perhaps it is a political attempt to tarnish each and every action and decision of the founding fathers of the Nation. Unfortunately, in the political and some academic circles, the electoral agenda looms over such disingenuous evaluation of history.

Another set of pundits attacking affirmative action are the socio-economically rational ones. It’s just that they are more essentialists than rationalists. These pundits point to the increasing economic wellbeing of certain groups among the scheduled castes (which renders them “undeserving” of any reservation). Or they harp that the benefits of reservation are not percolating down to the real beneficiaries; thus the purpose of reservation stands defeated.

Such arguments hook on to the “creamy layer concept”. They essentially argue that the benefitted individuals or groups belonging to the scheduled caste must be kept out the affirmative action policy. These critics refer to the Lokur Committee report which had recommended that certain castes/tribes be excluded from reservations.

Under the Indian Constitution, it is only the Parliament that can include or exclude from the list of sections of Scheduled Castes and Scheduled Tribes. Some have argued that certain castes within the Scheduled Castes are better off economically, educationally and politically. Hence, the list must be revised from time to time. However, doing so sooner than socially warranted, would seize the hopes of the broader scheduled caste community to improve their standards. It will send out a message to the masses that “if you reap the benefits of development, you will be dropped off the list” – which would essentially be tantamount to negative motivation for the depressed classes. In either case, the better-off ones of the community are not sizeable enough to be exempted from the benefits.

Once the sections of scheduled caste population begin to surpass the various parameters of prosperity, it would make sense to have such debates. Then, it would be necessary to discuss which caste needs to be excluded from the list and why. Otherwise, doing so in India, it is only premature. It will falsely tantamount those who have benefited from affirmative action but not yet solidified their position in the mainstream, even after generations. They will wrongly suffer in a battle they are not yet prepared to fight.

Studies have clearly found negative relationship between income inequality and intergenerational mobility. In other words, in countries like India where inequalities are great, inter-generational upward mobility, or mere stability, is exceptionally difficult. Even economically, the scheduled castes as a social group are significantly backward as compared to the other castes. In fact, as one moves up the economic strata, the representation of the scheduled caste population steadily diminishes because most of the scheduled caste population is kept, owing to social pressures, concentrated in the lower economic segments of the society. 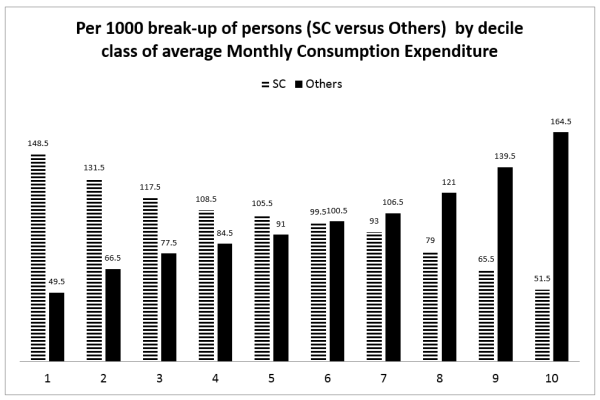 Affirmative action has been fruitful. Evidence shows the education situation has been improving for the scheduled caste population. This is reflected through the growing literacy at different levels. 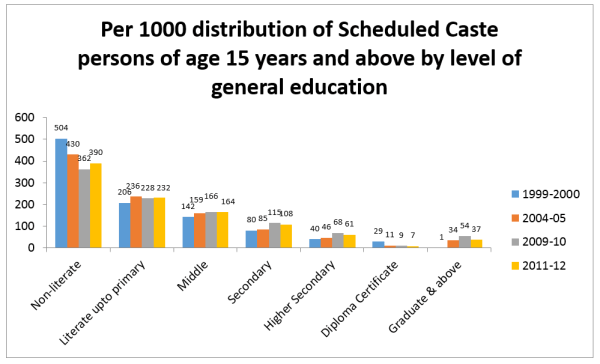 From 1999 to 2012 there has been a marked reduction of illiteracy among the scheduled castes (by 23%). For higher education, there is still a glass ceiling which will take more effort to breakthrough. At the school level, the dropout rates for scheduled caste population have significantly reduced in the decade following 2001. 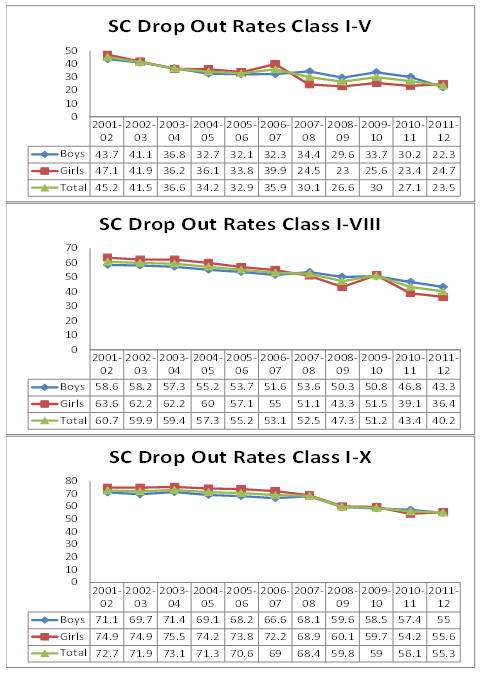 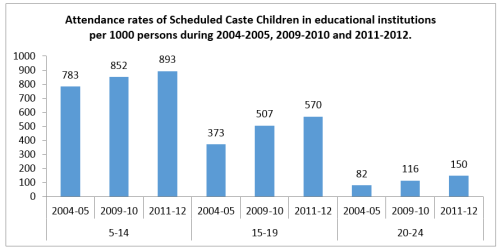 From 2004 to 2012, the number of households without a literate member have decreased across all social groups in both rural and urban India. The decrease is significantly more for scheduled groups compared to the rest. Given the data, is it the affirmative action policy that brought improvements in educational standards? The verdict is out: in affirmative.

To understand caste, the intricacies need to be viewed in cultural rather than economic terms. Mahatma Gandhi was well aware of these intricacies. He understood that the way to get rid of the caste problem in India is to work on cultural assimilation through active policy action. Gandhi wanted to bring about a unity in diversity. He, however, did not want to do away with labels. Gora, Gandhi’s intellectual polemicist, held that as long as there is such “diversity”, there can be no unity. He said “an attempt also might be made to discourage the use of labels of caste and creed which raise imaginary barriers between man and man. Not only should the practice of untouchability go, but the Harijan should not be allowed to continue a Harijan.”

How policy gurus are able to find a middle path between Gandhi and Gora is subject to much deliberation. Dealing with intangibles such as culture as opposed to tangibles such as economic measures poses real challenge. Achieving a middle path would not mean achieving a middle position between Gandhi and Gora. It would mean adopting different positions and systems covering a spectrum of stratagem. In simple words, at times certain special treatment would be required to benefit the society. Other times no special treatment should be given, neither should there be any labels. In still other situations, a strict mixed scheme should be formulated. For example, in education sector affirmative action has worked in favor of the scheduled castes. In the educational system in India, a middle path between Gandhi and Gora has been setup. While there are labels in terms of reservations, there is no separation in the delivery of education.

The future step would be to setup special courts to deal with the issues of scheduled castes. They will give suffering groups disproportionately greater access to justice. In the economic sphere, it would be tenable for the government to promote large-scale entrepreneurship development programs, involving community participation of scheduled groups. Such dedicated institutes to inculcate managerial, technical and vocational skills in scheduled caste population will usher greater economic development. All in all, dealing with cultural issues, vis-à-vis schedules castes, needs covering a spectrum of strategies to promote equality.