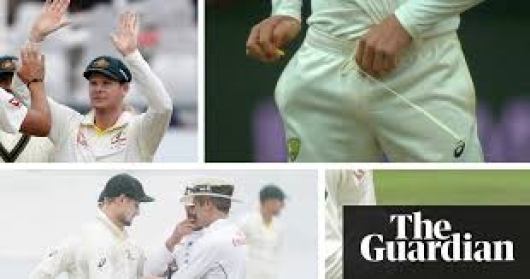 Cricket has never been a legitimate sport as it allows all sorts of wrongdoing, illegal operations, silently. Cricket mafias who regulate cricket match outcomes do not come to light.

As politicians and officials make money extra money illegally and immorally, the cricketers also do the same with state backing.

Ball tempering cases come up regularly, but match-fixing by the team concerned have never been brought to the public domain.

Australian cricketers have been caught tampering with the balls to get wickets against the South Africans.

Most of Indian IPL payers are well versed with ball tempering, but their cameras do not expose them and go into details and help the IPL bosses and players continue to cheat and mint money.

In fact, cricket has never been a sport of gentlemen. Cricketers are great frauds, match fixings, ball tempering, pitch tampering, toss tampering, runouts, seeking 100s and 50s as the ICC and other cricket boards impose ruled to help the batboys get easy runs in 6s, 4s, and 2s, etc.

Interestingly, the cricket boards instruct the bowlers to try to take wickets without targeting the stumps or trying for LBW. LBW is the easiest method to get wickets but bowlers not do that but only offers many runs. When bowlers lose patience and hopes for a wicket, they go for ball tampering so that a wicket falls.

That to say, the ICC must revise the cricket rules to make the cricket and pitch neutral and not anti-bowler.
Cricket rules starting from pitch-making pamper the batboys and force the bowlers’ toil without successes in taking wickets but only offer too many runs. Bowlers struggle to take wickets as batboys are empowered to make merry at the crease.

It is a big joke that in 20/20 the ICC rules allow 11 batboys to play but in the real sense only five or six batboys should be allowed to bat. This is because they want the batboys to get enough runs.

Bowlers are encouraged by cricket boards and ICC to offer too many runs to bowlers, trouble not the poor but heroic batboys by targeting their stumps, but they are safe and shielded by cricket boards, mafias and corporate lords who sponsor matches.

Rarely close scrutinies take place about forgery and fraudulence in cricket matches and punish the bowlers if UK and India are keen to punish those teams that are better than themselves.

Pakistan has been the target of Indo UK duo, and their best bowlers have been punished.

Since cricket is meant for the pure entertainment of the rich fellows as the bowlers are paid to offer 100s and 50s to batboys boy rotation so that they could garner national award and swindle wealth through various gimmicks like advertisements.

If the cricket boards have decided to get national awards for a certain batboy, they would also arrange to fix matches to help the batboys concerned get special 100s, etc.

In these bogus record generations, even the governments are involved.

The latest ball tampering by a captain himself brings to light the nature of bogus records and the secret deals taking place behind the scone. Australian captain Smith and Vice Captain Warner have resigned, and the government has initiated investigations – maybe as a pure gimmick.

Ball tampering is a criminal by intention and action in a field known as the Gentlemen’s sport. But the ICC has barred Australian captain Smith just for a match as punishment for ball tampering operations fooling the general public who buy tickets to watch the entertainment. Keeping the players out of the field for one match allows enough rest for players, and that is not any punishment at all.

In fact, Smith should have been barred for at least five years, if not for life, so that other bowlers/players would learn a good lesson and cricket could become less hazardous though the outcomes can never be genuine and truthful.
How to end official match fixings by the cricket boards for special runs for batboys? How can you forgive the official match fixings for any purpose?
In fact, the official match-fixing is the cause of all fixings and ball tampering in cricketism. IPL type joint cricket exercises spoil whatever credibility cricket could claim.
Match-fixing, ball tampering, fake records are normal in cricket, and they are being promoted by the cricket boards and ICC to make cricket look interesting, thrilling and extra profitable. Profits are shared by all concerned including the governments, boards, players and mafia guys.

That makes batboys the favorite beneficiaries on the cricket field for big runs in 6s and 4s and big awards and cash from the regime.