Covid-19 and Competition for Influence in South Asia 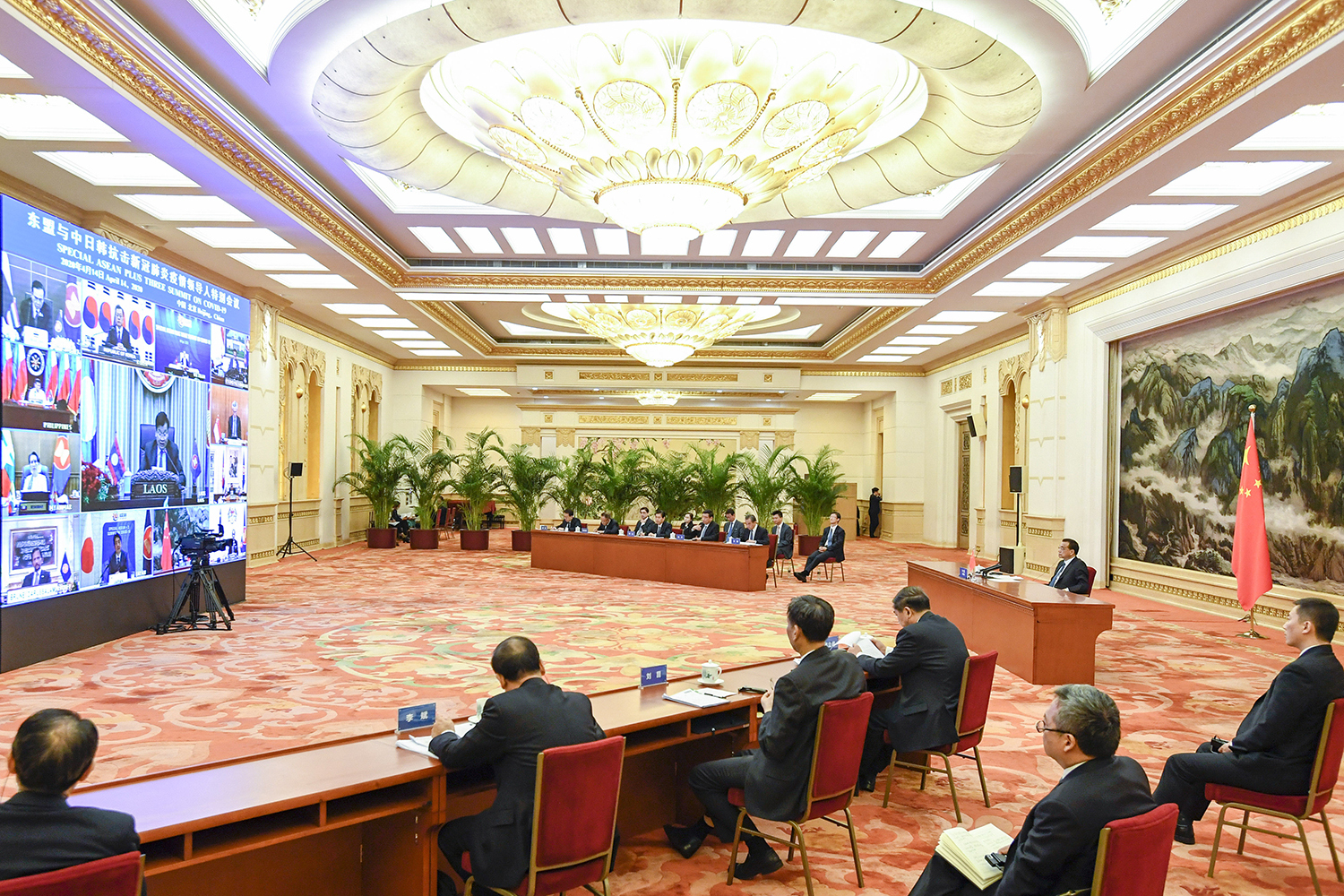 Chinese Premier Li Keqiang attends a special summit of the Association of Southeast Asian Nations on COVID-19 via video link in Beijing on April 14. XINHUA/GAO JIE VIA GETTY IMAGES

by Nilanthi Samaranayake 6 May 2020

Nilanthi Samaranayake (CNA) explains why assistance to the smaller South Asian countries will be important for showing U.S. interest in this region and demonstrating the superiority of the United States’ economic and governance model in a new era of great-power competition.

As Covid-19 overwhelms healthcare systems and paralyzes economies across Western Europe and the United States, concern is growing about the potentially devastating impact of the virus in the developing world. Countries in South Asia are especially vulnerable because of their high population density and insufficient government resources.

South Asia has a population of nearly two billion people. India and Pakistan have long dominated attention as the largest countries in the region and as nuclear weapons states. Both have instituted stringent measures to attempt to limit the spread of the virus. India is currently under a national lockdown in which air, bus, and train travel have been suspended. Partly as a result of these measures, there are concerns about disruptions to supply chains and access to food staples. Meanwhile, Pakistan is also under lockdown and is launching its largest social welfare effort ever at $1 billion.

However, what impact is the Covid-19 pandemic having on the smaller South Asian (SSA) countries, namely Bangladesh, Nepal, Sri Lanka, Bhutan, and Maldives?[1] While the official estimates of cases are low at present, the economic costs are already deep. According to the World Bank, four of the five countries are middle-income economies, while Nepal is classified as low-income. Most have rising levels of domestic and external debt and generally low FDI levels. Their economies are thus highly dependent on external sources of income such as textile exports. These countries have also experienced severe impacts on tourism, an industry that helps fuel the economies of Maldives, Sri Lanka, Nepal, and Bhutan. Finally, they are seeing losses in remittances from workers in the Middle East that contribute to their national economies.

Why should the United States and other major powers care about SSA countries? First, their emerging economies present opportunities to extend the benefits of economic development and invest in supply chains and increased connectivity for goods and services. Second, these countries are now all democracies that have conducted national elections but are still susceptible, in varying degrees, to authoritarianism. Finally, major powers see them as increasingly contested for influence by China, an emerging regional and global power.[2] As the U.S. National Security Strategy focuses on a new era of great-power competition with China, how the United States responds to nontraditional security challenges in contested regions will have significant implications for traditional security concerns and regional stability.

What does the early impact of Covid-19 on SSA countries mean for the strategic environment in South Asia? First, India, as the dominant country in the region and a major defense partner of the United States, is eager to play a leadership role in relief efforts toward its smaller neighbors. As part of his Neighbourhood First policy, Prime Minister Narendra Modi recently assembled counterparts using the South Asian Association for Regional Cooperation (SAARC) forum, at which he proposed a SAARC emergency fund and offered $10 million in aid. For their part, SSA countries are also contributing to this fund with donations to nearly match India’s contribution collectively.

Second, beyond this multilateral forum, India has offered crisis response assistance to SSA countries. It has conducted operations to evacuate nationals overseas from Bangladesh, Maldives, Sri Lanka, and Nepal using a combination of Indian Air Force and commercial aircraft. In Maldives, India has also mobilized military relief, set up a laboratory for testing Covid-19 patients, and delivered critical medicine and hospital supplies. The Indian Air Force has positioned medical supplies near the border with Nepal, while New Delhi has promised Bhutan uninterrupted supplies of medicine, food, and fuel, despite the lockdowns and closed borders.[3] Finally, six Indian Navy ships are reportedly on standby to deliver crisis relief to neighboring countries when needed.[4]

Providing this type of regional assistance is not new for India. After the tsunami in December 2004, India delivered disaster relief to Sri Lanka and Maldives, as well as Indonesia, even as it conducted relief operations domestically.[5] Yet the geopolitical stakes are different fifteen years later. The rise of China in the Indo-Pacific and beyond has elevated the threat perceptions of India and its strategic partners, including the United States.

Third, China’s assistance to SSA countries during the pandemic has not been significant to date. It has been limited to the delivery of small batches of testing kits, personal protective equipment, and other medical supplies by government agencies, state-owned enterprises and businesses, and foundations. Moreover, concerns have been raised about the quality of some of these supplies. Nepal, for example, is not using testing kits that were purchased (rather than donated) from China due to concerns about their accuracy.[6]

However, such assistance may not turn out to be China’s most valuable response to the crisis in South Asia. As discussed earlier, SSA countries were facing financial problems that have now been exacerbated by the impact of the pandemic on national economies and global supply chains. Already, Sri Lanka has signed a $500 million loan agreement with China, apparently to mitigate the economic effects. The loan helps augment the country’s low foreign exchange reserves, an ongoing issue in its graduation to middle-income status, and within this category from lower to upper middle-income status. In fact, the lease of the controversial port in Hambantota to a Chinese-majority joint venture was driven largely by Sri Lanka’s need for foreign exchange reserves rather than being a debt-for-equity swap, as is often believed.[7]

While it is important not to read too much into this development, such a loan could represent a different type of crisis relief from China that would be as welcome to SSA countries as the provision of medical supplies and services. The four middle-income countries are seeing their access to concessional lending dry up and have not yet successfully or sustainably updated their debt management strategies.

What should the United States do to advance its interests in South Asia and broader Indo-Pacific strategy through its Covid-19 response? First, Washington has so far been proactive in its assistance to Bangladesh, Nepal, and Sri Lanka (providing $3.4 million, $1.8 million, and $1.3 million in health assistance, respectively).[8] Yet the United States will need to continue to modernize the development finance tools outlined in its National Security Strategy. An important outcome of this effort has been the creation of the U.S. International Development Finance Corporation. But it remains to be seen how Washington will deploy this new agency as a tool for demonstrating U.S. financial leadership to developing nations affected by the virus beyond what the State Department has already pledged in terms of health assistance.

Second, although the United States will need to rely on its major partner in the region—India—to continue to provide assistance to neighboring countries, it should encourage extraregional allies such as Japan, Australia, France, and the United Kingdom to function as an additional source of aid. SSA countries are highly sensitive to threats to their sovereignty and prefer not to depend on any one country for external assistance, whether China or the United States. Washington cannot expect to match the sheer size of Beijing’s financial assistance; however, it can leverage its network of alliance and strategic partners, as well as its leading role in multilateral development banks, to catalyze an effective response to the pandemic.

As the Covid-19 crisis continues to wreak havoc on public health and the global economy, Washington should maintain its commitment to South Asia as part of its broader Indo-Pacific strategy. Assistance to the smaller countries in this region will be important for showing U.S. interest in this increasingly contested bloc and attention to the larger strategic issue at stake: demonstrating the superiority of the United States’ economic and governance model in a new era of great-power competition.

Nilanthi Samaranayake is the Director of the Strategy and Policy Analysis Program at CNA, a nonprofit research organization in Arlington, Virginia. The views expressed are solely those of the author and not of any organization with which she is affiliated.

[1] These five countries are referred to as smaller South Asian countries not only based on metrics such as population or land area but also due to their asymmetric relationship with India.

The article was originally published in the National Bureau of Asian Research on April 15, 2020 and re-published here with the permission of the author.