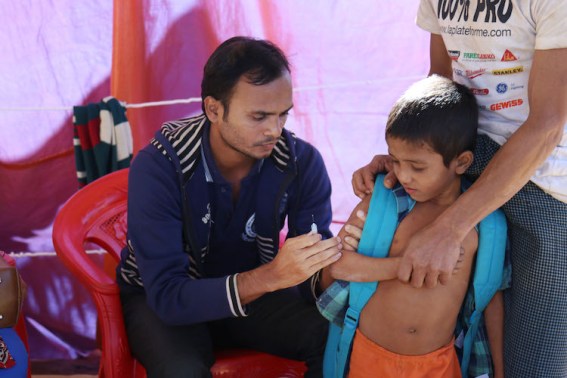 A medical officer immunizes a Rohingya refugee child at Balukhali refugee camp in Cox’s Bazar in Bangladesh on Dec. 4, 2017. (Photo by Stephan Uttom/ucanews.com)

Aid groups have launched the second phase of a cholera vaccination campaign for the up to one million Rohingya refugees in Bangladesh amid warnings of diseases and natural calamities in the monsoon season.

The week-long oral vaccination of refugees and host communities started May 6. This is follow-up immunization for the persecuted Muslim minority after a similar campaign in October-November 2017 saw about 900,000 refugees immunized in up to 12 settlements in Cox’s Bazar.

“Considering the water and sanitation conditions in the overcrowded camps and the increased risk of disease outbreaks in the monsoon season, the health sector is taking all possible measures to prevent cholera and other waterborne and vector-borne diseases,” said Dr. Bardan Jung Rana, the World Health Organization representative in Bangladesh.

Some 245 mobile medical teams are immunizing all people over the age of a year old in refugee camps and host communities in Ukhiya and Teknaf subdistricts.

Bangladesh’s Ministry of Health and Family Welfare, with support from the World Health Organization, UNICEF and other partner aid agencies, is supporting the campaign.

Despite vigilance, disease outbreaks in camps are possible, experts warn.

“The camps are overcrowded and unsanitary as refugees live and cook very close to their toilets. During the monsoon, flooding would spark the possibility of a cholera outbreak as well as other waterborne diseases,” Dr. Wasim Firuz, a medical officer with French medical charity Doctors Without Borders, told ucanews.com. 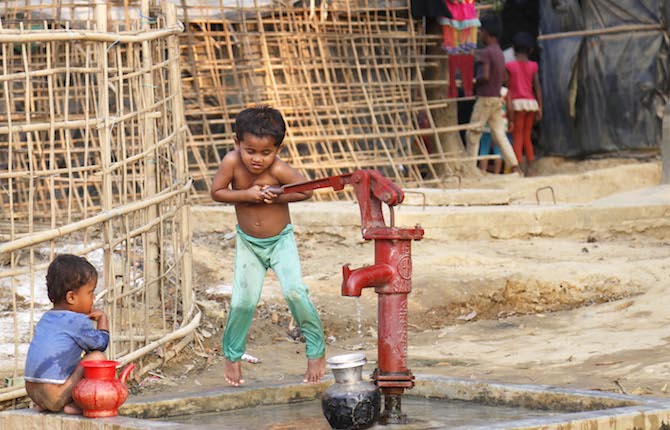 Including the host community in the vaccination program is a timely decision, said Firuz, who has been in the camps for six months.

People need to get vaccines for hepatitis, adequate training on hygiene at their residences and neonatal care, Firuz said.

“We think 50,000 children will be born in the camps this year, so that’s a serious concern for us,” he added.

Abul Hasan, 40, a Rohingya refugee who came to Bangladesh in August 2017 with his 10-member family, has been immunized with all family members.

“We were vaccinated for the second time on May 7. We are glad that Bangladesh’s government and NGOs are concerned about our well-being,” Hasan, from Balukhali refugee camp, told ucanews.com.

Dr. Richard Brennan, director of emergency operations at the World Health Organization, warned of risks from other diseases, natural hazards and a serious funding shortage.

“We’re not out of the woods yet. We are looking down the barrel of the monsoon season, with the inherent risk of flooding and landslides, as well as the cyclone season,” he told journalists in Geneva on May 8.

Brennan said US$950 million is required to help the refugees but only around 16 per cent of this amount has been provided. Resources are even scarcer for healthcare, with only 6.3 percent of funding needs met, he noted.