CHANGING DYNAMICS OF INDIAN OCEAN AND NAVAL DIPLOMACY OF PAKISTAN 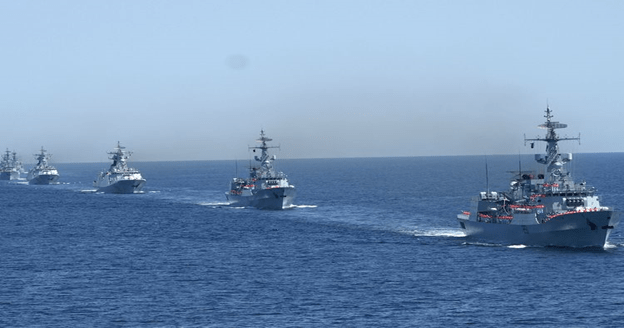 Pakistan being a littoral state, imported twenty million tons of oil through the sea. Oil fulfills thirty-two percent of energy necessity and thirty-eight of power generation. In this context, therefore, the maintenance and modernization of Pakistan’s maritime security are like the human body’s backbone. Moreover, maritime security is the need of time for Pakistan and all other countries whose prosperity and progress are strongly linked with the seas. Traditional and non-traditional challenges push the sea-based economy countries to go for collaborative responses through naval diplomacy.

AMAN is one of the few international naval exercises started in 2007 as per the Pakistan navy initiative to protect the maritime domain, especially the seven choke points located in the Indian ocean. Pakistan Fleet Commander Rear Admiral Naveed Ashraf announced during a media briefing that Pakistan would host AMAN-2021 in the North Arabian Sea with effect from 11 to 16 February. As per briefing, about 45 countries are joining in this drill, which includes China, Russia, the US, and other countries.

In the wake of resurging China, coupled with her economic ambitions, forced the US and India to knot ties. The US is fully supporting India to expand its naval upsurging and to contain China. Through this exercise, Pakistan is acting as a strategic bridge between China, the US, and India to mitigate and resolve conflict in the age of naval competition. Pakistan wouldn’t join in wholeheartedly on one side or the other.

The slogan of naval drill “together for peace” shows the reality that this exercise has no political intimidation. It doesn’t aim to target any specific country regardless of ensuring peace and security in the region. It aims to counter unconventional challenges like piracy, trafficking, terrorism, natural disaster, etc., in the Indian ocean, especially in the Red Sea, Gulf of Aden, Arabian Sea, Persian Gulf, and the Somalia Basin. In the contemporary arena, the intensity of transnational crimes has lessened in the region due to naval assemblies like AMAN.

This exercise will help Pakistan to achieve its ambitions of transforming its navy into a blue-water navy as it is busy procuring its surface system, subsurface system, airborne and submarine system to boost up its operational, strategic, and tactical capabilities to play a constructive role into Indian ocean especially in the northern Arabian sea.

Pakistan shares a pattern of enmity with India since its independence in 1949. Through various naval drills, India is trying to isolate Pakistan from the international community. With the functioning of AMAN in 2007, Pakistan is emerging as an epicenter of all collaborative efforts for ensuring peace and security in the region while rejecting India’s propaganda.

Russia’s entry into AMAN-2021 with three naval fleets also showcases that in the twenty-first century, Russia is more tilting towards Pakistan and moving much away from India. It is expected that there would be more collaboration between Pakistan and Russia in the maritime sector. Moreover, it is also to note that after Russia intervened in Georgia in 2008 and Ukraine in 2014, Russia is more tilting towards Asia, especially towards China, in changing geopolitics.

In a nutshell, Pakistan being a blue-economy country putting forth much focus on its maritime domain.  Through the AMAN series, Pakistan is not only countering its traditional challenges, still, it is also collaborating with nearly 45 nations of the world to counter non-traditional threats emanating from the sea.