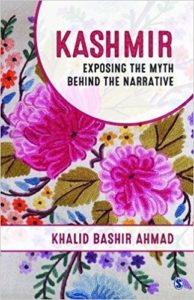 The great enemy of the truth is very often not the lie, deliberate, contrived and dishonest, but the myth, persistent, persuasive and unrealistic (John Kennedy). A myth is a story that survives till it is debunked and during the period of its currency, it is more potent and powerful than history. The myth is what we call other people’s religion and like a war, straightforward to start but difficult to bring to an end. It is this difficult job which author Khalid Bashir has accomplished through his book ‘Kashmir-Exposing the myths behind the narratives.’

When a myth-busting book hits stands, questions and doubts are often raised about the intentions, tools, and methodology used by the author to contest well-established myths in the form of stories and legends as both the manufactures and consumers of such myths are not ready to accept the new but factual positions. In such circumstances, the author is put to extra challenges of acceptability and criticism (often by those who haven’t even read the book), especially at initial stages. Khalid Bashir has been no exception to this initial tirade. The last time a good myth-busting book was published was 2015 when Catherine A. Epstein’s book ‘Nazi Germany: Confronting the Myths’ was published. It faced the same response but ultimately held the ground and today, after less than three years is regarded as a masterpiece on the subject.

In the Indian subcontinent, Brahman Hindu Historians, have unfortunately entwined religion and history, producing what one may call a mythology based on Sanskrit textual sources. Over a period, it has been corrupted and falsified to such an extent, particularly after partition that one particular narrative has gained pre-eminence -that Hindus had once a glorious past which was destroyed by Muslim conquerors-. For such historians having their way,  Taj Mahal, the masterpiece of Muslim architecture, built by Mughal emperor Shahjahan in memory of his beloved wife Mumtaz Mahal is actually “Tejo Mahalay, a temple dedicated to Hindu deity Lord Shiva.(Hindu Historian P.N.Oak in his book  Taj Mahal: The True Story). Similarly, these historians would like us to believe that world’s largest minaret in Delhi, Qutab Minar was not built by Qutab din Aibek but rather, it was a Hindu structure known as Dhwaja Sthambha or Vishnu Sthambha.  As famous British historian William Dalrymple notes, Hindu supremacists “have found it hard to believe that such a masterpiece was built by the same Muslims they despised.”

Khalid Bashir’s Kashmir: Exposing the Myth behind the Narrative is an excellent book which puts various issues about Kashmir’s history in proper perspective. It exposes a particular interest or class of interests behind various such issues. It is common knowledge that post-1990, many new narratives have been created with a special interest behind these. Since myths have necessarily to be created to give currency to such narratives, the author exposes such myths with meticulous research, references, and cross-references. Be it the movement of Kashmiris to obtain their political and economic rights during Dogra rule or the migration of Pandits in 1990; the author lays bare the facts to challenge the myths woven around these events to bring the truth and reality to surface.

Khalid’s book is divided into nine chapters. Each chapter is seductive and keeps the reader engrossed with the author’s systematic demolition of the myths and falsehoods created and promoted by biased writers and historians. One of the chapters of Khalid’s book ‘Malice’ revolves around tales of persecution by Muslim rulers woven by Kashmiri pundits since the time of the advent of Islam. An instance is that of Sultan Sikander who has been branded as an intolerant tyrant king and an idol breaker (But shikan) by Pandit historians. The fact is that Sultan Sikandar was a benevolent and secular ruler who donated state land as an endowment to many temples and installed idols in several of them. One of the instances is recorded in history, when he installed a Shiva lingam in Ganesh temple, popularly known as Ganpatyar Mandir, only half a kilometer away from the famous Lal Chowk. In 1990, Jagmohan the then Governor got the said murti   shifted from the Ganpatyar Mandir to Zeshta Devi Mandir in  the vicinity of Raj Bhawan after defacement of the important inscription in Pali language which had been documented by none else than famous researcher and former head of the Department of Central Asian Studies, University of Kashmir, GN Bhan, himself a Kashmiri Hindu.(Ajaz Mir-Poineer).Incidentally, it may be mentioned that it was suh Bhat, a Kashmiri Pandit and Prime Minister during  Sultan Sikander’s  rule, who embraced Islam and did damage some temples to quell anger and rebellion within his community.

One finds a stark similarity in this maligning game of Muslim rulers by Brahmin historians in India. Take for instance Mughal Emperor Aurangzeb. Of all the Muslim rulers who ruled vast territories of India from 712 to 1857 CE, probably no one has received as much condemnation from Brahmin writers as Aurangzeb who was, otherwise one of the pious, scholarly,  liberal, tolerant and competent rulers of India. Fortunately, of late few Hindu writers have come out in the open to dispute these falsehoods and rectify the historical wrongs. But a major section of  Indian Hindu society has become so intolerant that it didn’t spare even historically acknowledged the most secular Mogul emperor, ‘Akbar the Great’ whose name has been erased from the streets of Delhi recently by rightwing Hindu Government. Similarly, the name of Mugalsarai Railway station in UP has been changed to ‘Deen Dyal Upadhyay Station.’

In the chapter ‘Migration,’ the author has established beyond doubt the forces behind the migration of Pandits in 1990. It should serve as an eye-opener for our Indian friends who are continuously fighting the truth to malign and demonize Kashmiri Muslims.

In the chapter ‘Titled Media,’ the author establishes how Indian media in Kashmir in the past, mostly manned by Kashmiri Pandits, has been partial and biased towards Kashmir in tune with the Indian interests. It has been in service of lies and half-truths 24X7.With the passage of time, Kashmiri pundits have been replaced by jingoistic and ultra-patriotic journalists employed  by Indian corporates,  who in the name of covering the news from Kashmir,  cover up everything but the reality.

Not that the book is free from errors. For instance- Number of persons martyred on July 13, 1931, incident has been stated to be 22 instead of well documented 23(Kashmir Ki Tehreeki Azadi-Peer Muhammad Afzal Makhdoomi-page 74). Similarly, the personal assistant of Nehru has been named as Dwaraka Nath Dhar instead of Kachru. But such errors hardly affect the utility of the book.

This book is well researched with a lot of hard work has gone into it. It has a ring of truth, and its contents deserve to be well known. It is a valuable addition to Kashmir literature alongside Mirdul Rai’s ‘Hindu rulers-Muslim subjects’ and Chiterlekha Zutshi’s ‘Language of belonging and Kashmir’s contested past.’ Undoubtedly this book will go a long way in correcting the one-sided and false narratives on Kashmir built over the years. The book needed to be written and now needs to be read

Tail Piece: In a history-making, it is said that until the lions have their historians, tales of the hunt shall always glorify the hunters. , Khalid Bashir Ahmad has made a great contribution to Kashmir’s existing literature demystifying the mythical but traditional narrative about Kashmir. A true story and must read for anyone interested in the history of Kashmir.