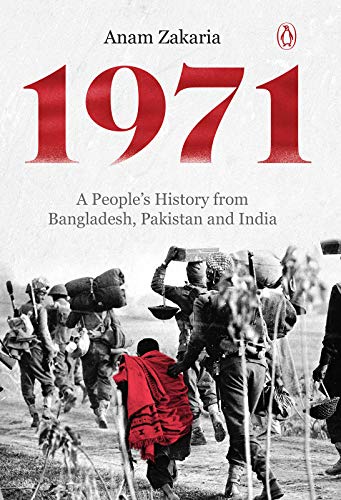 1971: A People’s History from Bangladesh, Pakistan and India, by Anam Zakaria, Penguin Random House India, Haryana, India 2019, Paperback, 402 pages, $14.95. ISBN: 947-0-143-45403-8
By Arnold Zeitlin
I first visited Dacca, as the capital city of provincial East Pakistan was then spelled, in December 1969 as the first resident Associated Press reporter assigned to cover Pakistan. Previously, AP had covered Pakistan news through local, part-time stringers or reporters sent from New Delhi, India, an arrangement that made AP clients in both Pakistan and India unhappy.
I found myself in the midst of a state of emergency imposed by the province’s military governor, Vice Admiral S.M. Ahsan. It seemed Bangla-speaking Bengali Muslims were murdering Urdu-speaking Bihari Muslims and vice versa. The Biharis were Muslims who had fled India, mostly from the state of Bihar, at partition in 1947 for the supposed safety of Pakistan’s nearby eastern province. The emergency illuminated the tensions gradually escalating between the Bengalis in the east and not only Biharis but the Urdu culture of the western provinces.
Heavily influenced by my previous AP assignment: covering the civil war in Nigeria provoked by the attempt of Ibo tribesmen in the country’s oil-rich eastern province to succeed as a country called Biafra, I forecast in my first long dispatch from Dacca that East Pakistan would be the next Biafra. My boss, the AP foreign editor based in New York, shot back a query: Since the Bengali-majority east and Urdu-speaking west wing of Pakistan were separated by a thousand miles of India, how were they to get at one another?
I responded that I didn’t know how they would do it, but that they would find a way.
And they did, as Anam Zakaria discovers in considerable detail in her examination of the year 1971, during which East Pakistan emerged as independent Bangladesh.
Zakaria, a Toronto-based Pakistani writer who specializes in oral history, says the book “began as a personal quest to understand my own history….the war…left many wounds festering, and the relations within and between the three countries are still cast under the shadows of 1971….” She realizes her school girl lessons in Pakistan schools left her with little knowledge about Bangladesh.
Zakaria avoids detailing the events that led to war and independence. She also avoids interviewing leadership figures on all sides, allowing ordinary people to speak.
In Pakistan, she interviews school children who have no idea of the significance of 1971, westerners who fled East Pakistan, and Bengalis, many of whom were born in the west or lived most of their lives there and who are denied citizenship because of their ethnicity and the language they speak. She finds it difficult as a Pakistani to get a visa to Bangladesh but she manages a two-week visit which she spends mostly in the area around the city of Khulna. She finds Bangladeshi school children who initially regard her,  the first Pakistani they have met, as almost an alien creature, then ask for her autograph. She interviews Bengali Muslims, Bengali Hindus and Bihari Muslims, all with ghastly stories of husbands, sons and fathers forced from their homes and murdered and of other atrocities. She visits museums that perpetuate the stories of Pakistan Army killings. Biharis are condemned to life in refugee camps in Bangladesh because they are still regarded years after the civil war as pro-Pakistan but are unwanted in Pakistan. These are long well-known stories; they bear repeating.
She is most effective in a chapter titled My Truth, Your Truth discussing the games all sides play in writing history in the texts their children read.  Students in Pakistan’s government schools are taught the unfounded assertion that unnamed Hindu teachers in East Pakistan misled students and promoted a breakup of Pakistan, a goal since partition, they are told, of a Hindu India. The Pakistan Army crackdown in March 1971 is justified to their students by the murders of non-Bengalis by Bengali rioters in that month. Left ignored are the murders of Bengali Muslims and Hindus as well as the political, economic and social issues leading to the country’s breakup. As for the war, the Pakistani version is that it lost to India; the creation of Bangladesh was a minor byproduct.
In India, the emergence of Bangladesh is a great victory for the Indian Army’s humanitarian support of oppressed Bengalis as well as for the then-prime minister Indira Gandhi, although her role may be diminished under the rule of Narendra Modi’s BJP party.
In Bangladesh, the prime minister, Sheikh Hasina, has weaponized history as she succeeds in establishing a one-party Awami League state where her assassinated father, Sheikh Mujibur Rahman, failed with his single-party BaKSAL scheme that eventually became a factor in his death. She has created a heroic myth about her father, although the honorific titles by which he is known, Father of the Nation and Bangabandhu (friend if Bengal) are justified by his leadership to  independence,  Mujib’s reputation is sacrosanct as is the assertion that three million perished during the nine-month civil war, a figure that is otherwise the subject of critical controversy. .
When Hasna’s rival Khaleda Zia, was in power as prime minister for two five-year terms as leader of the Bangladesh National Party (BNP), she, too, used history as a weapon, She promoted her assassinated husband, former president Ziaur Rahman, as the individual who proclaimed Bangladesh independence. Sheik Mujib’s role was diminished if not wiped out in history texts.
Zakaria’s accounts have value as a reminder of the intolerance and outright hatred that exists in among the largest states of South Asia and that serves as a barrier to development and cooperation among what could be great nations.