Governments must not mislead the public. Bangladesh finance minister Mostofa  Kamal’s statement that per capita foreign debt amounts to about taka 25,000 was a half truth.

The minister should have added how much the per capita international debt is, and, rounded up the data to let the people know how much each of the country folk was burdened with the cumulative volume of national debt.

Cumulative national debt of Bangladesh has hit the dizzying height of almost US$150b; inclusive of the latest borrowings within and outside the country. This amounts to almost 50 percent of the GDP.

The GDP, on the other hand, had dipped from over 8 percent in 2019 to 3.8 percent in 2020. Reflected accurately, the cumulative national debt could be more than 50 percent of the GDP.

In many developed nations, debt-GDP ration is much higher. The factors that matter most are the sustainability of an economy in keeping investment, employment, production, and exporting on the right track.

Bangladesh’s volume of investment is shrinking by the click of the clock. From over 30 percent of the GDP in 2019, it had dropped by another 1.5 percent in 2020.

Amidst reduced FDI and private investment, and a paltry 8 percent of the GDP contribution stemming from public investment, the whopping gap between the debt-GDP and the investment – GDP ratios is the main concern.

Will the situation get better once the pandemic battering subsides? Not likely.

The three most fundamentals of the Bangladesh economy are remittance, export, and the volume of consumer spending. The first two are external-dependent, and shrinking. The last one, consumer spending, is getting even worse amidst 60 percent of the able workers having either been relegated to lower income threshold, or rendered outright unemployed.

To revive the economy, investment — both private and public — is most needed. That comes with a caveat: opportunity to borrow. The higher gets the debt-GDP ratio, borrowing from global outlets will shrink further due to the country’s degraded credit rating.

Domestically, banks and financial institutions are defaulting in paying off the depositors, according to media reports.

Even the public owned Investment Corporation of Bangladesh (ICB) can’t pay back the deposits of foreign and domestic companies. Bangladesh Petroleum Corporation (BPC) is one of such victims, as are the BTC and many scheduled banks.

The money crisis has been exacerbated further by the corrupt private corporations emerging as leasing and holding entities. The 3,000 crores taka swindling by the PK Halder of the People’s’ leasing is just the tip of the iceberg.

As many banks too invested in those fake entities to get higher margins of profit and interest, an estimated $80b equivalent of taka is considered already lost.

The hype that banks are sitting on idle liquid is hence a myth, and, the money to invest by both the government and the private enterprisers is very much in short supply.

The quintessential trick to overcome that ‘end of the cliff syndrome’ by printing more money will lead to a kind of hyper inflation that could destroy the Bangladesh economy irretrievably. 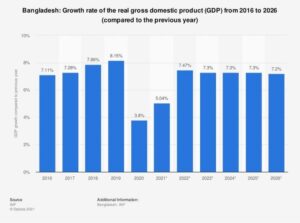