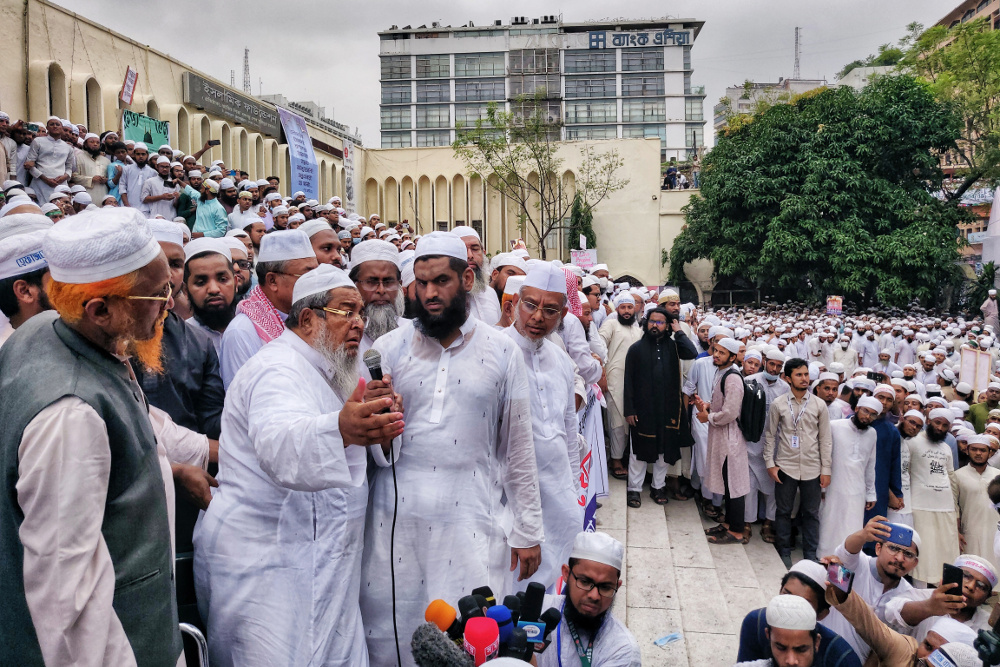 Bangladesh’s most influential faith-based organization, Hefazat-e-Islam, is likely to become more hardline and take an even stronger anti-government stance after a pro-opposition faction recently took control of the group, analysts told BenarNews.

Amid infighting with a faction allied with the prime minister’s Awami League, Hefazat selected Junayed Babunagari as its emir, or leader, on Nov. 15. He is a supporter of the opposition Bangladesh Nationalist Party (BNP) and its ally, the conservative religion-based Jamaat-e-Islami (JI) party, which advocates for sharia rule in the South Asian nation.

This pro-opposition group is now the stronger of the two Hefazat factions, said K.M. Mohiuddin, a government and politics professor at Dhaka’s Jahangirnagar University.

“Ultimately, the pro-BNP group has taken over the leadership of Hefazat,” Mohiuddin told BenarNews.

He was referring to how the organization had revamped its central committee, packing it with those who support Babunagari and who were the force behind last month’s massive protests against the French president for his defense of satirical cartoons of the Prophet Muhammad.

Many Muslims viewed them as offensive and blasphemous, but President Emmanuel Macron defended the cartoons after a French school teacher was murdered for showing the images to his class as part of a lesson.

“The pro-BNP lobby is now stronger. This group was earlier cornered, as the ruling Awami League had successfully appeased Ahmed Shafi and his son,” Mohiuddin said, referring to Hefazat’s recently deceased leader, Ahmad Shafi, and his son Anas Madani, who was left out of the organization’s new central committee.

Babunagari’s faction has the upper hand and could lead government of Prime Minister Sheikh Hasina to make concessions to the hardline group, according to Imtiaz Mahmood, a Supreme Court lawyer and former pro-Left activist.

“This is obvious in the government’s silence over Hefazat’s demand on the statue of the country’s founding father, Sheikh Mujibur Rahman, and organizing mammoth rallies against France,” Mahmood told BenarNews.

“The government leaders have been embarrassed by this demand on the statue and on cutting-off diplomatic ties with France.

Babunagari, as former secretary general of Hefazat, has been the group’s de facto leader since Shafi died in September. Under him, Hefazat and some other Islamist parties this month protested the installation of a Mujib statue in a suburb of Dhaka.

Mujib, Hasina’s late father, is a revered figure in Bangladesh. He spearheaded a pro-secular movement during the war of independence against Pakistan in 1971.

By contrast, JI, the opposition BNP’s ally, has been controversial since Bangladesh’s birth as a nation because it opposed what was then known as East Pakistan breaking from West Pakistan. Many of the party’s top leaders have since been executed for crimes against humanity allegedly committed during the 1971 war.

Still, Hasina may want to ensure that the stronger Hefazat faction is on her side because the influential organization has shown it has the ability to transform the political landscape, said Afsan Chowdhury, a political analyst and professor at Brac University.

“Hefazat has huge support in rural Bangladesh, a constituency that Hasina and the Awami League want to keep close,” Chowdhury told Benar News.

“She is a clever politician.”

Chowdhury was referring to the Awami League’s contrasting attitudes to Hefazat in 2013 and 2017 onward.

In May 2013, Hefazat organized a massive rally in Dhaka demanding the introduction of Sharia law, including a blasphemy law with a proviso to execute secular bloggers and those who defame Islam.

The rally followed the brutal slaying in February 2013 of secular blogger Ahmed Rajib Haider, and preceded a string of machete-killings of other bloggers carried out by Muslim zealots in 2015 and 2016.

At that time, the Awami League government took decisive action, mobilizing security forces to begin operations to end the rally. Officials said 39 people, including police, were killed in this operation.

Then in 2017, as general elections loomed, Hasina decided to court the support of faith-based groups, in a bid to counter the challenge from the BNP, which had aligned with the JI party.

The Awami League looked to Hefazat and began making concessions to the hardline organization.

Soon after, the government said it would recognize degrees from thousands of unregulated Qwami madrassas – Islamic schools. The prime minister also agreed to changes in public school textbooks to make them more “Muslim-friendly,” as demanded by Hefazat.

On the Hefazat demand to demolish Mujib’s statues, an Awami League member told reporters on Nov. 16 that the party was “following the issue.”

For its part, the pro-government faction in Hefazat isn’t stepping away quietly.

Mawlana Altaf Hossain, a former Hefazat central committee member now left out in the cold, said he and other supporters of Madani were regrouping.

“We are engaged in the ground work and will form a new committee by Dec. 31,” Hossain told BenarNews.

A split in Hefazat along party lines may well be in the offing, Mohiuddin said.

“A bifurcation of Hefazat is inevitable now,” he said.

Meanwhile, Babunagari and his supporters aren’t afraid of the Hefazat faction that opposed them, said Ahmad Abdul Quader, vice president of the new central committee.

“They can form a counter-committee – it does not matter. We are not worried about it at all,” Quader told BenarNews.