Bangladesh: Protest, arrest and its aftermath 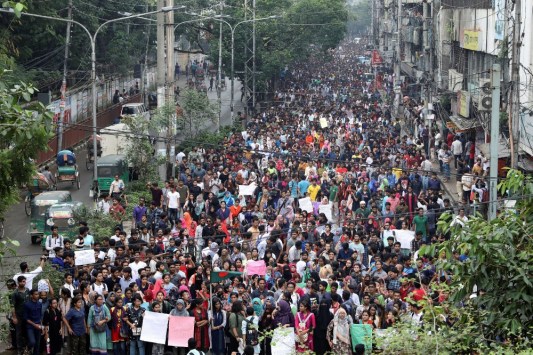 Bangladesh is a land of mostly negative happenings. As the populous country is approaching the next general (national) elections by the end of this year, we can expect more public chaos, protest demonstrations, media outburst followed by government crackdowns and international outcries.

The preparation for an unusual show of ballots has already begun in the south Asian country, as a tragic accident in the street of Dhaka led to public mobilizing and subsequent arrest of nearly hundred agitators, mostly high school, college and university students.

Some of them are now released on bail, but many remained inside the jail including a renowned photographer turned social thinker Dr. Shahiful Alam, who was picked up by the police personnel in the civil dress from his Dhanmondi residence on the night of August 5.

The incident that pained the nation took place on 29 July 2018 at the airport road, when a reckless speeding privately operated bus ran over a group of students waiting for their respective vehicles, killing at least two (Abdul Karim Rajib and Diya Khanam Mim) students and injuring many others.

Soon after the incident, many senior students boycotted their classes and assembled on the location as a mark of protest. They also demanded a concrete set of road safety guidelines for the country.

Slowly their protest attracted many other students, and it finally expanded to many other city and towns of Bangladesh. The protest program finally emerged as a massive anti-government demonstration.

The students of higher school standard in their school uniforms started checking driver’s licenses and other documents relating to the vehicles plying on the road. They also asked the drivers to follow the respective lanes leaving aside space for emergency users. The situation annoyed the owners, and they decided not to ply their vehicles, thus putting pressure on the government to take away the agitating students.

The students’ agitation instantly drew the attention of local media, artist-intellectuals, progressive thinkers in Dhaka. Appreciating their spirit, Bangladesh’s lone Nobel laureate Dr. Muhammad Yunus termed it as unprecedented and commented that the nation would never forget their demonstration. In a media piece, he also criticized the Hasina government for losing an opportunity to address the youth’s anger passionately.

“The agitating students demanded enforcement of traffic laws so that no one else would have to sacrifice their young lives under the wheels of uncontrolled buses and other vehicles,” said the former managing director of Grameen Bank adding that he supported their dream of a new Bangladesh and also wants to be a part of that initiative.

Feeling nervous, Prime Minister Sheikh Hasina started taking strong actions against the demonstrators. She realised that the movement may have started with the issue of road safety, it may emerge as a significant political challenge to her. After all, she wants to get elected once again like that of last nationwide polls in 2014 where most of the opposition candidates left the fray.

The crackdown of Dhaka was assisted by the student organ of ruling Awami League, where the Bangladesh police jumped over the demonstrators in various places. Many masked youths (student wing of the ruling Awami League) were seen attacking the protesters. They even did not spare the reporters and photojournalists on duty.

International media rights body Reporters Sans/Without Borders (RSF) promptly issued a statement calling the authorities ‘to ensure the safety of journalists after a dark day for press freedom on 5 August where at least 23 reporters were attacked by government supporters while covering student protests in Dhaka’.

Simultaneously, the authorities started arresting the demonstrators. The victims included many social activists who raised voices against the Hasina government in the alternate media. One among them is Dr. Shahidul Alam who narrated his resentments in an international news channel. The sixty plus activist is still behind bars and waiting for next court hearing on 11th September.

By now, international condemnations poured over the Hasina government for its crackdown on non-violent agitators and demanded the immediate release of all detainees. Amnesty International, Human Rights Watch, and South Asians for Human Rights Committee to Protect Journalists registered their objections against the authorities in Dhaka.

Celebrated Bangladeshi author Taslima Nasreen, while expressing her opinion over the issue, pointed out that the protesting students may not ‘force a government to bar unlicensed drivers from getting behind the wheel, or motorcyclists to ride without helmets’, but what they have managed to do on the streets of Dhaka within just a couple of days was impressive.

The exiled writer, of course, made it clear that she still prefers Hasina’s Awami League over Begum Khaleda Zia’s Bangladesh Nationalist Party (in association with Jamaat-e-Islami) to rule her country. She, however, admitted that the faith and respect many progressive individuals across the globe had for Hasina is slowly dwindling.