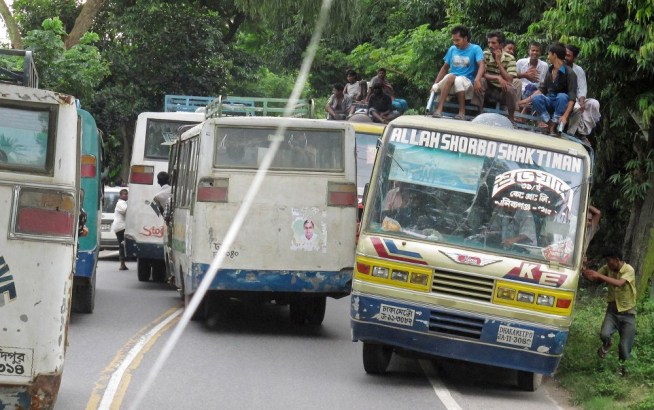 Bangladesh’s leader says public transportation drivers should not be driving more than five consecutive hours on the country’s highways, as a way to reduce traffic fatalities after road accidents killed more than 6,000 people nationwide in the past two years.

This is just one measure that Prime Minister Sheikh Hasina instructed her government’s concerned ministries this week to undertake among a host of directives aimed at improving workplace conditions for drivers of buses and other public transit vehicles in order to lower the number of road-related deaths, according to her cabinet secretary.

The directives, which came during a cabinet meeting on Monday, include adding substitute drivers to back up the main driver and take over the wheel on long-haul routes; ensuring that professional transport drivers and passengers are equipped with seat belts on long-distance routes; as well as installing restroom and refreshment facilities for transit drivers at key points along the highways.

The nation’s 7 million bus drivers, rickshaw operators and other who work in the public transportation sector have widely been blamed for the high number of accidents on the nation’s roads, even though unions representing them say they are overworked and paid low wages, mostly working without written contracts from their employers.

Bangladesh, a South Asian nation of 163 million people, has one of the world’s highest death rates from road crashes, according to the World Bank.

From 1998 to 2005, four out of 10 traffic accidents in the capital Dhaka involved at least one transit bus, and nearly 40 percent of those crashes were classified as fatal, police figures show.

Hasina issued the directives as soon as she heard news that five people had died earlier on Monday in a road accident in Tangail district, Alam said. Hasina also said steps should be taken to stop jaywalking by pedestrians.

Shipping Minister Shajahan Khan, who is also the executive president of the Bangladesh Road Transport Workers’ Federation, told BenarNews that drivers are often blamed, “but nobody looks into the root cause of road accidents.”

However, “for the first time in the country’s history, the prime minister has taken an effective initiative to solve transport worker’s problems,” he added.

His ministry is among those affected by Hasina’s directives.

According to the minister, professional drivers in Bangladesh work an average of 16 hours each day.

“It is impossible to continue this type of work for a worker. If they violate the law, they must be punished, but we shouldn’t just blame them and demand their punishment in case of accidents, without solving their practical problems,” he said. “According to the government reports, defective road design is one of the main reasons for most of the accidents.”

Mohammad Suman, a bus driver, told BenarNews that transport workers often do their jobs without taking their meals on time or taking a rest while negotiating clogged highways.

“If transport workers really get a chance for a rest every five hours, it will definitely reduce accidents,” he said. “But it will require the cooperation from vehicle owners.”

“If owners don’t appoint substitute drivers,” he said, “then this directive will not benefit us at all.”