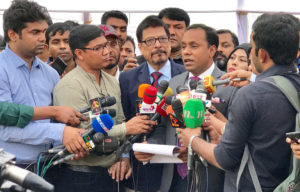 Bangladesh’s election commission has invited international and local organizations to observe nationwide polls scheduled for Dec. 30 and the U.S. Embassy has confirmed that American teams would be sent to monitor the balloting, officials said Wednesday.

Prime Minister Sheikh Hasina is seeking a third straight term through the general election, but opposition groups have expressed concerns of possible vote rigging while their main leader, Khaleda Zia, remains in jail after being twice convicted this year on graft charges.

Foreign organizations such as the Organization of Islamic Cooperation (OIC) and the Forum of Election Management Bodies of South Asia (FEMBoSA) were invited to observe the polls, said S.M. Asaduzzaman, the Election Commission’s media relations director.

“In line with the decision of the Election Commission, we have invited the European Union (EU), the United States, the Commonwealth, the OIC, the FEMBoSA and other organizations to observe the polls,” he told BenarNews,

The Commonwealth is an organization of 53 nations that are mostly former territories of the British Empire.

“But we have yet to get the desired response from them. The Commonwealth, the FEMBoSA and other bodies have yet to write to us. Hopefully, they will respond,” Asaduzzaman said.

The U.S. Embassy in Dhaka and the Washington-based National Democratic Institute (NDI) had shown interest in observing the polls, he said.

“The US embassy in Dhaka has sent us a list of 65 people,” he said. “The list includes poll observers, translators, security team members and others.”

Asaduzzaman said the embassies of Japan, Germany and Spain had written to the commission expressing their interest in sending representatives.

William Moeller, political officer at the American embassy, told Reuters last week that Washington would send a dozen teams, each consisting of two observers who will fan out to most parts of the country.

“The Bangladesh government has emphasized that it plans to hold a free and fair election,” Moeller said. “We welcome that and are providing funding for election observers who hope to see such an outcome.”

Most of the observers would be local employees of the embassies, but they will be backed by almost 35,000 people belonging to 118 local NGOs, Asaduzzaman said.

Last month, local newspapers quoted the Election Commission’s secretary, Helaluddin Ahmed, as instructing election observers to avoid speaking to the media or issuing statements while performing their duties during the polls.

“The election observers must stay at polling stations like statues, even if there’re irregularities,” Ahmed said.

On Nov. 28, a European Union delegation met with Chief Election Commissioner K.M. Nurul Huda and said that the regional bloc would not send a full mission to observe the elections in Bangladesh.

“There is no political reason for not fielding a full polls observation team,” an official with the EU delegation in Dhaka told BenarNews on condition of anonymity. “We have sent two election experts. They have already started working in Bangladesh.”

Derek Mitchell, president of the National Democratic Institute (NDI), told foreign minister A.H. Mahmood Ali in a letter dated Dec. 4 that it would be interested in observing the polls through the Asian Network for Free Elections (ANFREL).

ANFREL would deploy international long-term and short-term observers for the Dec. 30 general elections, Mitchell said, adding that the NDI had provided financial support to ANFREL, a body composed of 26-member organizations from 16 Asian countries.

BenarNews has obtained a copy of the NDI letter, which elections officials said was forwarded to them by the foreign ministry.

“Those who want to rig the polls fear the foreign observers because the news about manipulation would be exposed overseas,” he said. “Then the whole electoral process will be in question.”

Zia, a former prime minister, says the charges against her were politically motivated. The main opposition Bangladesh Nationalist Party, which Zia leads, boycotted the last election in 2014, effectively allowing her bitter rival, Hasina, to stay in power.