Bangladesh elections and absence of democracy 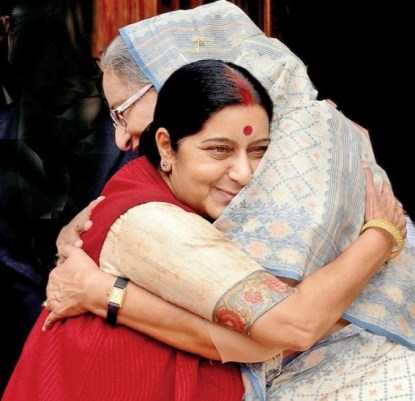 In Bangladesh, the Prime Minister has all the power and to grab this power; the two large parties participate in elections. One side wins; the other party goes on the run. Their leaders get hundreds of charges against them, and they are ridiculed, some get killed or abducted. The race is to grab absolute power while one is a Prime Minister. Everything revolves around the Prime Minister. It’s an awesome prize, and that is what the two ladies vie for. It is a five-year term, but now the trend is to keep it perpetual under the hand of one party or one person or family.

In 1974, the founding leader of Bangladesh, Mr. Sheikh Mujibur Rahman, the father of the present Prime Minister declared a one-party system to keep the power in his hands for an indefinite period. His daughter, Sheikh Hasina, who Forbes magazine has placed as the 30th powerful woman in the world is ruling Bangladesh for two successive terms, and the predictions are; she will rule the country for another five years by an election process which is expected to be rigged in her favor. The last election occurred in 2014 at which time 154 parliament members out of 300 were unelected.

When the Chief Justice of the country Mr. Surendra Kumar Sinha recently wrote an opinion: “Parliamentary democracy is immature and to attain its maturity, there is a necessity of practicing parliamentary democracy continuing for 4/5 terms!”. He was implying on the issue of the 154 unelected parliamentary members and thereby reflecting on the legitimacy of the present government. The political scientists believe, having an election under such a government could not be fair.

It was therefore surprising that the whole establishment of Sheikh Hasina went against a judgment of Chief Justice of the Supreme Court on the annulment of 16th amendment of the Constitution. The Chief Justice S.K. Sinha was hounded out. He has gone on a month’s medical leave (He is a cancer patient) though it is improbable he would return after leave. He was due to retire on February 1 next year. By making personal attacks on the Chief Justice, the Bangladesh government has not brought itself any glory as these amounted to an attack on the judiciary itself! They have left a bad taste- avoidable, and certainly, the Bangladesh judiciary is as independent as any other similar organization elsewhere!

Indian foreign secretary Shushma Swaraj’s recent visit to Bangladesh and her cordiality with PM Hasina in public can be seen as a sign of what is expected to come in the next election in 2018/2019. India relies on Sheikh Hasina as she delivers what they want. She is the most reliable ruler of an important Indian neighbor. India was reportedly involved in the inner workings of the 2014 elections, stood by the side of Sheikh Hasina even though the majority of the parliamentarians were not elected. India was the first country to declare legitimacy of that election. The next election is expected to be a run of the same. By showing intimacy with the most powerful woman in Bangladesh, Sushma Swaraj has emboldened Sheikh Hasina and the ruling party “Awami League.”

Recent worldwide deterioration of democracy and human rights have emboldened many authoritarian governments, and Bangladesh is no exception. The advent of Donald Trump as the president in the United States has boosted these autocratic rulers. The recent elections in Kenya and Cambodia are certainly going to be an encouraging path for the next election in Bangladesh.

The opposition, Bangladesh Nationalist Party chairperson Khaleda Zia on Thursday told a Dhaka court that the ruling quarters had prepared a blueprint to remove her from the political arena and make her disqualified to contest polls out of evil political agenda. She remarked while defending herself for the third day in the Zia Orphanage Trust graft case at a makeshift court of Dhaka Special Judge Akhtaruzzman at Bakhshibazar in Dhaka.

Whatever semblance of independence of the judiciary was there in Bangladesh, it has been eroded by ejecting the Chief Justice of the supreme court by sending him to a forced vacation at a crucial time. One senior minister said that the sitting judges are “immature.” Another said that the Chief Justice should be sent to a lunatic asylum. A third one said that the judgment was perhaps written by another English knowing editor or by the ISI of Pakistan. Another called the Chief Justice a Razakar who helped the then the Pakistani government while Bangladeshis were in the liberation struggle.

The present government has neutralized all organs of the state; military, police, civil servants and all administrations to the lowest positions in the local level. Election Commission has been made into a tool for implementation of the wishes of the government and in paper, legitimizing the mockery of an election. If the next election is not conducted in a fair and secure atmosphere, Bangladesh will be lost in the darkness of authoritarianism for an unforeseeable future. Ordinary Bangladeshi citizens are just spectators in a choked atmosphere.