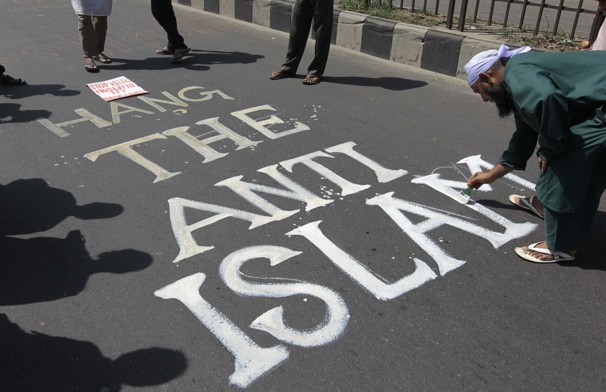 For over two months Bangladesh has been locked in a fierce battle pitting the government and its moderate Muslim allies against the demands of groups espousing a radical interpretation of Islam.  At stake is the country’s secular identity and its prospects to become an open and tolerant environment for religious freedom and human rights.   Protesters are demanding the government adopt a blasphemy law, which would include the punishment of death for anyone convicted of insulting Islam or the Prophet Muhammad.  Thus far the Prime Minister of Bangladesh, Sheikh Hasina, has rejected the demand.  Perhaps she sees the detrimental effects that Pakistan’s blasphemy law is causing and knows that such a law would be a poison pill to the stability of her country.

Marchers in last weekend’s rally in Dhaka, attended by over a hundred thousand supporters of the Islamist group Hefazat-e Islam, demanded a blasphemy law with a capital offense be adopted by the government.  Fighting ensued, leaving over a dozen people killed and hundreds more injured, which was just the latest in a string of violence in the country.  In February, the country’s International War Crimes Tribunal sentenced Delwar Hossain Sayeedi, a Jaamat-e-Islami leader, to death.  In response, violence broke out leaving over 60 people dead, mostly from Bangladesh’s minority Hindu community, and dozens of Hindu temples, shrines, homes and businesses badly damaged or destroyed.  Also in February internet blogger Ahmed Rajib Haide, who was critical of Islamist groups was hacked to death; and in early April four internet bloggers were arrested for “harming religious sentiments,” in other words for speech considered blasphemous.  In each of these cases, these groups have used anti-religious minority rhetoric, violence, and called for a blasphemy law.

The stakes in the conflict are becoming increasingly high, as the country marches towards its 2014 national election. The very real fear is that this battle, which began in February, will continue and become increasingly violent.  Bangladesh has experienced this type of election related violence in the past.  An adopted blasphemy law would only increase the likelihood of violence, as it would empower extremist elements in Bangladesh to marginalize, intimidate, harass, and attack religious minority communities, as well as moderate Muslims, thereby threatening Bangladesh’s long-term success and secular identity.

The possibility of this result can easily be derived

The U.S. Commission on International Religious Freedom (USCIRF), where we work, has repeatedly documented how Pakistan’s blasphemy law is used to perpetrate egregious human rights abuses and intimidate members of religious minorities or others with whom the accusers disagree.  The blasphemy law is subject to gross abuse, as it requires neither proof of intent nor evidence to be presented after allegations are made, and includes no penalties for false allegations.  Additionally, religious freedom for all Pakistanis, both Muslims and non-Muslims are detrimentally affected.  In fact, Muslims are the main victims of this abusive law, as more cases are brought against them than other faith communities, although the law has a greater impact per capita on minority religions.  USCIRF is aware of 16 individuals on death row and 20 serving life sentences in Pakistan.

In addition, the law is widely viewed as helping create a climate of vigilantism where militants kill individuals with impunity.  As a result, the mere allegation of blasphemy has resulted in lengthy detentions, as well as violence against Christians, Ahmadis, Hindus, other religious minorities, and members of the Muslim majority community.  Similarly in Bangladesh, secularists and minority religious communities are already vulnerable, which would increase under a blasphemy law.

The violence being perpetrated in the run up to Pakistan’s historic election by the Pakistani Taliban and other terrorist groups against “secular” political parties demonstrates how a blasphemy law can undermine a political system and a country’s stability.  Notably, Pakistan’s blasphemy law was added to the country’s penal code by General Zia-ul-Haq, which provides a stark reminder of how the actions of one leader can have lasting and devastating effects on the future of a country.

In short, a codified blasphemy law empowers violent extremists, limits legitimate debate, hinders the growth of civil society and the rule of law, and undermines the ideals of an open and pluralistic society.  Above all, it violates international human rights law, including religious freedom.

Prime Minister Hasina must decide whether to reject the calls for a blasphemy law and do more to protect minority religious communities, or bend to extreme pressure and adopt it.   She should heed Pakistan’s experience with their blasphemy law, and not cave to the pressures of extremist groups in Bangladesh.  If she does, Bangladesh will likely follow the trend of its westerly neighbor, becoming increasingly unstable and more violent.