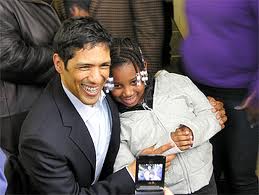 [The 53-year-old Detroiter is one of nine new Democrats in the 112th Congress. He defeated Republican businessman John Hauler in November and seven-term incumbent Carolyn Cheeks Kilpatrick in August's Democratic primary.

Clarke's father Abdul Hashim immigrated to the USA from Sylhet (now in Bangladesh) in 1930s. He died when Clarke was 8 years old. His African-American mother Thelma Clarke had to work as a school crossing guard to support her son through school. His talents in painting got him a scholarship in Cornell. He dropped out of Cornell and remained unemployed for a while and later returned to Cornell to graduate and subsequently entered Georgetown University to complete his law degree.

He served 6 years in the Michigan state house and subsequently completed 2 terms as State Senator and once ran unsuccessfully for mayor of Detroit.

I met Clarke several times when he was a state Senator. He was always emotional when he met people from his father's land which is Bangladesh today. On many occasions, my husband asked him to visit Bangladesh where perhaps, he could fulfill his father's dream of finding a bride from the same ancestry.]

Q. I knew you as a State Senator from Michigan and now that you are U.S. Congressman, do you feel that you can do more for your constituents from Washington?

A.  Yes, absolutely. There is a lot of critical investment needed to help Metro Detroit and all of southeastern Michigan that really only comes from the Federal level. Right now there are important questions regarding the deficit that are going to affect all Americans, including my constituents, and it’s going to be crucial when we decide how to deal with our National debt that we don’t make deep cuts that are only small in their effect on the deficit, but wind up hurting job training, or stop kids from going to college, or prevent people from getting the healthcare they need.

Q. In the past, you visited Bangladesh once but as a Congressman, would you like to visit Bangladesh and the Sub-Continent anytime soon?

A.  My first visit to Bangladesh a few years ago was extraordinary. I look forward to visiting my family again sometime soon.

Q. South Asia was mostly India before the partition of 1947. Hindus, Muslims, Christians and people of other beliefs and ethnicities lived here harmoniously for thousands of years. Do you identify most strongly as someone of South Asian or Bangladeshi origin?

A.  That’s a good question. I’m proud of my heritage on both my mother and father’s side.  I was born and raised in the United States, in Detroit, and that’ll always be my identity, but my formative years were spent with my Father and his countrymen.  They represented a different culture—Indian culture—and that’s what I’m really steeped in even though I’m a guy from Detroit.  My dad was born in Sylhet, which is presently in Bangladesh, but he was born before the Partition and always identified strongly as an Indian. I feel privileged to be able to say that I’m a US Congressman of Bangladeshi heritage.

Q. You are going to serve in the Committee of Science, Space and Technology. Will you promote greater cooperation with smaller countries like Bangladesh over and above US-India strategic partnership?

A. I don’t think one has to necessarily come at the expense of the other. There’s been a lot cooperation in space and technology between the US and India in recent years, in terms of launching each other’s satellites and payloads, and then commercializing these new technologies, that I think that’s ultimately beneficial to the region as a whole including Bangladesh

Q. As you are a person of a South Asian origin, the people from that area would be eager to see your close involvement into the peace process amongst nations in the region; that the nations in the area work towards close cooperation, sharing water and other strategic resources. Would you like to see that the American policy toward the entire region is even handed?

A. Yes. Today I think people can see how intertwined our security interests are from a global perspective.  American security depends upon regional security in South Asia and vice-versa, and it’s important for me to see that the US is a responsible advocate for peace in that region.

Q. Do you intend to join the Bangladesh American caucus in the Congress? If you do, will you be pro-active as opposed to many others who have been rather dormant when it comes to Bangladesh issues.

A.  Yes. I informed the India and Bangladesh caucuses that I wanted to be member of both even before I was sworn into office. I’ve been vocal about the Homeland security hearings and the importance of not stereotyping Muslims, who are overwhelmingly peaceable and upright members of our society, and I’ve also spoken up on the House floor about the experience of my father–an Indian immigrant who risked everything to come to work in an automobile plant in Michigan–and how his story underscores American values and the American dream, and how it ties into the importance of resuscitating American manufacturing.

Q. As you know, democracy has taken root in Bangladesh in a very erratic manner. Both political and economic corruption is rampant over there. Otherwise, Bangladesh could achieve over a 10 percent growth rate. Would you be pro-active into promotion of true democracy and civil society in Bangladesh?

Q. I know it is too early for you to get involved or comment on matters that are so important to a Less Developed Country (LDC) like Bangladesh.  Readymade garments  (RMG) manufacturing companies in Bangladesh are wondering why the USA is not removing restrictions on duty free market access at a time when Bangladesh is complying with all commitments with regards to labor standards, child labor elimination and such other sanitary and non-sanitary requirements. As you know RMG sector is the economic lifeblood of Bangladesh where more than a million workers are employed. Most of these are women. Bangladesh needs a voice in Washington. Will you be that voice?

A.  There’ve been a couple of Congressman, Jim McDermott from Washington and Keith Ellison from Minnesota, who’ve been working hard to try and pass the NPDA (New Partnership and Development Act) as expeditiously as possible, and I’ve been a strong supporter of those efforts since I’ve been here. The passage of that bill would allow access to duty free markets for Bangladesh’s RMGs.

Q. You wanted to run for Governor of Michigan after your term as State Senator ran out.   All your life, you were intertwined with local politics of Michigan. You district has been virtually paralyzed by the loss of manufacturing base and is in a major economic mess. As a Congressman, how will you help alleviate sufferings in your district?

A.  I am an advocate for policies to promote US manufacturing.  China is researching heavily into green technology, and has ambitions to be the world leader in that field, while the US has fallen behind. I think the US should be at the forefront of pioneering new green technologies, and I think a strong manufacturing sector can be the backbone of that endeavor. Something like that would be great not just for Michigan, but for the whole country.

Q. What message, if any, would you like to deliver to Bangladeshis living in America?

A. I’d like to emphasize the importance of working together, of supporting each other. By being a strong community you’ll also prosper as individuals, and that’s vitally important not just for Bangladeshis but for all Americans.