The decision, which will see close to 150 employees lose their jobs, came after the recent move by the Enforcement Directorate to freeze the organisation’s accounts. 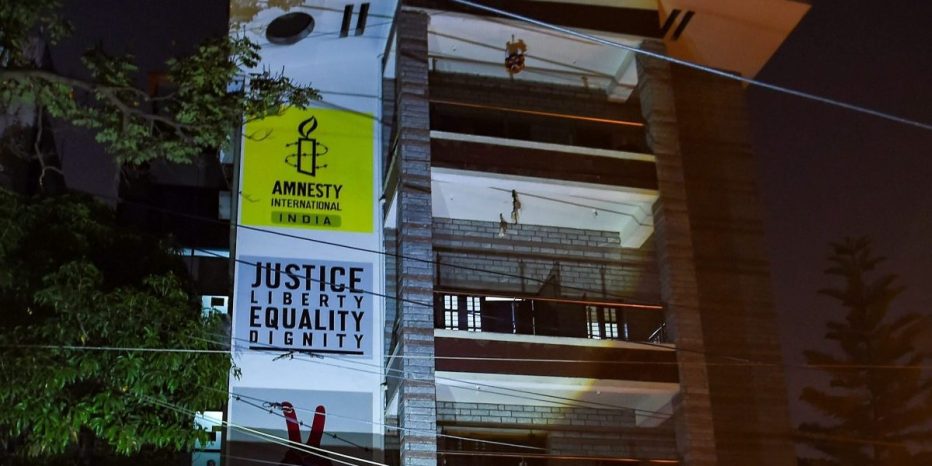 Mumbai: After a successful eight-year run in India addressing several crucial human rights violations amid growing hostility and the government’s clampdown on civil liberties, Amnesty International (AI) India has decided to shut its operations in the country. The decision, which will see close to 150 employees lose their jobs, came after the recent move by the Enforcement Directorate to freeze the organisation’s accounts.

The ED, following an FIR by the Central Bureau of Investigation (CBI), filed on November 5, 2019, on charges of an alleged violation of the Foreign Contribution Regulation Act (FCRA), had initiated a separate probe last year. The ED has now converted the preliminary inquiry into an ECIR (the equivalent of an FIR) alleging money laundering charges and froze all of AI India’s bank accounts. The ED has invoked the Prevention of Money Laundering Act this time.

In a press statement, AI’s India office has said, “On 10 September 2020, Amnesty International India came to know that all its bank accounts were completely frozen by the Enforcement Directorate bringing most of the work of the human rights organization to a grinding halt.”

It blamed ‘reprisal’ from the government for winding down its operations, adding, “This is latest in the incessant witch-hunt of human rights organizations by the Government of India over unfounded and motivated allegations.”

In July, last year, the ED had served a show-cause notice for alleged contravention of funding to the tune of Rs 51.72 crore. Although the FCRA law, whose provisions were invoked by the CBI in its case, is not listed in the schedule of predicate offences under the PMLA, Section 120-B (criminal conspiracy) of the Indian Penal Code was invoked. And since section 120-B  of the IPC is invoked as an alleged offence in the CBI FIR, it enables the ED to initiate a money-laundering investigation.

The 150-odd employees include the research, campaigns, advocacy, and tele-callers teams. Avinash Kumar is the current executive director of the organisation; he took over only a year ago, after his predecessor and well-known columnist Aakar Patel’s tenure ended. Despite being left in the lurch, several employees have come forward to work as volunteers for a few months to ensure that the pending work is completed. “This was a sudden decision but we saw it coming for a long time,” said one campaigner, who has been associated with the organisation for several years. The organisation, however, is particularly concerned about letting go of such a huge number of employees during the COVID-19 crisis.

The organisation in recent years have been working on five crucial projects—business and human rights, individuals at risk, gender-based violence, human rights education, and access to justice in Jammu and Kashmir. Besides these full-fledged projects, AI India has also issued statements from time to time on issues involving human rights violations.

Their most recent contribution were two exhaustive reports on the situation in Jammu and Kashmir and the riots in Northeast Delhi. On August 5, 2020, marking the first anniversary of the dilution of Article 370 of the Constitution of India, the organisation released an update on the situation of human rights in Jammu and Kashmir. And within days, on August 28, 2020, six-months after the riots in Delhi, AI India released an investigative brief on the complicity of Delhi police in the violence, which claimed the lives of at least 53 people, mostly from the minority Muslim community. The release of the two publications, the organisation says, “Has provided fresh impetus to the establishment to harass and intimidate Amnesty International India through its investigative agencies.”

AI India first ran into trouble in 2016, when during an event held as a part of a campaign based on the report “Denied: Failures in accountability for human rights violations by security force personnel in Jammu and Kashmir”, students from the right-wing group Akhil Bhartiya Vidyarthi Parishad (ABVP) had created a ruckus. An FIR was filed against AI India the following day, including sedition charges, and the organisation had to keep its Bangalore and Delhi office shut for a few days fearing violence. 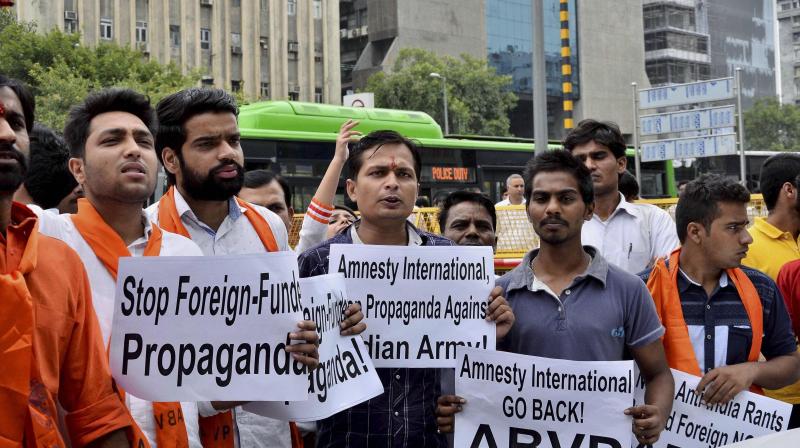 The organisation continued to face many cases and raids, and on October 25, 2018, AI India endured a 10-hour-long raid as a group of officers from the ED entered its premises and locked the gates behind them. Most of the information and documents that were demanded during the search were already available in the public domain or filed with the relevant government authorities. The residence of the then executive director Aakar Patel was also raided.

Even then, the ED froze the organisation’s bank accounts. As a result, AI India says it was forced to let go of a number of its staff, adversely affecting its work in India including with the marginalised communities. “Despite the ongoing investigations and before the framing of charges, the Government of India started a smear campaign against Amnesty International India in the country through selective leaking of documents gathered by the ED, to government-aligned media outlets. This resulted in a malicious media trial against the organisation,” the organisation has stated in its press statement.

Not just the ED, the Department of Income Tax was roped in too. In early 2019, the IT department began sending “investigative letters” to more than 30 small regular donors. While the department did not find any irregularities, the investigating agencies’ move adversely affected the fundraising campaigns, AI India has said.

The same year, in June, the organisation was denied permission to hold the press conference launch in Srinagar to release its third ‘Lawless Law’ report on the misuse and abuse of the Public Safety Act in Jammu and Kashmir. The organisation had to release the report digitally later. On October 22, 2019, the organisation’s international office testified in a US Congressional hearing on the situation of human rights in South Asia, with specific focus on Jammu and Kashmir since the unilateral dilution of Article 370 of the Constitution of India.

Taking the J&K issue to an international platform did not go well with the BJP-led government. AI India says, “On 15 November 2019, two weeks after the testimony and amid rumours of impending arrests of the organizations top officials, the offices of Amnesty International India and the residence of one of its directors were raided again by the CBI. The raids were conducted on the basis of a First Information Report filed by the Ministry of Home Affairs over unsubstantiated allegations of suspected violations of the Foreign Contribution Regulation Act. It suggested investigations be launched under other laws like the Prevention of Money Laundering Act.”

Each time the organisation put out a statement or took a public stand, they have been hounded. AI India points to an incident on April 13, this year when they had called on the Uttar Pradesh government to stop its intimidation of journalists through the use of repressive laws during a pandemic. Within two days, the Cyber Crime Police Station in Lucknow notified Twitter to furnish information about Amnesty International India’s Twitter account @AIIndia. This Twitter handle, Amnesty says, is used to monitor and analyse developments in international human rights law and Indian constitutional and criminal law related to human rights issues. 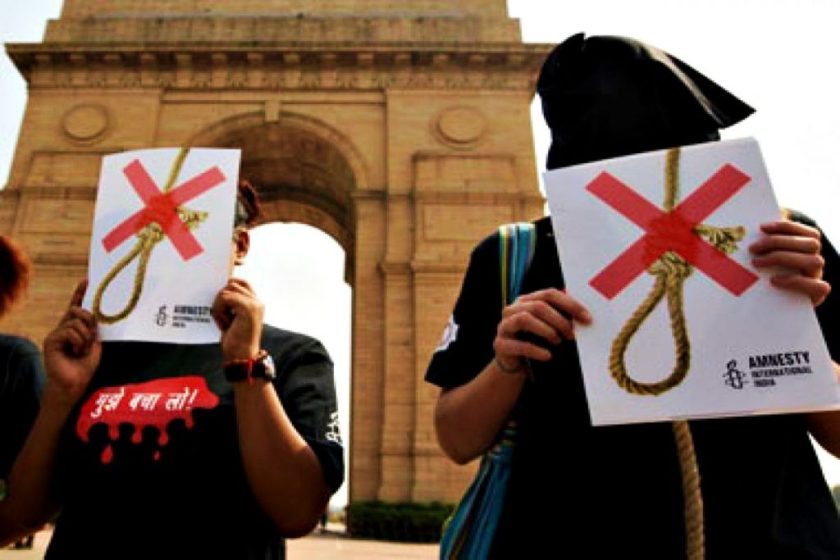 An Amnesty campaign against the death penalty. Photo: Reuters

Verhaar added, “The Amnesty movement is very proud of the vital work carried out by our outstanding colleagues in India regardless of the risks they faced, including their unequivocal calls for accountability for the actions of the authorities during the Delhi riots and in Jammu and Kashmir and their work on gender-based violence.” Sadly, Verhaar says, this “enormously important work standing up for victims” has been met with the “heavy-handed tactics that Indian civil society has become increasingly familiar with – part of the government’s drive to silence critical voices and stoke a climate of fear”.