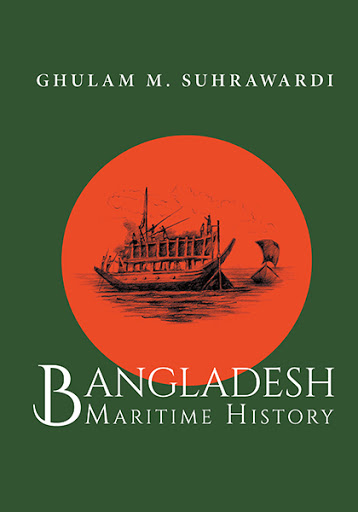 The publication of this book fills a void in a section of Bangladesh’s multifaceted commercial and social history. Without improvement of maritime transport, it can be assuredly stated, trade and indeed civilizations in various regions of the world would not have developed. This book, in effect, opens the window to a world which was always in existence but was often ignored especially as a topic of research and study, over the centuries.

In this context of human civilization—and specifically in the socio-economic progress of Bangladesh—this book covers a unique area that is often taken for granted in Bangladesh. As elsewhere in the world, inland maritime system has been thriving for millennia, and people in the region made this natural resource a part of their lives, livelihood and lifestyle.

Given the deltaic terrain of the land with its numerous rivers and canals, waterbodies were always a part of the people’s lives for a multitude of reasons: bathing, drinking, transporting goods, fishing, travelling and different forms of recreation, to name only a few. In the context of present and future developments, the riverine system has to be improved into a vibrant economic function.

Author Ghulam Suhrawardi has attempted to connect Bangladesh’s inland maritime history with that of ancient international trade. While trade between what was then India and the ancient civilizations like Rome, Egypt, Babylon and rest of the world developed into a seaborne maritime system between ports in Southern India and the Red Sea; sea routes to Bengal was in the north and hence did not fall in the path of the traditional ocean going vessels.

Evidence of a Chinese naval expedition headed by Zheng He (1371–1433) during the Ming dynasty appears in some historical notes, but other than that, most trade via sea lanes were opened in recent history when the Europeans were competing to inaugurate their trading posts in India. Bengal was naturally chosen as it was further away from the central power base in Delhi and was easier to capture and control. Thus Calcutta (now Kolkata) became the first major seaport that served both the British military and their merchants.

Though basically they came to loot and plunder the wealth of Bengal but while collecting wealth and resources they also built a political superstructure and a transport system to facilitate attainment of their goals. Many scholars still debate whether the intrusion of the British into Bengal was good for Bengal or India as a whole. When the colonists left in 1947, the Indian sub-continent was divided along religious faultlines further restricting the free flow of inland maritime vessels that traditionally plied in the region of Bengal and Assam. Bengal obviously included West Bengal of India and present-day Bangladesh. This division was an immense blow to the traditional inland maritime system that had functioned for centuries.

This well-researched book also opens the door to further discussion and incision into the subject. It may be possible to save the old riverine system if the Indian and Bangladesh governments take up the matter seriously and let Mother Nature choose the path of forward movement. A political solution can be developed into a robust system if these two countries consider trade more than political landmines.

In that perspective Bangladesh Maritime History is a point to start an insightful discussion to reconnect the ancient riverine system that existed between old Bengal and Assam and other neighboring provinces. This will not only ensure peace for the region but also encourage tremendous cooperation in exchanges of people and goods. A good river transport system can not only enhance economic development but, as a dividend, also enlarge cooperation between the peoples who were geographically connected for centuries.

While the book unbolts the door to discussions and planning, it does not cover a detailed micro-level analysis. Consequently a much deeper study is essential before the political establishments of Bangladesh and India can embark on a plan that would benefit the peoples of the region. The rivers exist as they did for centuries, but they need to be nurtured and developed rather than creating barriers for nations in the downstream. For the benefit of a greater number of people, the rivers should be allowed to flow like they have done for millennia; damming and diverting water can and will only hurt the people.

Maritime History of Bangladesh in a short and snappy style provides much useful background information about the role riverine transportation has played in the history of the land since time immemorial. More importantly, this book also provides an opportunity to initiate a discussion on the future development of the sector for the benefit, not only of the people of Bangladesh, but also for the entire region. Readers and researchers engaged in utilizing this efficient and cost-effective mode of transport will find the book a platform for further understanding of the subject.

The production quality of the book must be noted, too, while the photographs used immensely raise the utility of the book as well as further an appreciation of transportation via the rivers, canals and channels. Illustrations and photos of the varied types of boats, used over the centuries, by themselves will open a different arena of life for any reader or enthusiast. This book obviously is not only for those who have expertise in this sphere but is sufficiently informative and entertaining even for those who rarely took any interest in the subject dealt with in Bangladesh Maritime History.