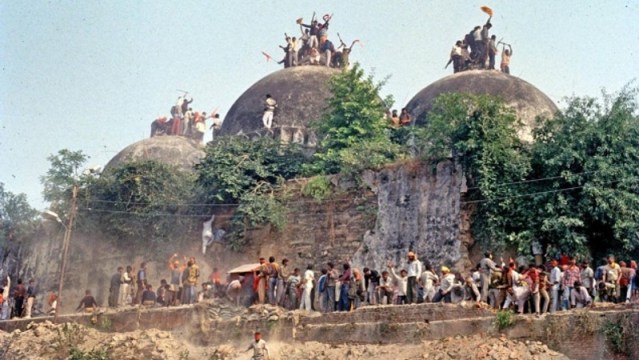 Why you should care

Because the world’s largest democracy has stood as a beacon of pluralism for seven decades.

For 70-year-old Haji Mehboob, born and raised in the north Indian city of Ayodhya, the sight of Yogi Adityanath, the state chief minister, visiting his hometown brings back memories of a period 25 years ago, when his place in India and his very survival were under threat. On Dec. 6, 1992, a mob of Hindu fanatics wearing saffron bandannas reduced a 16th-century mosque built by the Mughal emperor Babur in Ayodhya to rubble in six hours, arguing that the site was the birthplace of the deity Lord Rama. With the mosque’s destruction, they also delivered secular India its biggest warning since independence. But now, Mehboob fears that past is back in the shape of the present, threatening to determine India’s future.

From beneath the debris of the demolished Babri Masjid had emerged ideas of Hindu majoritarianism, the use of religion for political gains and the conscious alienation of Muslims from the country’s sociopolitical mainstream. For over two decades, those ideas rose and fell in the wrestling pit of India’s multiparty democracy, gaining momentum at times only to be checked by more secular strains at others. Under the current Indian government of Narendra Modi, though, many minorities and civil rights activists fear that the dam may finally be breaking. Modi’s Hindu nationalist Bharatiya Janata Party (BJP), to which Adityanath also belongs, came to power in 2014 with India’s first single-party majority in 30 years. In the Lok Sabha, the directly elected house of India’s parliament, there are just 22 Muslim legislators out of 543 –– the lowest ever since India’s independence, and much less than the community’s 14 percent strength in the country’s population.

The government’s supporters say the concerns are overblown. “Where is the alienation?” asks Rakesh Sinha, of the Rashtriya Swayamsevak Sangh (RSS), a social organization that is the ideological mother ship of the BJP. “This isn’t a communal representation.”

The aim is to send a message to Muslims that we can teach them a lesson.

Kamal Faruqui, spokesman of the All India Muslim Personal Law Board

But across India’s political and social life, patterns are emerging that seem to justify the fears Muslims are feeling. In 2014, Adityanath, then a fiery parliamentarian and now chief minister — equivalent to a governor — of Uttar Pradesh, India’s largest state and where Ayodhya is located, coined the term “Love Jihad” to allege that Muslim men were duping non-Muslim women to marry them, with the aim of getting them to adopt Islam. In 2015, Manohar Lal Khattar, the BJP chief minister of Haryana state, asked Muslims to stop eating beef to live in India. That same year, a mob lynched 52-year-old Mohammad Akhlaq on the outskirts of the national capital New Delhi, on allegations that he had beef in his refrigerator. According to data journalism site IndiaSpend.org, 97 percent of similar attacks on Muslims by cow vigilantes have occurred since 2014, when Modi assumed office. When Hamid Ansari, India’s former vice president, expressed unease among Indian Muslims in a TV interview, users on Twitter — one of them a member of the BJP –– insinuated that he was being an ungrateful Muslim. Back in 1992, a mob broke down a mosque. In 2017, cow vigilantes, online trolls and mainstream political leaders are tearing India’s social fabric, one tweet and one lynching at a time.

The politics of the mosque demolition received fresh life too. The Modi government is promising a museum to Lord Rama in Ayodhya. After he came to power in Uttar Pradesh earlier this year, Adityanath visited the demolition site and offered prayers. In August, the Supreme Court announced that final hearings on the fate of the site, under dispute because of contesting Hindu and Muslim claims, would commence on December 5 of this year, 25 years to the day after the mosque demolition. Over the past two months, Adityanath’s government has announced that it will build a Rama temple at the site before 2019 and a 100-meter tall statue of Lord Rama in Ayodhya. “They have no love for the cow or the Rama Mandir. The aim is to send a message to Muslims that we can teach them a lesson,” says Kamal Faruqui, spokesman of the All India Muslim Personal Law Board, an NGO that speaks for the community. To many, the fear and dejection are reminiscent of the late 1980s and early ’90s, when the country’s air stank of communal politics.

The Fall and the Rise

When Haji Mehboob woke up on the Sunday morning of Dec. 6, 1992, and peered out his window, he saw a crowd of men and women wielding chisels and ropes, pickaxes and crowbars, bringing down the mosque. Soon, they burned down his house. His family spent the night in a police station nearby, stepping out only after a curfew was imposed in the city and the BJP-run state government of the time had been dismissed.

But the events of that day were the result of a communal cauldron kept boiling by both the then-ruling Congress and BJP for years. In 1985, the Supreme Court of India ruled that Shah Bano, a resident of Bhopal in central India, was entitled to receive a maintenance amount from her ex-husband. In response, the then-Congress government, headed by Prime Minister Rajiv Gandhi, brought in a law that, in effect, overturned the court judgment. The law was seen as an attempt by the Congress to woo influential conservative Muslim voters. Ten months after this verdict, a district court in Ayodhya ordered that Hindu priests be allowed to perform shilanyas –– religious foundation-stone-laying ceremonies — at the Babri Masjid mosque.

The BJP, which then had just two members in India’s parliament, jumped at the opportunity to occupy the political center stage. In 1990, L. K. Advani, one of its founders and mentor to Prime Minister Modi, embarked on a Ratha Yatra –– a religious road trip –– to campaign for the construction of a Rama temple. He started in Somnath, Gujarat, and traveled 6,000 miles through central and northern India. Hindu fundamentalists and priests, sporting saffron robes and necklaces of prayer beads, greeted Advani during his numerous pit stops. “The march’s imagery was religious, allusive, militant, masculine and anti-Muslim,” wrote historian Ramachandra Guha in his book India After Gandhi. Advani’s speeches focused on Hindus being denied their “due” by political parties who indulged in “political appeasement” of Muslims. And a temple at Ayodhya, at the very spot of the mosque, would be the only way to rectify this mistake. “It was not a Masjid. It was a disputed structure,” insists Sinha. “Its demolition was not against any community. It was a show of anger.”

Advani’s journey came to an abrupt end in Samastipur, Bihar, when he was arrested on Oct. 23, 1990. But by then, his religious road trip had lit the sparks of communal tension. His “chariot of fire,” wrote political scientist K. M. Pannikar, led to 116 communal riots across India in which 564 people died. The road trip and the demolition of the mosque two years later gave prominence to a younger set of BJP leaders, including Modi, who had organized the Gujarat leg of Advani’s journey. Twelve years later, in 2002, another journey of fire that started in Ayodhya would inflame communal passions in Gujarat and propel Modi –– then chief minister of the state and Advani’s protégé — to national prominence. In February that year, a mob torched a train carriage with 58 Hindu pilgrims from Ayodhya on board. It sparked riots in Gujarat that left over 1,000 Muslims dead. “The storm that is on in this country is Advani’s contribution. He was the one who sowed the seeds,” Mehboob says.

The BJP’s political fortunes improved dramatically with the movement to replace the Babri Masjid mosque with a Rama temple. Its two members in parliament rose to 85 after the elections of 1989 and to 140 in 1996. Still, it wasn’t able to reach the 272 seats needed to form a federal government. Most other political parties still swore by secularism, and they treated the BJP as an untouchable. The BJP’s first national government — formed in May 1996 — collapsed within 13 days because it couldn’t muster political support to serve a full term. In 1999, when it won 181 seats in the Lok Sabha, it finally did come to power to complete a full five-year term at the head of a broad coalition government. But it had to drop the construction of the Rama temple — and two other controversial promises — from a common program it had drafted with other political outfits to get their support.

The 2014 elections changed that.

Battle for the Future

With a majority of its own, the BJP now doesn’t need regional parties for the survival of its government. It has also turned the criticism it faces into an electoral magnet, discrediting the opposition and projecting itself as a development-oriented party. In 1992, Advani and Atal Bihari Vajpayee, a future prime minister, had felt the need to express regret. But in 2017, the BJP’s top leadership hasn’t expressly condemned the lynching of Muslims. Modi himself has never apologized for the riots of 2002 and has been slammed by critics for his “Delphic silence” over recent killings.

The datis personae of the 1990s continue to occupy high political offices in India. Uma Bharti, who was at the Babri mosque site and was addressing the mob when the structure was demolished, is now a minister in Modi’s government. Kalyan Singh, then chief minister of Uttar Pradesh state, who described the demolition as “an act of God,” serves as governor of Rajasthan state. New champions of the Hindu nationalist movement have emerged too. BJP president Amit Shah, accused of orchestrating a fake killing, and Adityanath, accused of inciting Hindu-Muslim riots, are among the most powerful political figures in India today, after Modi.

“Today the BJP is unabashedly majoritarian,” says Guha, the historian. With Modi’s government under fire for not being able to create enough jobs and GDP growth at a three-year low of 5.7 percent, there are concerns that the BJP might whip up religious sentiments for political gains. “The fear is that, if the economy falters, Mr. Modi will try to maintain his popularity by stirring up communal tensions,” wrote The Economist in June. “That, after all, is how his Bharatiya Janata Party first propelled itself to government in the 1990s.”

Back in the 1990s, however, the Congress, India’s Grand Old Party that has ruled the country for 54 out of its 70 years of independence, was a formidable bulwark against the BJP. Today, as the principal opposition, it occupies just 44 seats in India’s parliament — the lowest ever in its history. The Left has only 10 members in the lower house. Contrast that with the BJP, which enjoys a majority in parliament and rules –– directly and indirectly –– 14 states.

Unlike other democracies, such as the United States, where streaks of authoritarianism are often checked by the media, India’s record — and its present state — is less optimistic. In Delhi, references to an ongoing “undeclared emergency” — a callback to the two-year period between 1975 and 1977 when the media was formally censored by the then-Congress government — are common. Editors have lost their jobs after their publications carried articles critical of Modi and his regime. Those articles have been pulled down in some cases. With political opposition at its weakest, the press increasingly on a leash and such unbridled power under its belt, the route to Advani’s unfinished agenda from 1992 appears clearer than ever for Modi and his party.

But this agenda won’t succeed, insists Mehboob in Ayodhya. He retains faith in India’s pluralistic nature, which has for centuries accepted people from all religions. “Do these RSS people think they can finish off Muslims?” he asks. “Please understand that this will never happen. Muslims will stay in this country until the world survives.”